A dozen faith leaders among 32 arrested by riot police 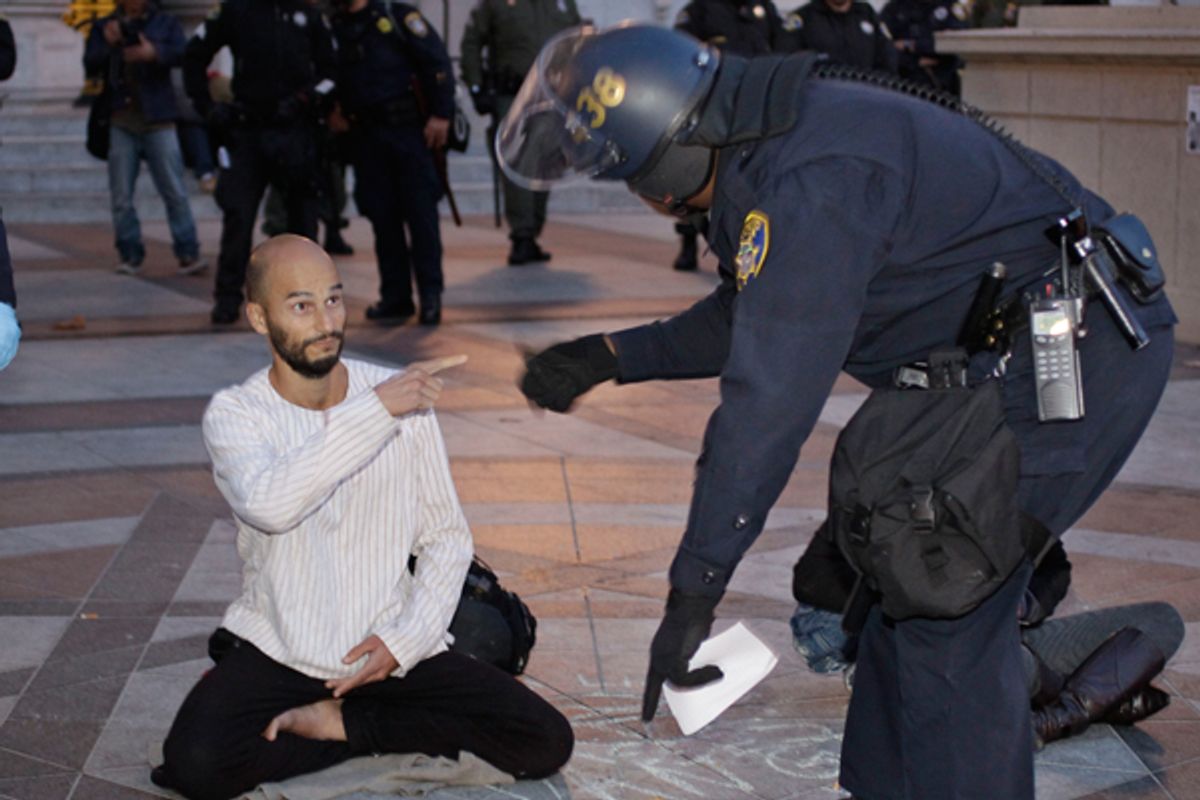 A policeman talks to a demonstrator as police break up an Occupy Wall Street encampment in Oakland on Monday. (AP/Paul Sancya)
--

At least a dozen spiritual leaders were arrested in the evacuation of Occupy Oakland on Monday morning as they sat in a candlelit circle in front of the camp's interfaith tent. They were among 32 people arrested by riot police, according to news reports.

"They wanted to hold the sacred space and be a peaceful presence," said Jon Jackson, deacon at  the First Congregational Church of Oakland, a camp participant who chose not to be arrested. According to witnesses, the arrested included Kurt Khuwald, a professor at the Starr King seminary in Berkeley, Father Joseph Vitale, who has been arrested many times before, and Marcus Leifert, a seminary student at Starr King.

“The Occupy movement wants to make people aware of the gross disparity, which is what Jesus and many other religious leaders want,” Jackson said. Jesus, he noted, “was opposed to government hierarchy” and was always talking about the oppression of the poor.

The  arrests are “signals of moral integrity,” said bystander Emily Webb, a graduate student at Starr King who is training to be a Unitarian Universalist minister. “The people were arrested from a diverse group of traditions representing the fact that we all have something that we hold dear. The system creates hell on Earth for people. The clergy are standing for a world where all can peacefully assemble.”

The interfaith tent had been used in recent weeks by Muslims, Christians, Hindus, pagans and other spiritual groups for religious services, rituals, Bible studies and yoga.

The police action clearing the Frank Ogawa Plaza differed dramatically from the last evacuations two and three weeks ago, which resulted in violent clashes between police and protesters and a severe head injury to Iraq war vet Scott Olsen (who was released from the hospital last week). There were no injuries reported Monday.

The largely peaceful evacuation was the result of the occupiers’ decision to march out of the Plaza after the “cop watch” spotted geared-up officers on their way to the encampment. Occupiers rallied in downtown Oakland’s 14th and Broadway intersection, chanting, marching in a circle, and drumming. The cops marched in between the protesters and the encampment, forming lines and setting up barricades to block marchers from returning. Some cops had their names visible on their shirts, while others had only small white labels with badge numbers and names on the back of their helmets -- not easily noticed if a protester is being attacked by an officer.

When I left the scene at around 7 a.m. Zachary Running Wolf, an occupier who had climbed up a tree when news of a raid solidified, was still occupying the tree with an upside-down flag hung beside him.