The love J. Edgar Hoover does not deserve 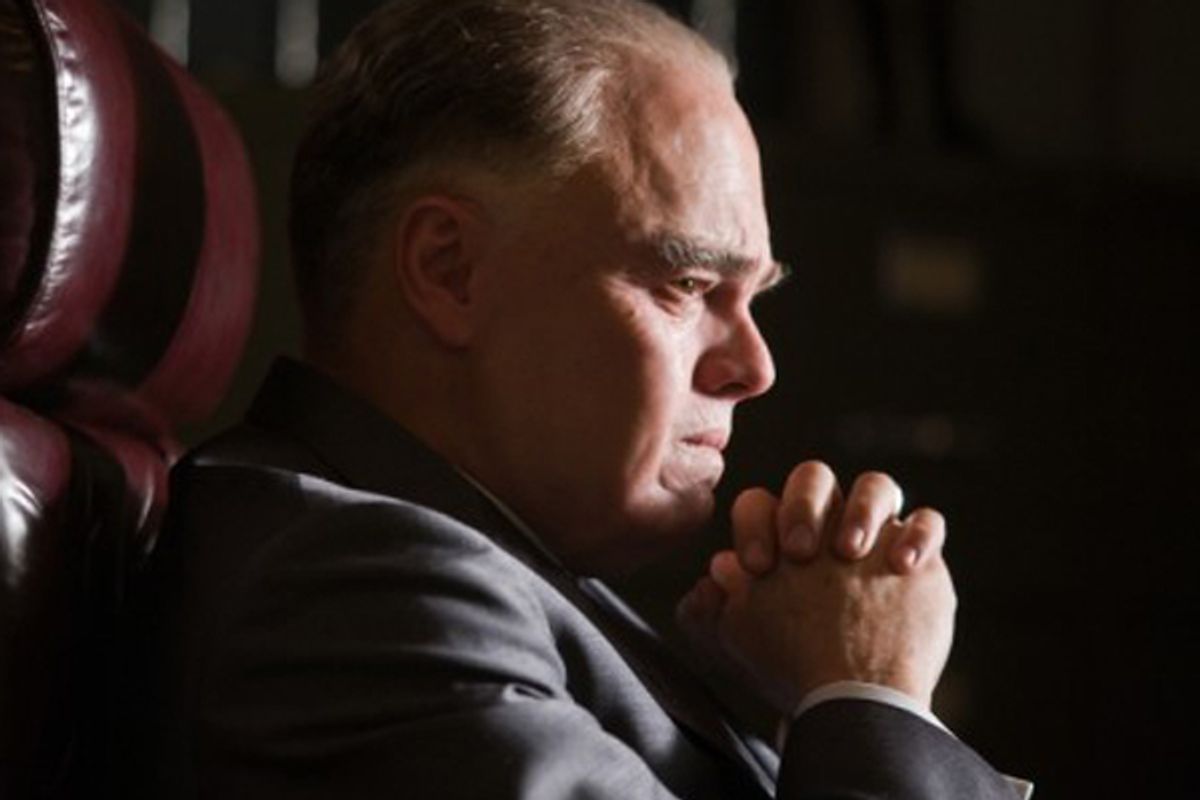 Historic verisimilitude has never been Hollywood’s top priority, and its latest blockbuster, “J. Edgar,” is no exception.

Director Clint Eastwood, who often played the part of a lawman on the big screen, is now serving up what amounts to a brief for the defense of the FBI’s legendary director, J. Edgar Hoover (played by Leonardo DiCaprio).  In the process, Eastwood distorts the historical record, omitting  facts about Hoover’s ruthless abuse of power, and even sanitizing the infamous cross-dressing rumors involving America’s top cop.

The film deservedly gives Hoover credit for establishing the first federal police force that used modern forensics to nab bad guys, especially Prohibition-era gangsters whose grisly kidnappings and murders had captivated the public’s appetite for the lurid underworld of criminals and their molls. Eastwood also provides a plausible rationale for Hoover’s lifelong paranoia about Communism:  Soon after World War I ended, the Washington home of Hoover’s boss, Attorney General A. Mitchell Palmer, was bombed by an anarchist.

But the biopic inaccurately portrays Hoover as a critic of Sen. Joe McCarthy. In fact, the FBI director was a crucial ally of the Red-baiting demagogue.  Indeed, at Hoover’s personal direction, agents spent hundreds of hours perusing FBI files to supply McCarthy with evidence of Communist subversion.   Hoover also coached McCarthy about how to insulate himself from criticism by labeling targets as “loyalty risks” instead of “card-carrying Communists,” which was harder to prove.  A Hoover deputy even instructed McCarthy on manipulating press coverage by releasing his attacks just before news deadlines so that reporters wouldn’t have time to interview the other side.

Nor does the film discuss Hoover’s order to “neutralize” Eastwood’s one-time costar, actress Jean Seberg, by falsely telling journalists that she was pregnant thanks to a leader of the Black Panthers.  Seberg later committed suicide; her family blamed the FBI smear.

The biopic does portray Hoover’s obsession with Martin Luther King Jr., ostensibly because of his ties to Soviet agents, which led to FBI bugs that captured the civil rights leader’s marital infidelity.  But here, too, “J. Edgar” underplays Hoover’s nefariousness.   In fact, the FBI planted listening devices in King’s home, office and hotel rooms, recording more than a dozen large tape reels whose contents Hoover provided to numerous parties: the president and vice president, the attorney general, the secretary of state, the secretary of defense, the CIA, the military, the United Nations, members of Congress, and the press.

What vital intelligence did Hoover disseminate?  That King, according to Hoover, was a “tom cat” with “obsessive degenerate sexual urges.”  The FBI claimed to have recorded King in flagrante during group sex parties in which, according to FBI transcripts, he boasted of his prowess (“I am the best pussy-eater in the world”) and invoked Jesus while in the throes of passion: “I’m fucking for God!”

Ultimately, FBI accounts of King’s sexual antics turned out to be embellished.  Although King committed adultery, a Hoover deputy involved in the smear campaign later admitted that the African-American voices captured on FBI bugs may actually have been those  of King's associates;  to the white agents who made up Hoover’s force, all black voices evidently sounded the same.  Still, that didn’t stop Hoover’s minions from compiling yet another field report that spread the preposterous story that King, after accepting the Nobel Peace Prize, got drunk and chased prostitutes down the hallway of his Oslo hotel -- while stark naked.

Even King’s assassination didn’t stop the FBI’s vilification.  Indeed, the worldwide grief over his murder made Hoover more determined than ever to resurrect the salacious stories about the martyr’s sex life.  This time, the FBI found a willing outlet: columnists Drew Pearson and Jack Anderson, who quoted from Hoover’s classified files about King’s “illicit love affair with the wife of a prominent Negro dentist.”  (Anderson later decided that Hoover had used him to implicate King in “a posthumous scandal, to turn even his death into a sordid affair.”  Three years later, Anderson paid him back by becoming the first prominent mainstream journalist to turn on Hoover -- rifling through his trash, exposing his financial corruption and blackmailing techniques, even hinting that he was gay.)

Perhaps the posthumous vilification of Hoover as a depraved sexual hypocrite is only poetic justice; after all, during his lifetime, he was Washington’s consummate master of sexual slander and political blackmail.  But instead of ignoring the baseless transvestite story, “J. Edgar” attempts to sanitize it and rehabilitate Hoover’s image.

Even Eastwood’s depiction of the FBI director’s relationship with his longtime deputy and confidant -- and reputed lover -- gives Hoover the heterosexual benefit of the doubt.  Although Clyde Tolson (Armie Hammer) is portrayed as Hoover’s loyally swishy sidekick, Hoover returns the adoration with only a manly love, rebuffing Tolson’s overture to turn the relationship physical.  However tormented, Hoover remains in the end closeted even from himself.

To be sure, cinematic license is to be expected in such movies; feature films are not nonfiction biographies.  But given the known facts of Hoover’s life, Eastwood has painted his subject in the best light possible—better than he deserves and infinitely kinder than Hoover ever treated his many enemies, who included some of the most heroic figures of that tumultuous era.

Somewhere, J. Edgar Hoover is smiling: Clint Eastwood has made his day.

Mark Feldstein, Richard Eaton Professor of Journalism at the University of Maryland, is the author of Poisoning the Press: Richard Nixon, Jack Anderson, and the Rise of Washington’s Scandal Culture, just released in paperback.