Yes, talking about 2016 is an absurd, cart-before-the-horse exercise. But let's do it just this once 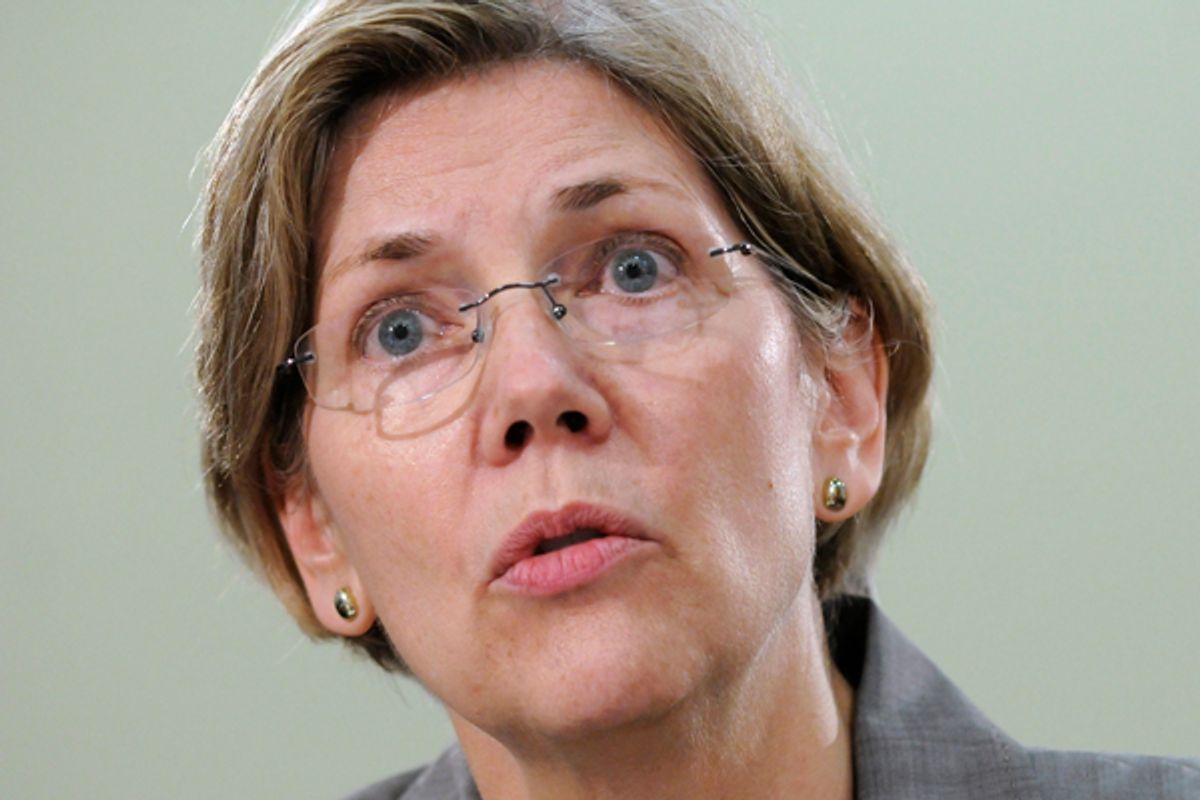 Let me get the disclaimers out of the way first: to write about the 2016 presidential campaign when the 2012 election is still nearly a year away surely seems like an indulgence in the most ridiculous excesses of horse race journalism. And to speculate specifically on a potential candidate for '16 who has yet to win office and whose political career may well end in November '12 only adds to the absurdity.

But bear with me for a minute and consider this new piece from the Hotline, which concludes that Elizabeth Warren, the presumptive Democratic challenger to Sen. Scott Brown, has emerged as "the biggest rock star candidate in the 2012 Senate elections." The energy that Warren has stirred among Democrats in Massachusetts and across the country is undeniable. Her campaign events are packed -- 1,000 people were at a rally this past weekend -- she's raked in big money from grass-roots donors, and her viral video explanation of the social contract has led activists on the left to gush the way conservatives do over Chris Christie: Finally, someone who knows how to explain exactly what we're thinking. The excitement she's generated is testament to how rare and refreshing her voice and her story feel to most Democrats. She stands out.

This is where the '16 angle comes it. Yes, the Massachusetts campaign is just beginning and Warren may well lose. Brown remains very popular personally, with particular appeal to traditionally Democratic blue-collar voters. And if he does fend off Warren, her late-in-life political career will presumably end on the spot. But say she pulls it out. She will then have defeated one of her party's top 2012 targets, a man whose victory in the special election to succeed Ted Kennedy still stings Democrats, and maybe saved its Senate majority too. And she will have done it by waging a genuinely populist campaign, one that thumbed its nose at the elite financial sector cash that so many other Democrats remain addicted to. And there's a good chance she'll have starred in a few more Christie-ish YouTube hits along the way.

Like it or not, the '16 race will essentially begin as soon as the '12 one ends -- and I don't think it's unreasonable to suggest that a Sen.-elect Elizabeth Warren would immediately be touted by press and party activists alike as a potential candidate. Whether Barack Obama wins or loses next year, the Democratic nomination is likely to be open in '16; even if Obama is reelected and Joe Biden (who will be 74 at the end of '16) runs to succeed him, there'd probably be room for some intraparty challengers.

I have no idea if Elizabeth Warren is interested in being president and I have no interest in trying to handicap how she'd fare against other prospective candidates. But we seem now to be witnessing the birth of a new political star on the left. The buzz around Warren is somewhat reminiscent of how Barack Obama and Mario Cuomo were treated after their fame-making convention speeches. If Warren lives up to the potential she's shown these past few months and knocks off Brown next year, we will probably hear an awful lot of talk about her and the White House. And until then, that's all I'll say about this.