The GOP candidate measures a man in terms of sausage and pepperoni -- and with lame, emasculating words 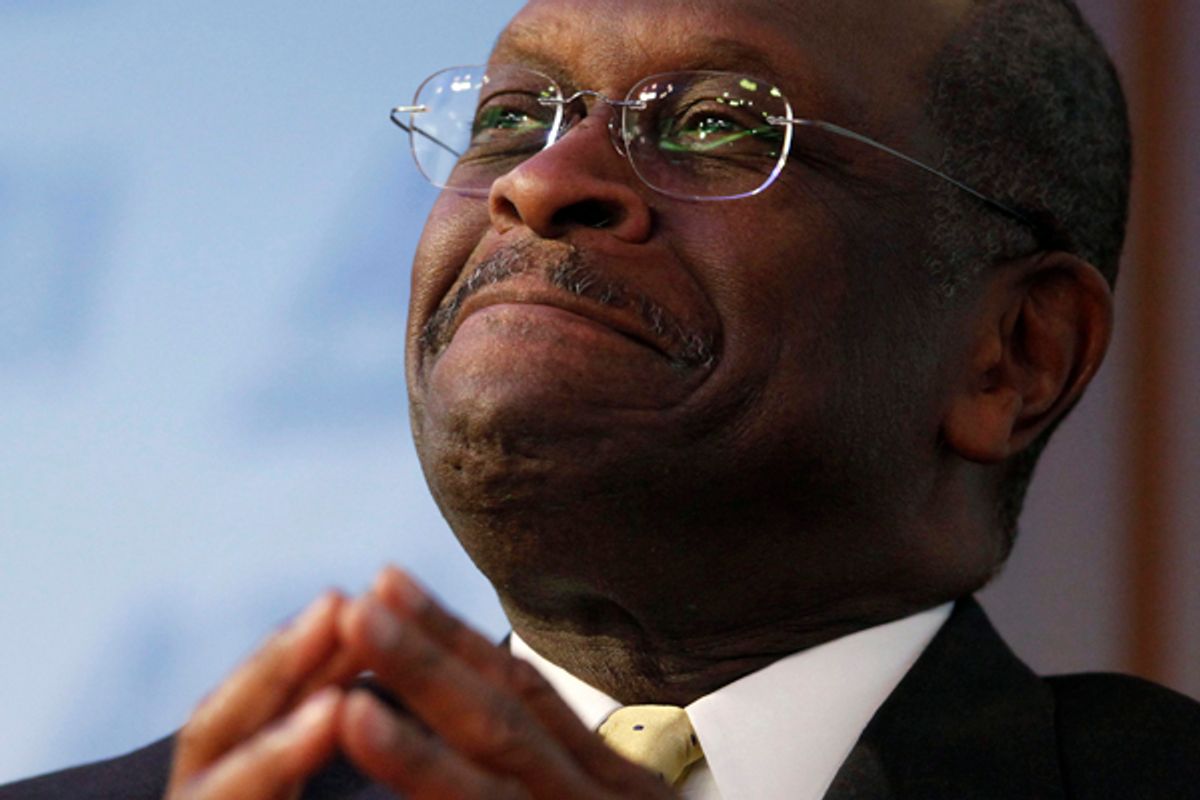 On the spectrum of offensive terms, it's not high-threat-level incendiary. It's not the sort of word you'd have to sprinkle with dashes in print, or refer to as "the s-word" on television. But here's the update for those of you who didn't already figure it out: At this point in human history, calling anything "sissy" makes you look like a dumb bully. Which brings us to Herman Cain.

We already know that Herman Cain is totally butch. Not so butch that he'd need to settle any sexual harassment claims by the ladies, of course! Ha ha! But definitely masculine enough to understand the true measure of a man – not in the achievements he attains, not in the people whose lives he makes better, but by the toppings on his pizza. That's why, in an interview with GQ,  Herman Cain, pizza tycoon, blamer of the poor, viral video star, and man who "totally respects women," philosophized about culinary sex roles.

"The more toppings a man has on his pizza, I believe the more manly he is," he explained. "Because the more manly man is not afraid of abundance. A manly man don't want it piled high with vegetables! " [Side note: America, if you ever elect a man with such appalling grammar to its highest office, wild packs of copy editors with nothing left to lose are going to storm the White House and burn it down.] Cain then explained that a real man would dismiss any pizza contaminated with vegetables as "a sissy pizza." Because Herman Cain's penis isn't having it!

We are still very much evolving in our linguistic sensitivities. There was a time when "gyp" and "Indian giver" were bandied about freely, before people recognized those terms were racially derisive. Now, we wrestle – often poorly – with the multitude of ways we can verbally emasculate a guy. It starts, of course, with implying he's gay. These things are complicated, to be sure. What is outrageous in one context or audience can be the lingua franca in another. "Queer" can be empowering or insulting. "Gay" is fine – except when it's not. "Fag" and "faggot" are still popular, especially among ballplayers. And still unacceptable.

So now, with ever fewer colorful insults at their fingertips, macho men have to go down to the lexicographic C-list to express themselves. All the way down to "sissy" – the tepid "freakin'" of gay slurs. Last month, former Tampa Bay defensive star Warren Sapp railed on "Inside the NFL" that football has "gotten sissified, it really has. I mean, it's a bunch of sissies in there." Last week, a Wyoming high school's head football coach lost his job after handing players a "Hurt Feelings Report" that included a space for the "little sissy" to sign. The form, to be fair to the coach's love of a colorful phrase, also made free with terms like "queer," "pussy," "little bitch" and "woman-like hormones."

When you think of all the awful, hurtful things you can call a fellow human being, "sissy" isn't exactly tip-over-the-dinner-table-and-start-throwing-punches material. This past weekend, Occupy Toronto organized even a "Sissy Stroll" of solidarity. And those who use locker-room-level taunts frequently argue they're just kidding, just busting some balls. Can't you take a joke, everybody?

Yet the implications of the word – primarily as an adjective for all things swishy and supergay, and secondarily as "just not quite Chuck Norris-level manly" – betray a certain grotesqueness of character in those who still deploy it. It says, I'm so insecure about my gender identity I have to go looking for it in the toppings on a pizza. It says, Because you eschew pepperoni, you, sir, are the Cowardly Lion. It boils down to the age-old BS – that to be either a gay man or a female of any stripe is a crippling disability, an individual who is weak-willed and afraid of "abundance." It's a cheap shot. And any man whose concept of himself is so invested in such lazy put-downs is surely a big fat wuss.