Interview With My Bully: The mean girl I can't forget

My bully comes clean, 30 years later: "I was told I was special, so I acted special and better than others" 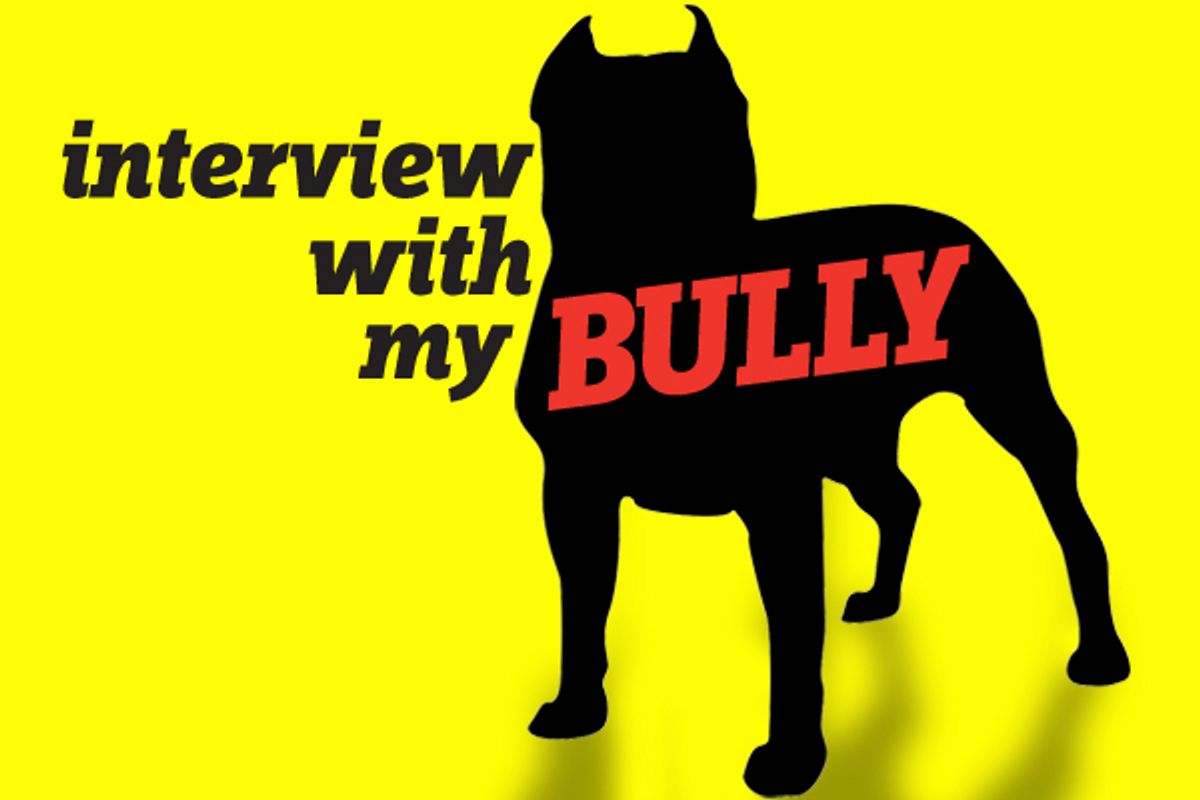 A week before the seventh grade, my family moved for the 13th time. My dad was in the oil business, and we left Indonesia, where I’d had friends, for a small Southern town, where I had none. My only companion dressed exclusively in navy culottes and white button-down shirts, her wardrobe compliments of her Pentecostal religion. We were practically the only two girls without The Hairdo: a feathered Farrah Fawcett cut that necessitated a cloud of Aqua Net hairspray to tame it in Louisiana’s humidity.

Each morning of seventh grade I took the bus to school, and each morning I was bullied by a girl I’ll call Jane.

“Ew -- don’t you wash your hair?” Jane shouted at me from two rows back as her sidekick Kim laughed. I did wash my hair, but apparently once a week was not enough. And I wasn’t exactly the most fashion-conscious kid. In fact, I was pretty much fashion unconscious -- to the point where I could have used some smelling salts and a personal shopper. I thought sitting behind the bus driver would protect me. Instead, he just turned up the volume on the Eagles. (Years before Noriega was tortured by rock 'n' roll music, so was I.) This went on all through seventh grade. That year, I pretended to be sick so often that I’m surprised my parents didn’t whisk me to the local hospital.

But eighth grade would be different! I waited for the bus on the first day of school wearing a maroon skirt and polyester beige shirt printed with cowboy hats and horses. I looked great! But as soon as I boarded the bus, Jane and Kim started to neigh. It was clear that eighth grade was going to be just like seventh -- only with bigger breasts.

Even though it’s been more than three decades since I rode that bus to middle school, I’ve been thinking a lot about it lately. My daughter, Lizzie, recently started seventh grade and I see my old social awkwardness reflected in her. Although she’s met her share of bullies in previous years, middle schools girls are different. They take bullying to new highs (and lows). There’s overt cruelty, shunning someone like an excommunicated Amish, and the kind of mind games that would make Machiavelli cringe. Toss technology in with their newfound freedom and independence and it’s a wicked brew. It makes the kindergarten threat of “You can’t come to my birthday party!” seem charming.

But there’s an added challenge with Lizzie in middle school. I’ve brought my past to her school experience. I have to constantly remind myself that she’s not me and that she handles mean girls differently than I did -- which was basically to sink into myself. She attends a school with a no-bullying policy that has teachers who help kids work though social dynamics. (At my school, they practically taught classes in bullying.) Lizzie feels safe telling someone they made her feel bad. And she also feels comfortable -- for now, anyway -- talking to her dad and me about being excluded. But when a girl rips Lizzie’s poetry out of her notebook or sends a vicious email, uninviting her from a much anticipated group outing, I’m right back on that school bus.

One day, my husband gently suggested I try to find Jane. Maybe it would help ease my own pain and prevent me from imposing my own past on my daughter's. Actually, I did talk to Jane about it one time -- in eleventh grade. I had bumped into her at a Catholic school I briefly attended. As we shared a cigarette behind a bus during recess, away from the nuns’ prying eyes, I inquired why. She studied the ground and flicked an ash. She didn’t answer, but looked embarrassed. A bell rang and we went back to class, matter dropped.

Thirty-five years later, I have a family and a profession that I love. I’m happy, healthy and (most of the time, anyway) well-adjusted. I have wonderful friends. Still, when I looked Jane up on Facebook and sent her a note, I reverted back to my old teenage self, shyly suggesting that I was sure she wouldn’t remember me, but could I ask her a few questions.

An hour later, I heard back. I was right. She didn’t remember me, but said she would love to hear more. I responded that I’d hated middle school and now that my daughter was that age, I was sifting through memories and trying to sort the then versus now and see how it all fit together. I asked if she remembered the bus ride to junior high school. I was honestly curious if she had any recollection of it. Middle schoolers assume they’re living under a giant klieg light and that everyone is watching their every move. But while she didn’t remember me -- she definitely recalled being cruel.

“Oh yes, I was the mean girl,” she wrote. “No doubt. When we shared the cigarette (I can’t believe you remember that!), I’m hoping I was embarrassed and was on my way to changing. But I did change -- when I went to college and met really mean girls.”

When I asked Jane why she’d been like that, she said she thought it came down to three reasons. She’d felt an enormous sense of entitlement. “My mom put me up on a pedestal and I was told I was special, so I acted special and better than others.” She’d come from a family of huge personalities and, as she put it, “I was an attention whore -- positive or negative.” And it turned out she’d been bullied herself in fifth grade. “My bully was brutal and the police had to get involved. That kid took a lot from me emotionally, physically and materially. He actually ended up much later going to prison for murder. And I know what you’re thinking -- if I was bullied, why would I become one? Because if I was mean first then others would be afraid of me, not the other way around.”

“I just wish I’d known back in middle school what I know now, but we both know that’s not how life works. I’m sorry I made fun of you and your hair and made the bus ride a nightmare. I’m sure today we’d both enjoy each other’s company -- well, I hope you’d like me!”

So what about me -- why hadn’t I stood up to Jane in junior high? I didn’t have a “Bully me!” sign taped to the back of my polyester horse-printed shirt, but I might as well have. Because we’d moved so many times, I was shy and quiet. And shyness was a social liability like corrective shoes, headgear or a love of fantasy in a school that seemed to reward the extroverts and popular kids who liked things like football and cheerleading. I became a passive victim, guzzling a bully-me cocktail: mix together equal parts low self-esteem and social awkwardness with a dash of desperation and stir.

With Lizzie, it’s different. We talk about many things that I never did with my parents as a kid. I may have passed my shyness on to Lizzie, like a family heirloom, but she seems to feel more comfortable in her skin than I did as a middle schooler, even with her slightly dyslexic reading of social cues. I know I can’t buffer her from every mean girl and from every disappointment, as much as I’d love to do so, but I’ve found discussing with her about how I was bullied seems to help keep the dialogue going. When I told her I contacted Jane, she seemed surprised. “The bus bully?” she asked. I told Lizzie I wished I’d said something to her a long time ago. Lizzie nodded.

Jane now has a 15-year-old daughter and so she is extremely cognizant of bullying and its effects. “I’m working very hard at teaching her to not be critical and to be accepting of others who are different but she gets frustrated with me.” In fact, she later shared our conversation with her daughter, admitting to her own daughter that she’d been a mean girl all those years ago. She wrote that the revelation left her daughter speechless.

And, just like that, more than 30 years after Jane had made me last cry, she did it again.