Last night at the Zuccotti barricades 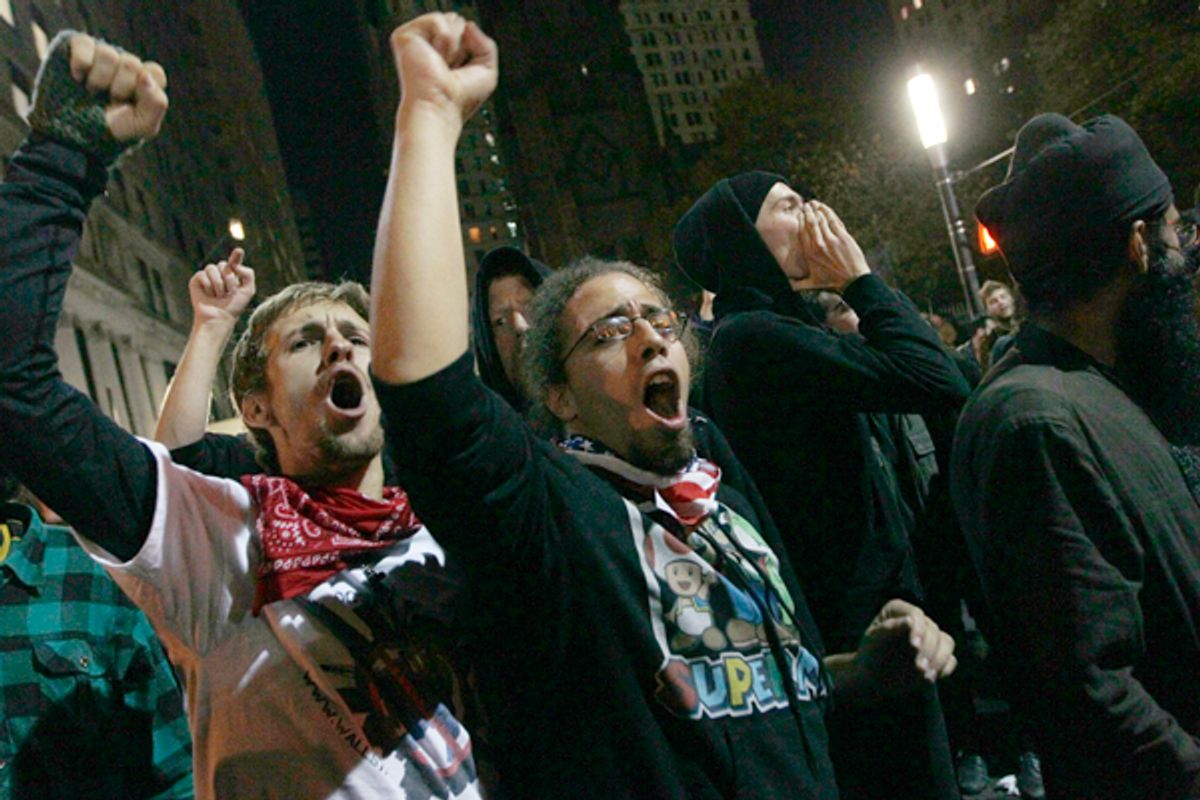 I hopped on my bike and rode over to see what was happening. Biking there turned out to be a lucky accident; when I arrived I saw on Twitter that the Manhattan-bound side of the Brooklyn Bridge had been shut down and some subway lines weren’t running downtown.

I tried to get as close to Liberty Square as possible, but the NYPD had erected a buffer zone of two or more blocks completely around the park. The resulting media blackout was well-documented this morning, and I couldn’t see any of what was actually going on as the police moved in.

The police began forcibly moving protesters gathered around the barricades north on Broadway with their batons held out, parallel to the ground. At one point about 30 people sat down on the sidewalk outside the Payless store as an act of civil disobedience. The police issued a dispersal order but didn’t move in, and the situation seemed to calm down temporarily.

Shortly after, however, the police formed a line and once again began using their batons to shove the mass of protesters backward, toward Cortland Street. At this point the police became aggressive, rushing into the crowd to grab protesters and using pepper spray. The crowd began moving north more quickly at this point, though police continued to arrest activists standing on the sidewalk attempting to obey their orders.

A video I took on my cellphone and posted to Twitter shows police then formed a gauntlet to remove the protesters who were still on Broadway. They stood in two short parallel lines and flung protesters in the general direction they were instructing us to go, an action that resulted in many people tripping over each other, which was followed by police using their batons to clear those who were attempting to witness the arrests.

It was around this time that those gathering in Foley Square began marching. On this march I witnessed several egregious examples of police misconduct. Compared with the Occupy Oakland solidarity march from earlier this month – which followed a similar route – the police behavior was far more aggressive and provocative. Two women were arrested while they were marching on the sidewalk a few feet in front of the rest of the march, seemingly unprovoked. There were several instances of police rushing through marchers like deranged rugby players, possibly in an attempt to arrest a specific person on the other side of the group.

A medic I spoke with estimated that between 30 and 40 people had been pepper-sprayed just around the kitchen area alone. I was hit with a baton on the leg and pepper-sprayed simultaneously after briefly stepping off the sidewalk, and although neither did significant damage I can confirm that both of those things are very unpleasant, and also make it difficult to document police abuse. It’s hard to shoot video when you’re temporarily blind.

The march got as far north as Broadway and Great Jones, after which it turned south, eventually winding through the narrows of the financial district to its ultimate destination of Broadway and Pine, where a large group had already congregated. The situation there was mostly calm, although a friend of mine was arrested and I was recently told that he suffered a concussion during his arrest.

This morning showed that Mayor Bloomberg and Commissioner Kelly are not trying to win a P.R. war or demonstrate restraint. I’ve for the most part defended the NYPD over the past two months. This morning, though, they had a collective viciousness that I haven’t found to be present on a large scale before. This tactic, however, will backfire. If recent history is any guide, we can expect Thursday’s planned actions to attract even more participants than they would have otherwise.