Newt Gingrich: His baggage has baggage 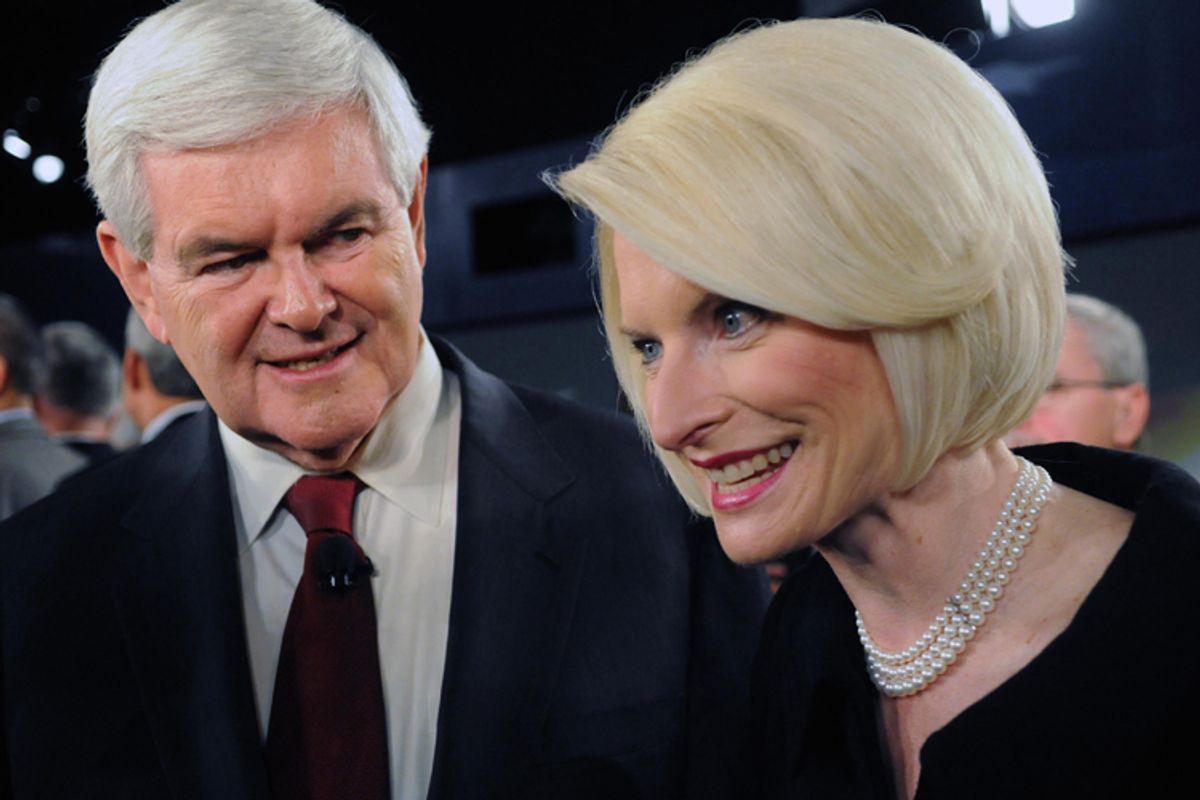 The GOP presidential primary is a lot like a kindergarten t-ball game: When it comes to being in first place, just about everybody gets a turn. And now, congratulations, Newt Gingrich: It's your turn!

Steve Kornacki wrote about the Public Policy Polling survey that found Gingrich is following in the footsteps of Donald Trump, Michele Bachmann, Rick Perry and Herman Cain as the Republican flavor of the week. Gingrich benefits from three things: A lot of Republicans can't stand Mitt Romney, Cain and Perry have shamed themselves in public, and by contrast, he's had no bad debates. So far he's come off as smart and affable, trying to rally his rivals against the big, bad media that's trying to get them to fight.

Since Gingrich has mostly been in single digits, far back in the polls, his rivals have humored him and ignored his liabilities. That's about to change, and Gingrich, like Perry, Cain and Michele Bachmann before him, will likewise wither under the hot sun of political scrutiny. The seemingly affable professor and author is a hothead with many political liabilities and almost as many enemies. He's committed so many political and ethical transgressions that his baggage has baggage.

Gingrich is probably best known for serving his wife with divorce papers while she was recovering from cancer surgery, so he could marry his mistress, whom he later divorced to marry a staffer. But he's also probably the only politician, who when you're asked "What's the worst thing he's done?" has done a lot of things that rival leaving his cancer-stricken wife for his mistress. For most people in the world, in fact, that would be the hands-down worst act ever; for Gingrich, it's just not that clear-cut (h/t Jamie Kilstein).

For instance, he's the only House speaker in American history to be disciplined by Congress for ethics violations.  In 1998, he paid a $300,000 fine after he was found to have been misusing his tax-exempt foundations for political gain.

OK, those have to be the two worst things, dumping his wife who had cancer for his mistress, and congressional ethics sanctions, right?

But wait, but there's more:

But my all-time favorite Newt Gingrich "worst" was the time he blamed the horrendous case of Susan Smith, the South Carolina mother who murdered her young sons in 1994, on Democrats. Smith, you'll recall, first blamed her son's drowning deaths on a black man who supposedly car-jacked her, but it turned out, she did it herself. Just before the 1994 election, in which his party swept back into power, Gingrich said:

I think that the mother killing the two children in South Carolina vividly reminds every American how sick the society is getting and how much we need to change things. The only way you get change is to vote Republican. That's the message for the last three days.

Two days later, Gingrich defended his comments by insisting he'd been saying the same thing for years: that Democratic rule had frayed the moral fabric of the country: "We need very deep change if we're going to turn this country around." Asked directly if he was saying electing Republicans could stop killings like Smith's, he said flatly: "Yes. In my judgment, there's no question."

He later blamed the Columbine and Virginia Tech killings on liberals, too. But his Susan Smith lies were a special kind of awful, and that's my pick for Gingrich's worst act. Politically, though, I think his callous divorces will hurt him more. What do you think? Let us know in the comments section below.

I talked about Gingrich with E.J. Dionne on MSNBC's "The Ed Show" Monday night: