The day after mass arrests, the general assembly vents and vows to mobilize 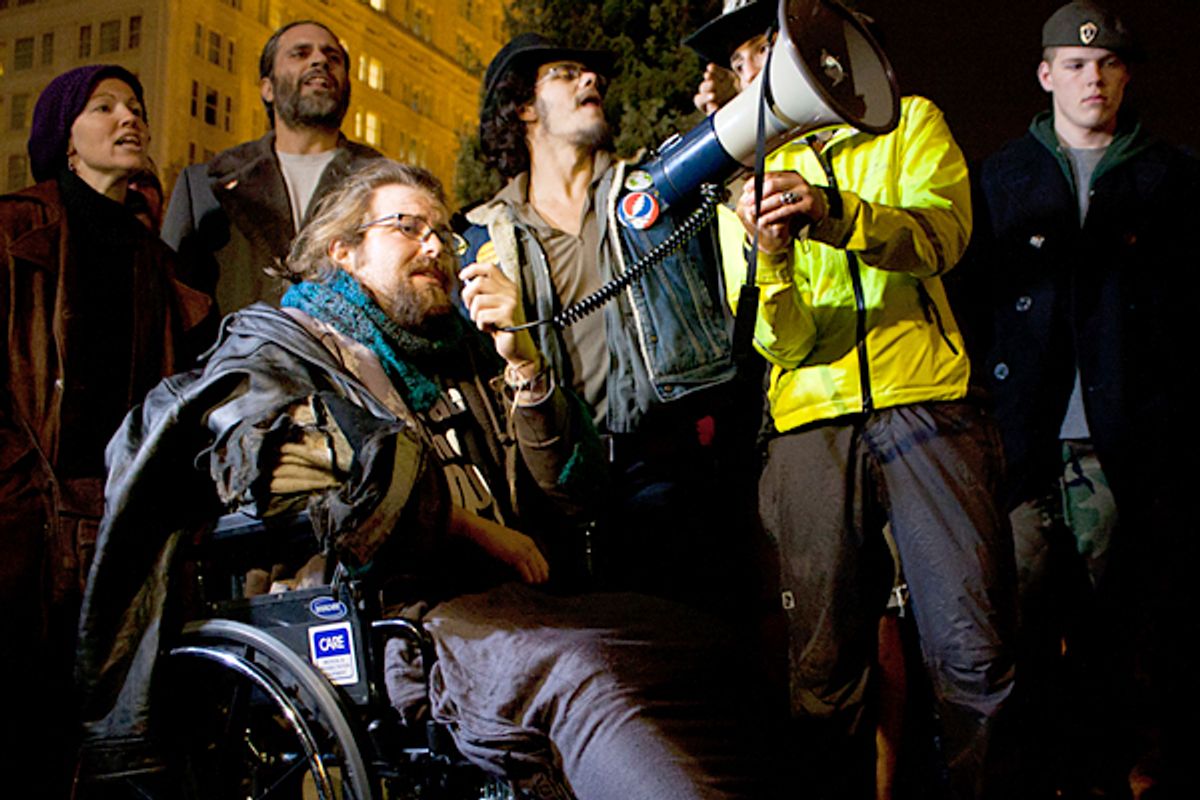 PORTLAND, Ore.--After the mass arrests that took place here on Sunday there was a lot of worry among demonstrators  that Occupy Portland would cease to exist, but the general assembly on Monday night proved otherwise. With approximately 400 attendees and an additional 850 people watching a live stream on the Occupy Portland website, the gathering in Pioneer Courthouse Square demonstrated, as one protester said, that “you cannot attack peace with violence and expect us to dissipate.”

Justin James Bridges, aasaulted by police and arrested on Sunday, arrived from the hospital in a wheelchair to declare “the police are baldfaced liars.” Another speaker rejected the claim that everyone who supports the Occupation is young and radical by saying that “among the 51 people arrested this weekend, the youngest was 16 and the oldest was 81.”

The central question of the assembly was: What to do next? Many protesters want to move to a building because of the winter, but others seem fine with occupying another park or even the football field at the old Washington High School that is no longer used. Those who preferred to go inside for the winter suggested renting a warehouse, occupying the old high school building itself, or staying at the First Unitarian Church, which has been encouraging members of the Occupation to come to its services and was used as a place of refuge by many occupiers after the parks were cleared on Sunday. There was also talk of occupying universities in Portland.

The assembly gave the victims of the police action the chance to bear witness. Bridges told of yelling at the police, “I have a broken back!” which was reemphasized by onlookers. Unfortunately, he said, this didn't stop the policefrom from zip-tying him, and ultimately mocking him while choking him. “We will continue to hold assemblies and exercise our rights to assemble peacefully as long as it takes,” he vowed. (An organization in Minnesota is putting on a benefit show to pay for Mr. Bridges' medical bills.)

Participants in the assembly told of a distinct change in police tactics over the course of the weekend.

“The cowards who showed up yesterday were not the same men who showed up the day before," Bridges said. Sarah Morrigan, who has been participating in the Occupation regularly, said there was a “180 degree shift,” in the way that the officers treated the occupants from Saturday to Sunday. Raya Cooper, a regular volunteer, says she was “shoved relentlessly” and “attacked on a public sidewalk,” amid unprovoked violence from the police with their batons. She also claimed that she saw the police kill a 6-week-old pit bull puppy, a casualty that could not be confirmed.

Another occupier named Charles, who is approximately 19 and goes by the name of Earth Child, says, “I was singing songs, locked arms in a group, when the police grabbed me by the hair and pulled me so hard they tore it out. I curled up and laid down on the ground but they carried me and dropped me on the cement multiple times and stepped on my head.” He said when he told this story at the hospital, the staff recorded his injury as a “hallucinogenic related disorder.”

The sense of the assembly in closing was that the demonstrators should continue to mobilize. In the end a series of protests were announced, including a sit-in on "Black Friday," the day after Thanksgiving; a walkout at Portland State University this Wednesday; and an Occupy the Banks march this Thursday. Occupy Portland isn't going away.

Raphael Deem is a musician and writer in Portland, Oregon. Follow him @raphaeldeem.