Sandusky admits "horsing around" but denies sex with kids

On NBC's "Rock Center," the former Penn State coach said he "horsed around ...without intent of sexual contact" 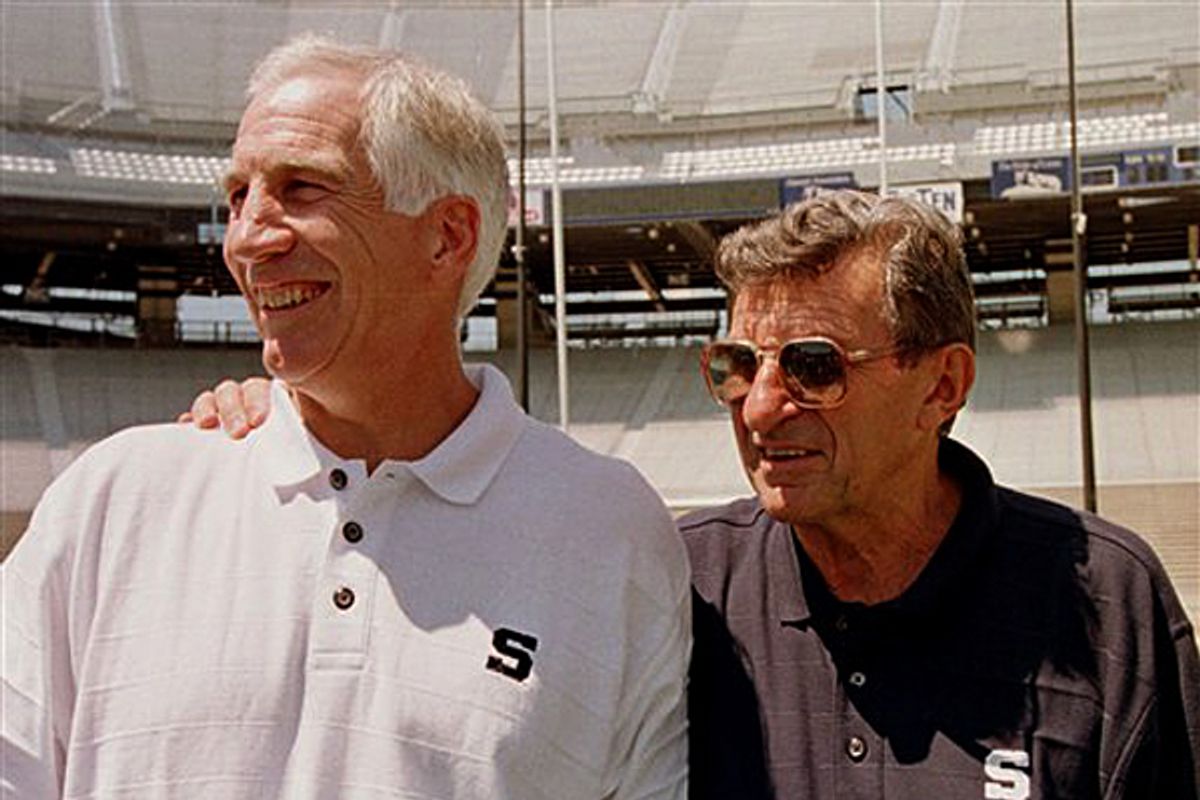 Former Penn State assistant coach Jerry Sandusky said during an NBC interview last night that he had no sexual contact with the boys he'd been accused of abusing. "I am innocent of those charges," he said.

Sandusky, who was arrested Nov. 5 and charged with 40 counts of sexual abuse, is free on $100,000 bail. In a phone interview with sports reporter Bob Costas that aired on NBC's "Rock Center," Sandusky said he was not sexually attracted to young boys. When Costas pressed him on the eyewitness accounts and asked if he was "falsely accused in every aspect," Sandusky said, "Well, I could say that, you know, I have done some of those things. I have horsed around with kids. I -- I have showered after workouts. I have hugged them, and I have touched their leg, without intent of sexual contact, but um ... So if you look at it that way, uh, there are things that would be accurate."

"Are you denying that you had any inappropriate sexual contact with any of these underage boys?" Costas asked.

"Yes, I am," Sandusky replied.

When Costas brought up an incident in which graduate assistant football coach Mike McCreary said he saw the coach "forcibly raping a boy who appeared to be 10 or 11 years old in the shower," Sandusky said, "I would say that that's false." Costas followed up by asking Sandusky why the graduate assistant would lie about such a thing. Sandusky replied, "You'd have to ask him that."

The interview aired last night on Brian Williams' NBC newsmagazine "Rock Center," and appears to have been sudden and unexpected, as it was not promoted in advance of the broadcast.

NBC's "Today" re-aired portions of the piece this morning and interviewed Sandusky's lawyer Joseph Amendola, who said his client "has wanted to talk about this for a long, long time, going back to the first allegation."

"He didn't use a whole lot of common sense," Amendola said, then went on to invoke the false allegations of satanic ritual abuse in day care centers in the 1980s, and implied that the allegations against his client were motivated by a desire to get money from Penn State. Amendola also said he had contacted the alleged victim of the attack witnessed by McCreary in 2002. He said this person "is now in his 20s" and "he's saying it never happened."