What actually could derail the Cain campaign 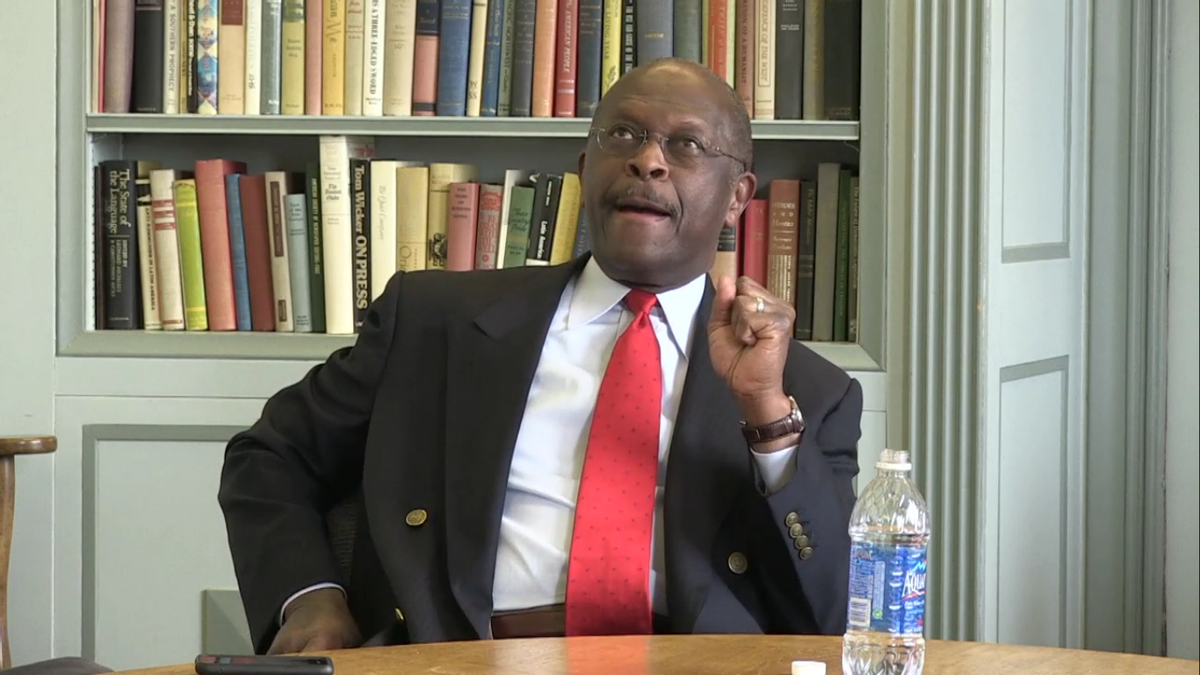 For two weeks, Herman Cain has mostly weathered revelations of past instances of alleged sexual harassment, adamantly insisting  that he's never engaged in improper behavior toward any women even as two went public to say he had. Cain's poll numbers have ebbed a bit, but not as dramatically as many believed they would when the story first hit.

His endurance has been a gift from influential right-wing commentators like Rush Limbaugh and Sean Hannity, who have pleaded with their audiences to view the allegations as a smear by liberals and their media allies. And now Cain is getting some additional -- and belated -- help from his wife, Gloria, who used a pre-taped interview that aired Monday night on Fox News to brand the charges "unfounded."

But whatever success Cain has enjoyed in containing the damage might be undone by the Rick Perry moment he suffered through in an interview with the Milwaukee Journal-Sentinel Monday. The clip, if you haven't already seen it, rivals Perry's painful and futile quest for the name of the third Cabinet department he wants to cut, with Cain responding to an innocuous-seeming question -- "So you agreed with President Obama on Libya?" -- by filling five minutes with a few half-formed thoughts and plenty of dead air:

Not surprisingly, this was an instant viral hit. And it has the potential to inflict some serious damage on Cain's candidacy -- more, perhaps, than the sexual harassment story has caused him these past two weeks.

For one thing, his basic unfamiliarity with a war in which the United States just participated is so apparent that there's really no way to concoct a cover story. (For the record, the Cain campaign tried to chalk it up to the candidate only receiving four hours of sleep the night before.) Nor does it help that it's part of a pattern with Cain, who made a similarly public demonstration of glaring foreign policy ignorance earlier this year when he seemed utterly unfamiliar with the concept of the Palestinian right of return.

And even if he could come up with a cover story, it's not like there's an incentive for the conservative opinion-shapers who have been Cain's allies during the sexual harassment saga to carry water for him here. There's no liberal conspiracy to allege; this is just a presidential candidate who's not particularly good on his feet trying to wing it on a major topic.

But what's really a problem for Cain is the timing. The wide dissemination of this clip comes not only as he's dealing with the sexual harassment story but also as his grip on the default non-Mitt Romney slot in the GOP field is slipping. Polls are now beginning to show Newt Gingrich climbing past Cain and into second place in the race. One survey released Monday actually put the former House speaker in the lead with 28 percent.

A viable-seeming Gingrich campaign is a real problem for Cain, because it provides an inviting outlet for any Cain supporters who have begun having doubts about him but who've resisted defecting simply because they want to make sure there's a strong non-Romney candidate. But with conservative masses now warming up to Gingrich (at least for the moment), the attention and ridicule that Cain's Libya gaffe is generating could be the catalyst that finally convinces many of his soft backers that he's just not ready for prime time and that they might as well have some fun with the GOP race's new bright, shiny object.

And what a good time it suddenly is to be Gingrich. Think about it: The vast majority of Republican primary voters just don't seem interested in lining up with Romney until and unless they have to. But Cain, the alternative many of them latched onto in the past month, could now be losing their confidence. And it's not like anyone else is poised to fill the void if Cain does fade out -- not Perry in the wake of last week's debate, not Michele Bachmann since she talked about HPV vaccines, and not Rick Santorum since he announced his candidacy. But then there's Newt, now over 20 percent in most polls and even closing in on 30 percent in one.

In the long run, there's still good reason to believe those numbers won't last for Newt. But in the short term, they may be in for a boost -- thanks to Cain's new viral debacle.