Can co-sleeping kill your baby?

A controversial ad suggests sharing a bed with a baby is as dangerous as letting it play with knives. Is it true? 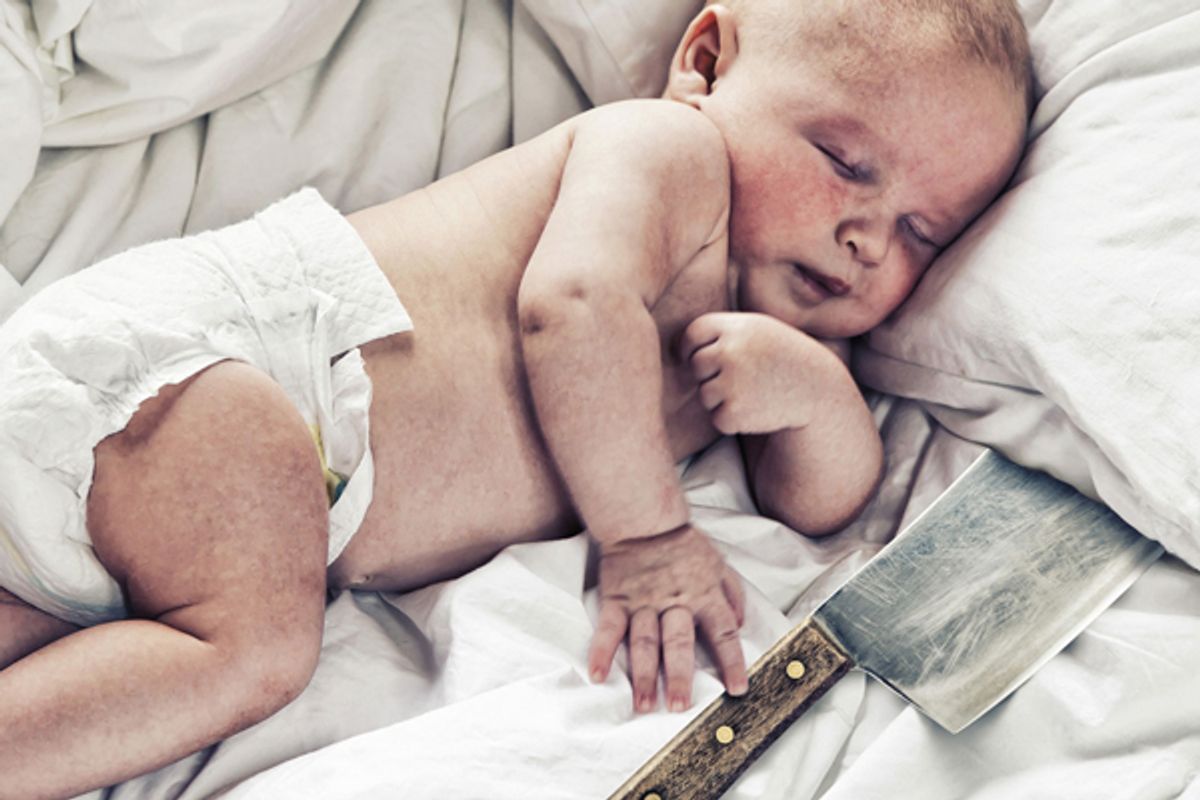 Do you hate your baby so much you'd let her sleep with you? You want her to die, is that it? In a provocative new public service announcement from Milwaukee's Health Department, the message is clear -- "Your baby sleeping with you can be just as dangerous" as putting her down with a knife Michael Myers might have used in "Halloween."

The ad's imagery is not subtle. It does, however, make you wonder what other alarmingly dangerous ideas the filmmakers ran up the flagpole before coming up with a butcher knife. A baby dozing peacefully in a meth lab? A sweet little cherub clutching a hand grenade, riding on a feral cat? An infant cuddled close to Charlie Sheen? But in a place where the infant mortality rate rivals that of third-world countries and sudden infant death syndrome is a top killer, maybe a shocking warning is just what the doctor ordered.

Just last week, as the new campaign kicked off, a 7-week-old Milwaukee infant was reported dead after allegedly sleeping with her mother. It's an all-too-common event in Milwaukee. The problem is especially pressing in the city's African-American community, where the infant mortality rate is a staggering 13.8 per thousand births, vastly outpacing that for white babies – a still-troubling 5.9 per thousand births. Last winter, the city's commissioner of health, Bevan K. Baker, called the situation "a public health crisis" that has "moved beyond the tipping point."

But is kicking the baby out of bed the solution? Co-sleeping is not the only risk factor for SIDS. A crib with soft, loose bedding or stuffed animals is a potential threat as well. There's evidence that some infants – those with low birth weights or cardiac irregularities, for example – may be predisposed to SIDS. And it's hardly a coincidence since the American Academy of Pediatrics started recommending babies sleep on their backs in the '90s, the overall SIDS rate has dropped by nearly 50 percent.

Co-sleeping, meanwhile, has its vocal champions – including plenty of children throughout the world who have grown up just fine after sharing a bed. Dr. William Sears, who wrote the book on baby sleep and attachment parenting, argues that "the SIDS rate is lowest (and even unheard of) in countries where co-sleeping is the norm, rather than the exception."  And lots of parents and babies just enjoy the ease and closeness of it.

It doesn’t have to be all or nothing, though. The American Academy of Pediatrics suggests sleeping near one's infant "for more convenient breastfeeding and parent contact," but to avoid sharing a bed. For those who opt to go for it, the AAP reminds there are real risks that every parent needs to know. Babies need to be protected from bedding in which they can smother, from slats and rails, and from falls. They're also at considerably higher risk of injury or death in a bed with a parent who's been consuming drugs, alcohol or smoking -- and who might unknowingly roll onto them.

Though Milwaukee Mayor Tom Barrett admits that the new ads are shocking, he says, "We have to send a message in this community that co-sleeping deaths are the most preventable form of infant mortality in this community." The city says that more than half of the 89 SIDS fatalities between 2006 and 2009 involved "sleeping in an adult bed at the time of their death."

There's more detailed information and suggestions at the city's website. After all, an ad at the bus stop that explains the merits of parking a co-sleeper next to the bed, taking away all the fluffy blankets, or not having a few drinks before passing out next to your little bundle of joy is not an ad that will grab a passerby. It's faster and easier to scream, "It's like putting down your baby next to a scary piece of kitchen equipment!"

The ads are grabby, even if they're not completely accurate -- and may sadly discourage responsible parents from enjoying successful co-sleeping. But for now, it's hard to argue with Mayor Tom Barrett's assertion that "If the ads make some people uncomfortable, I guarantee it's a lot less uncomfortable than having another baby die from co-sleeping."