Hip-hop moguls yearn to belong to the 99 percent 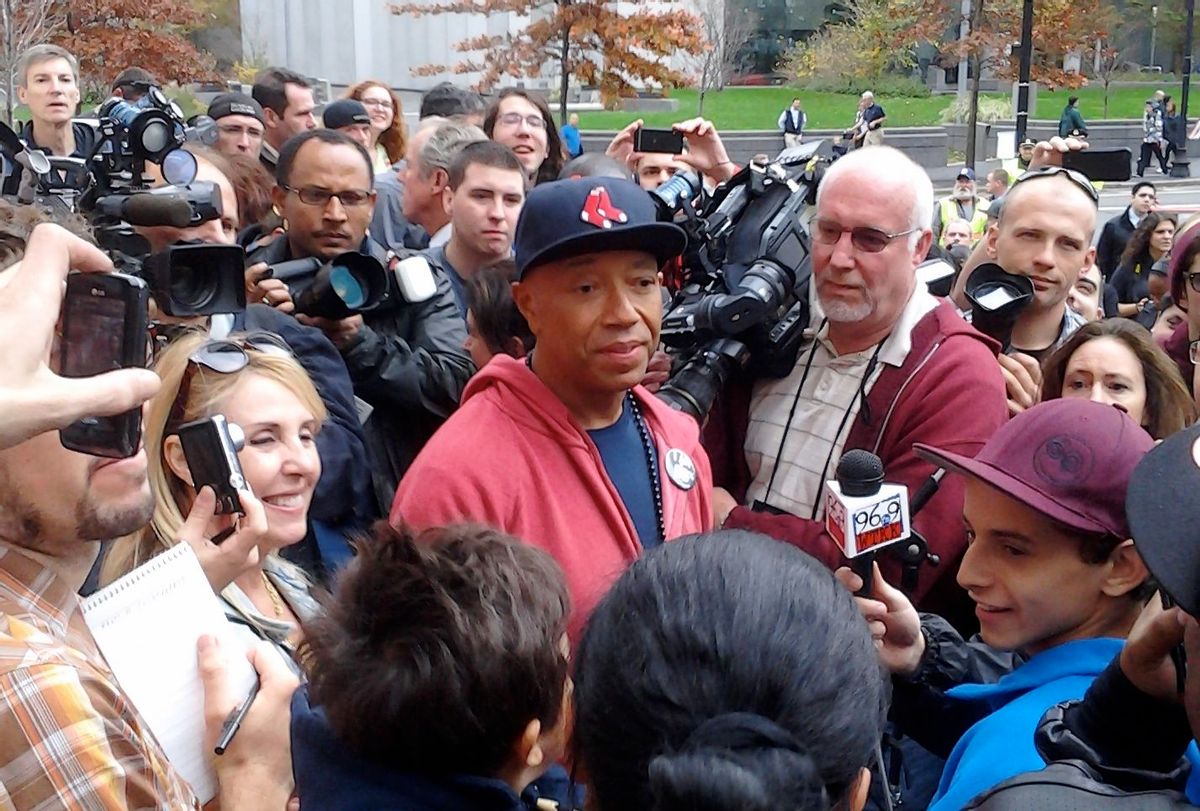 BOSTON -- Hip-hop mogul Russell Simmons defended fellow superstar Jay-Z from a firestorm of recent media criticism on Tuesday telling a small crowd outnumbered by reporters at the Occupy Boston site that the criticism of the celebrated rapper-businessman was misguided.

Jay-Z, aka Shawn Carter, the  frontman for the soon-to-be Brooklyn Nets NBA basketball team, has been blasted by Salon and others for trying to cash in on the Occupy Wall Street movement by selling branded merchandise with an OWS theme.

Simmon was visiting Occupy Boston out of sympathy for the anti-corporate movement that has swept America in the last two months and left certain self-made multimillionaires eager to highlight their social sympathies.

Simmons, co-founder of pioneering Def Jam Records label and chief of an entertainment business empire, insisted that Jay-Z’s loot from the now-canceled clothing deal would amount to “less than what it what it would cost him to buy one earring back for Beyonce." Jay-Z, he said, "doesn’t even own the company. He sold it years ago. But just by wearing the shirt he’s inspired lots of kids who might not know about the movement.”

True enough. But spreadsheets don't lie. Jay-Z sold Rocawear, the urban-style apparel company that he co-founded, for $204 million in cash to the Iconix Brand Group, back in 2007. He stood to turn a profit on the licensing of the company's  “Occupy All Streets” line of clothing -- that is, until it was abruptly abandoned in response to the brouhaha.

Simmons did not shy away from questions about his own business achievements, which have landed him squarely in the 1 percent of the income bracket.

“I benefit off the tax code but I’m ready to pay more taxes,” he said, while sporting a 99 percent button on his hooded sweat shirt. “I don’t like it that my secretary pays more in taxes than me. I’d rather give my money to charity than the war machine.”

Wearing yogi beads and bravely sporting a New York Yankees cap smack dab in the heart of Red Sox Nation, Simmons arrived at the Dewey Square encampment alone at noon and spoke for 30 minutes about what he called “a government gangstered by corporations."

At the same time, he defended a man's right to swing a deal for his own corporation. To suggest otherwise, he said, was a diversion from the core issues of corporate greed and legalized bribery.

“To say it’s hypocrisy is an insensitive thought process,"  Simmons said.  "If you think that one person who has resources cannot get involved, then that’s just sad."

Well-to-do celebrities are not like the meanies of the 1 percent, he said, not at all.

Asked why his own corporation does not make clothes in America, Simmons said that as a competitive businessman he had no choice but to position himself in a global market where labor is cheap.

“Because my company would close and all the workers would lose their jobs,” he said flatly.

Taking on the Tea Party

Simmons says he is part of the 99 percent.

He said he has been at the Occupy Wall Street “nearly every day." He said he was buoyed (prematurely, it turned out) by a report that a New York district judge had ruled that the protestors should be allowed back into the park with all their camping gear. The judge, it seemed, had overruled billionaire New York Mayor Bloomberg’s order banning protesters from returning with tents and sleeping bags.

“They tore up our library, our kitchen, our first aid facility, but they can’t tear up our movement,” he said of the actions of the New York Police Department. (At the end of the day, it was reported that the judge had actually upheld Bloomberg's actions.)

With two TV news copters hovering overhead, Simmons urged the Boston protesters to push for a ban on lobbyists in the nation's capital and a constitutional amendment to institute publicly financed campaigns.

Simmons said ridding the Hill of lobbyists makes more sense than beating up on Jay-Z for not realizing that an anti-corporate revolution cannot be easily merchandised.

“Everybody’s got a different role,” he said. “My role” -- and Jay-Z’s presumably -- “is to give money and act as a mouthpiece."

“I tweet all day about this and spiritual matters," he went on. "So the social media is making all the difference in the world, all over the world."

“Personally, I think we need to do a lot more with Occupy the Hood,” he said. Occupy the Hood is a Boston offshoot of  Occupy Boston that has sprung up in the bullet-scarred Roxbury section of Boston. “It’s been said that if white people have a cold, then black people have pneumonia.”

Simmons blamed two long wars, high healthcare costs, and the ever-expanding prison industrial complex -- an issue close to the hearts of people of color -- on the best government that 35,000 Washington lobbyists can buy.

“I don’t like the idea that a lobbyist can meet with a politician and then go home and send money for him to vote to go to war," he said.  "It’s legalized bribery and I think all of us know it’s the core of our problem.

“Ending corporate greed is another topic, a discussion of spirituality and consciousness raising," he said. “Right now we need laws, because at the end of the day we all have to vote to end the control corporations have over our government.”

Simmons challenged the Tea Party movement to embrace a constitutional amendment to ban corporate money from politics. “It’s a concrete idea and I would think that the Tea Party members would like this amendment.”

After his remarks, he spent an hour touring the encampment, taking in the library tent, the media tent, the food tent, the pedal power tent, and the meditation tent, where he noted that he and his children meditate twice a day. Later Simmons said he planned to stand shoulder to shoulder with the protestors in their daily march through downtown Boston. The movement, he said, is “just getting started.”