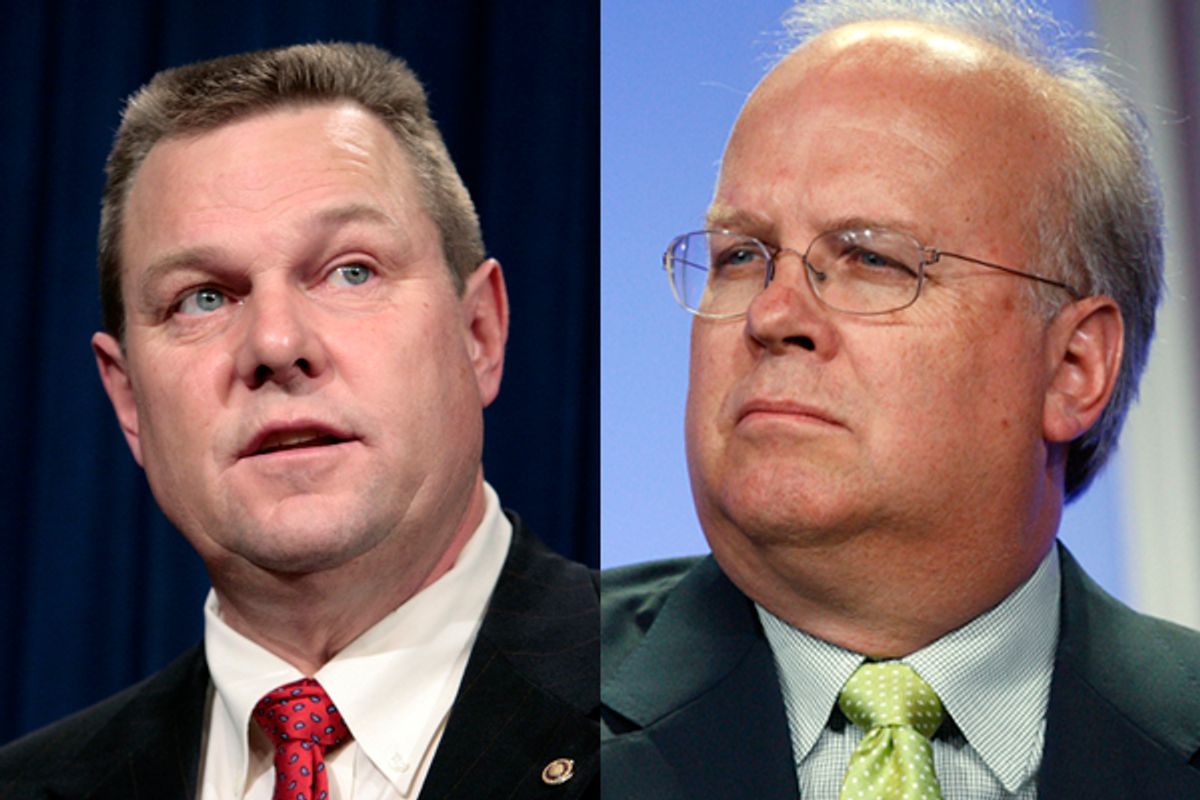 An ad by Karl Rove's Crossroads GPS attacking Montana Sen. Jon Tester was pulled from the air by a cable service because it contains nothing but very blatant and indefensible lies, unlike the usual defensible lies and distortions most political ads make.

Cablevision's Optimum cable pulled the ad, which claimed that Tester voted against banning the EPA from regulating farm dust. The supposed EPA rule was completely imaginary and the vote was about Chinese currency manipulation.

I bet Crossroads is super embarrassed about this awful mistake, right? Of course they are:

Nate Hodson of Crossroads said in defense of the pulled ad, "It was a very small cable system. The four largest broadcast stations in Montana reviewed the facts supporting the ad and will continue airing it."

He said later, "We are communicating with the cable system and expect that the ad will be back up and running on cable soon."

At least the ad pitting Bill Clinton against Obama while falsely claiming that Obama wants to raise everyone's taxes right now is based on deceptively edited quotes! This is just based on fantasy.

The dishonest Crossroads ad attacking Virginia Senate candidate Tim Kaine has a similarly weird blatant lie, claiming Virginia under Kaine ran a "big deficit," which is not the case. (Virginia slashed spending after the recession made revenues plummet, a move Republicans and deficit hawks everywhere support.)

But because Elizabeth Warren, running for Senate in Massachusetts, represents the greatest threat both to a sitting Republican senator and to the conservative economic message in general, Rove and Crossroads are sparing no expense smearing her. Warren took credit for inspiring the national conversation about economic injustice that led to the Occupy Wall Street protests. Or, in Crossroads' words, she "sides with extreme left-wing protests" while ... ignoring "jobs." Elizabeth Warren supported protesters doing drugs, even though millions of Americans are out of work! For shame.

Warren, unfazed, launched her campaign with an ad attacking Wall Street, because Americans seriously don't like Wall Street, but Crossroads spent $560,000 on the "radical redistribution of wealth" ad and plans to spend $150 million altogether defeating Warren.

Rove has, it seems, realized that you don't even need to base your attack ad on something that actually happened. You don't need to take something out of context. You can just make up whatever attack you want! Jon Tester voted for spending taxpayer dollars on Magnolia cupcakes for pedophiles. Elizabeth Warren was a member of the Organizing Committee for the Second Congress of the Russian Social Democratic Labour Party.

And the only checks on their lies are mealy-mouthed newspaper fact-checkers and, apparently, cable companies. Otherwise there are no serious downsides or risks to running anonymously funded hundred-million-dollar misinformation campaigns. There are no consequences, no fear of any sort of future professional repercussions for any of the people involved in producing and airing the ads, and really no compelling reason not to lie to destroy a couple of political opponents.

This should be something of a lesson to Democrats, too: You cannot prevent Rove and his allies from accusing you of being a wealth-redistributing tax-hiking Communist radical no matter how "centrist" or "moderate" your voting record, so you may as well vote to redistribute wealth, right?