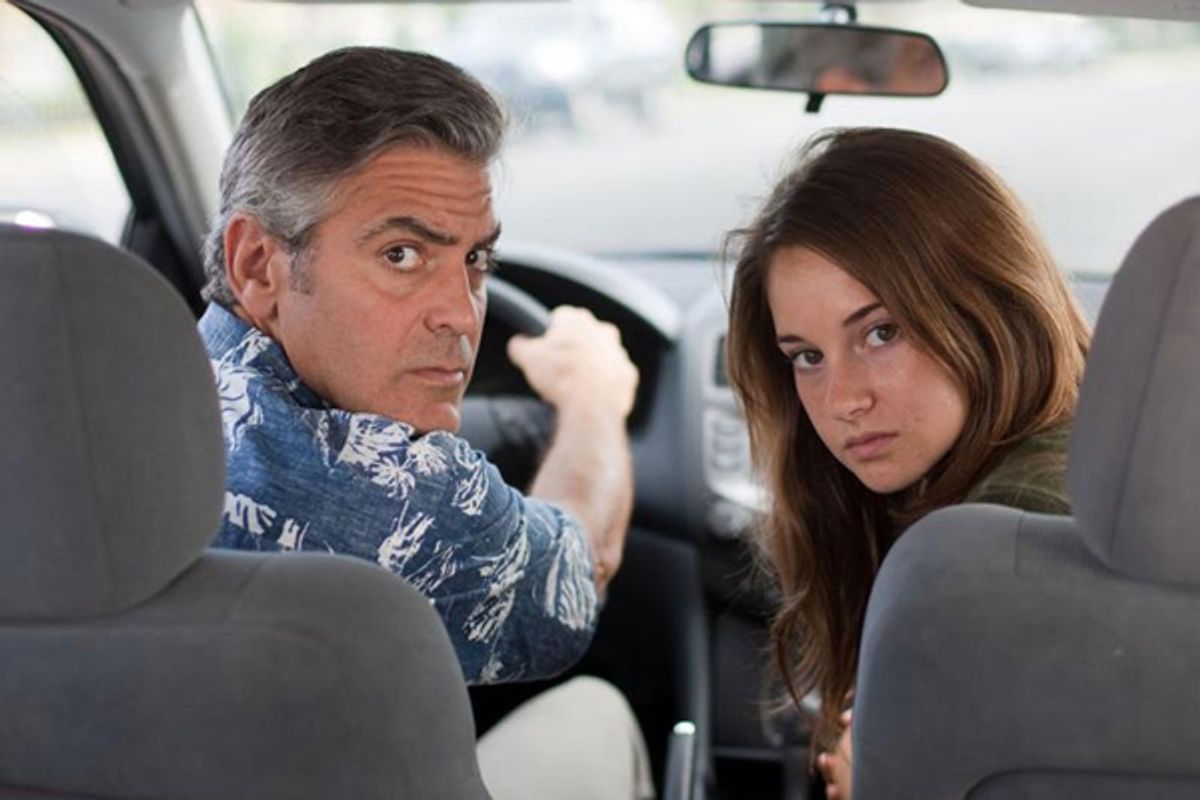 When I covered the premiere of Alexander Payne's bittersweet, Hawaiian-themed comedy-drama "The Descendants" at the Toronto International Film Festival, I largely dodged my own mixed emotions about the film. Instead, I wrote about the evident fact that it may well win George Clooney the leading-role Oscar that has so far eluded him. (Although he's twice been nominated for best actor, in "Michael Clayton" and "Up in the Air" -- and was also nominated for both screenplay and direction with "Good Night, and Good Luck" -- Clooney's only Academy Award so far has come in the supporting category, for "Syriana.") So it's time to come clean and say that "The Descendants" bugs me quite a bit, even as it successfully navigates humor and heartbreak, and ultimately packs a considerable emotional wallop. It's an unusual combination; if a movie can be subtle and clumsy at the same time, "The Descendants" is that movie.

Part of what's going on in "The Descendants" is that Payne and co-writers Nat Faxon and Jim Rash (adapting a novel by Kaui Hart Hemmings, who gets to play a small supporting role) are calling on a time-honored dramatic strategy that goes back to Renaissance comedies, if not earlier: Concealing serious themes beneath a pleasant surface and a genial manner. Cinematographer Phedon Papamichael (who also shot Clooney's "Ides of March") delivers spectacular images of Hawaiian scenery and luxurious upper-crust life in the American tropics. Always a director who refuses to be rushed -- either in making his films or in getting us through them -- Payne ambles his characters from one unbelievably gorgeous location to another, pushed along by the tradewinds and by the mellowed-out rhythms of a soundtrack that's likely to spark a mini-craze for Hawaiian slack-key guitar pop. And then there's Clooney's character, a bland, benign Honolulu lawyer named Matt King, who wears a Hawaiian shirt and rumpled chinos to work (yes, Aloha State readers, I know that's normal) and seems supremely unprepared for the family crisis that has enveloped him.

Matt explains the whole situation in a series of rambling, discursive voice-over monologues that open the film: His wife, Elizabeth (Patricia Hastie, who never utters a line), is in a coma following a boating accident. Matt, who has always been the "backup parent, the understudy," is alone with Scottie (Amara Miller), his ferociously angry 10-year-old daughter. In desperation, he summons his older daughter, the alienated teenage Alexandra (Shailene Woodley), from her boarding school on the Big Island of Hawaii. At the same time, Matt faces a huge decision about the immense land trust he manages for his extended family, 25,000 pristine acres on the island of Kauai that represents the last untouched inheritance of Hawaiian royalty. (Matt and his tribe are “haoles,” or Hawaiian-born whites, but are descended from the House of Kamehameha through a great-great-grandmother.) The time to sell out to a developer, and reap an enormous payoff that will make the whole family rich, seems to have come — but the final decision lies with Matt.

Laying out the whole story in such a patently literary, anti-dramatic fashion can only be deliberate. Matt doesn't simply tell us the facts in this introductory narration, but also tells us what he's feeling and thinking: "If you're trying to get my attention, Liz, it's working," he tells his wife, silent in her hospital bed. "I'm ready to change." When she gets better, he assures us (or her, or no one in particular), he'll buy her a house in France, travel around the world, and perhaps even talk about their relationship, which we gather has been on the skids for some time. On one hand, this layer of pounding obviousness on top of Clooney's subtle, measured tragicomic performance is completely unnecessary. On the other, I kind of get it: Payne is cashing in on Clooney's basic likability and on the level of trust we feel for him, and using this breezy narration to make a story about mortality, loss, betrayal and adultery go down as smooth as a beachfront Mai Tai at sunset.

I'm about to describe some important but early plot developments; I wouldn't call them spoilers, but if you feel an allergic response coming on, feel free to bail out. Before we get to that, a few more words about Clooney, who has unquestionably become a braver and more ambitious actor in middle age, and no longer seems concerned with nurturing his personal vanity or protecting his star image. Matt is an undemonstrative and uncharismatic guy with bad hair and a sub-J. Crew wardrobe, who at first seems far too modest a character to hold our attention. That's precisely the point. Clooney gets one big emotional scene, near the end of the film, that's likely to send viewers fishing for their hankies. But Papamichael's camera literally backs away from Matt's moments of crisis, and most of Clooney's delicate, wrenching performance here lies in subtle, almost invisible things, like the way he begins to look at other people differently and hold their gaze longer, as circumstances push him toward a more grown-up relationship with his family and the world.

I think Payne is arguing that the most melodramatic elements of the story, like the boating accident and the Kauai land-trust dilemma, are just the setup for Matt's real drama, which is internal. He has to face the truth about his marriage, first of all, and start all over again with Alex, a near-adult he barely knows who seems to view both him and Elizabeth with unmitigated disgust. (I've heard more than one cynical viewer observe that Payne has pulled off a neat trick: A romance between George Clooney and a teenage girl that isn't creepy.) If there's a second Oscar in this movie, it may well go to the 20-year-old Woodley, previously known for the TV series "The Secret Life of the American Teenager." Alex has her own difficult emotional journey to make, as she's thrust into the role of substitute mother to Scottie and her dad's only emotional ally.

Matt has suspected the truth all along, and he's about to get a heavily caffeinated double dose of it: Elizabeth isn't getting better, and their marriage might have been over even without the head injury. Considering that this is a movie about a dying woman who lies hideously gnarled in a hospital bed and the cuckolded husband who half-suspects he deserves it, much of "The Descendants" plays as lightweight comedy. (In fact, on second viewing I see "The Descendants" as the faux-casual, American-indie alternative to Lars von Trier's "Melancholia," which cloaks similar emotional material in art-house grandiosity and science-fiction parable.) Matt and his family bumble episodically from one island of the Hawaiian archipelago to another, encountering Robert Forster in a bracing performance as Elizabeth's righteously angry father, Beau Bridges as a boozy aging-hippie member of the King clan waiting for the money tap to turn on, Sid Krause providing comic relief as Alex's stoner boyfriend, and Matthew Lillard (shticky) and Judy Greer (wonderful) as a real-estate hustler and his adorable wife.

There aren’t any huge surprises -- or even too many small ones -- about where “The Descendants” is going. (If you’ve ever seen a movie or a play or an episode of a TV series, you don't even need to ask what decision Matt will make about those 25,000 unspoiled acres of paradise.) So how much you like it is largely a question of whether you enjoy getting there at Payne’s leisurely pace. There haven’t been many films set against the real-life culture of contemporary Hawaii (as opposed to touristy episodes shot on the beach), and Payne captures the slightly sleepy but fully modern atmosphere of the 50th state beautifully. Admittedly, the combination of great scenery, an interesting backdrop and two terrific acting performances easily goes far enough to make this movie a front-runner in the awards race. But I never got the feeling that I was experiencing something unexpected, or learning something new about the real world. There are quite a few better, braver and more ambitious films coming out this season, but this one has undeniable appeal and staying power. It's a witty, well-crafted adult entertainment that hits its beats right on time and won't insult your intelligence, with a great performance from one of Hollywood's most beloved stars.