The GOP and electoral suicide

A poll has Newt Gingrich leading the pack. Here's what the numbers don't show 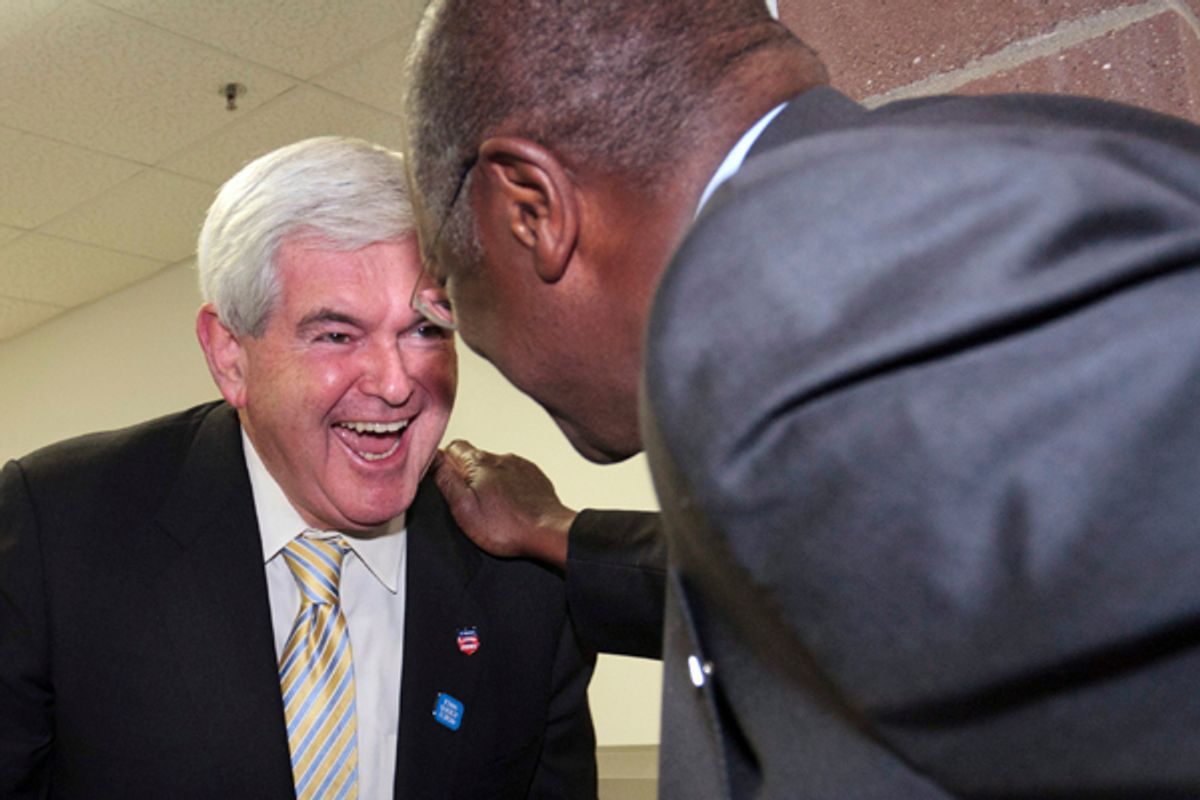 The most interesting thing about the first poll to show Newt Gingrich leading the national Republican horse race is how much room to grow it suggests he has.

The survey, released earlier this week by PPP, put the former House speaker at the top of the pack with 28 percent, an impressive enough mark for Newt. But it also showed Herman Cain gobbling up 25 percent -- a level of support that seems likely to plunge as his devastating Rick Perry moment sinks in with Republicans. In other words, the potential may exist for Gingrich's support to rise over 30 percent, maybe even higher, and and for him to open up a sizable lead over Mitt Romney, who many believe has the nomination in the bag.

Or maybe Newt will fall back to earth fast -- especially now that Bloomberg is reporting that he actually received between $1.6 million and $1.8 million from Freddie Mac. But even if Newt plummets, there's no reason to assume Romney will be the immediate beneficiary; more likely, someone else (maybe Cain again? maybe Perry? or Santorum?) will pick up the slack. This has been the pattern that has defined the GOP race all year.

As best I can tell, we're looking at an unprecedented situation here. Has a candidate ever been as widely touted as his party's inevitable nominee this close to the start of the primary/caucus season and still fared as poorly in polling as Romney?

The question is whether Romney's consistent failure to break the 25 percent mark -- even as several "fringe" candidates have managed to do so this year -- really means much. And the implications are significant, given that there's probably a steep drop-off between Romney and the rest of the GOP field when it comes to general election viability. If Republicans settle on Mitt, they'll probably maximize their chances of ousting Obama. But if they go with Newt, Cain or Rick Perry, they'll practically be begging the swing voters who might otherwise be inclined to fire Obama to think twice, hold their noses, and stick with the incumbent.

The case that Romney's struggles are overrated seems solid enough. His overall image with Republicans remains strong and polls show him doing well in one-on-one races against his GOP rivals, suggesting that as the race thins after the early contests Romney won't have much trouble consolidating support.

Plus, he's running a real campaign, with a competent national organization, a meaningful organizational footprint in all of the key states, and significant support from Republican elected officials and party leaders. Cain and Gingrich aren't doing this at all. And shouldn't we know better than to read into Newt's current surge? Absurd volatility and fleeting polling bursts by random candidates have been the rule of this cycle, so it's only a matter of time before Newt fades -- just as Donald Trump, Michele Bachmann, Perry and maybe now Cain all did. While Romney's numbers haven't been great, he's the only candidate who's shown real staying power. This all buttresses Jonathan Bernstein's argument that it's nonsense to believe that Romney has already reached his ceiling for support:

Yes, I know, for those of us who have been following the GOP race since midnight or so on election night 2008, it seems that Romney has been running forever and that anyone who isn't with him now has probably made an actual decision to oppose him. But that's just not true. Voters (as Newton-Small notes elsewhere) just aren't paying attention yet. Really. They don't see Romney as a guy who has been running forever; they see the whole thing as just a bunch of shuffling around well before the real election happens next year. They are in many ways wrong about the contest in general -- but not, of course, about their own perception of it.

But there's also something to be said for the idea that Romney is in more danger than most believe. He's polling much, much worse at this point in the campaign -- about seven weeks before Iowa -- than previous "inevitable" GOP candidates. George W. Bush was around 60 percent at this point in the 2000 cycle. Bob Dole was in the mid- to high 40s around this time in '96. So was George H.W. Bush in 1988 and Ronald Reagan in 1980. Nor did we see in those earlier cycles fad candidates rising in the early going like Cain and Gingrich have risen this year.

Plus, it's not like Romney hasn't gotten good press. His debate performances have consistently won favorable reviews, and in the wake of Perry's collapse earlier this fall Romney's supposed inevitability has emerged as one of the dominant themes in the media's coverage of the race. But it's all failed to lift him past 25 percent -- something that's all the more striking when you realize that Perry (who was briefly at 40 percent), Cain and Gingrich have all managed to break past that threshold.

All of this seems to bolster Ed Kilgore's argument that the emergence of the Tea Party movement, with its emphasis on "pure" outsiders, has "scrambled a lot of the conventional rules" and created a situation that might allow a candidate like Cain or Gingrich to win some early contests, gain momentum and walk off with the nomination.

Right now, Romney seems well-positioned to win New Hampshire, but he's bunched in what amounts to a four-way tie for first place in Iowa and he's running third in South Carolina -- with Gingrich in second and climbing fast. Romney could conceivably win all of those states, in which case he'd almost certainly grab the nomination. Winning two of them could be just as good. But what happens if he falls just short in Iowa and South Carolina, and then Florida too?

We've seen Republican primary voters shoot themselves in the feet before in the Tea Party-era. Just last year, conservatives insisted on nominating several unelectable candidates for high-profile statewide contests, and the GOP paid a price for it. Harry Reid, for instance, wouldn't be in the Senate today if Republicans hadn't picked Sharron Angle to oppose him. The common assumption has been that something like this just won't happen in a national GOP campaign -- the outcome just means too much to too many people in the party. And this view may still be valid, but the higher Gingrich climbs now, the more it prompts the question: Are we sure?