Where the electric car is going

Once doomed by automakers, EV's are flourishing in cities that plan ahead 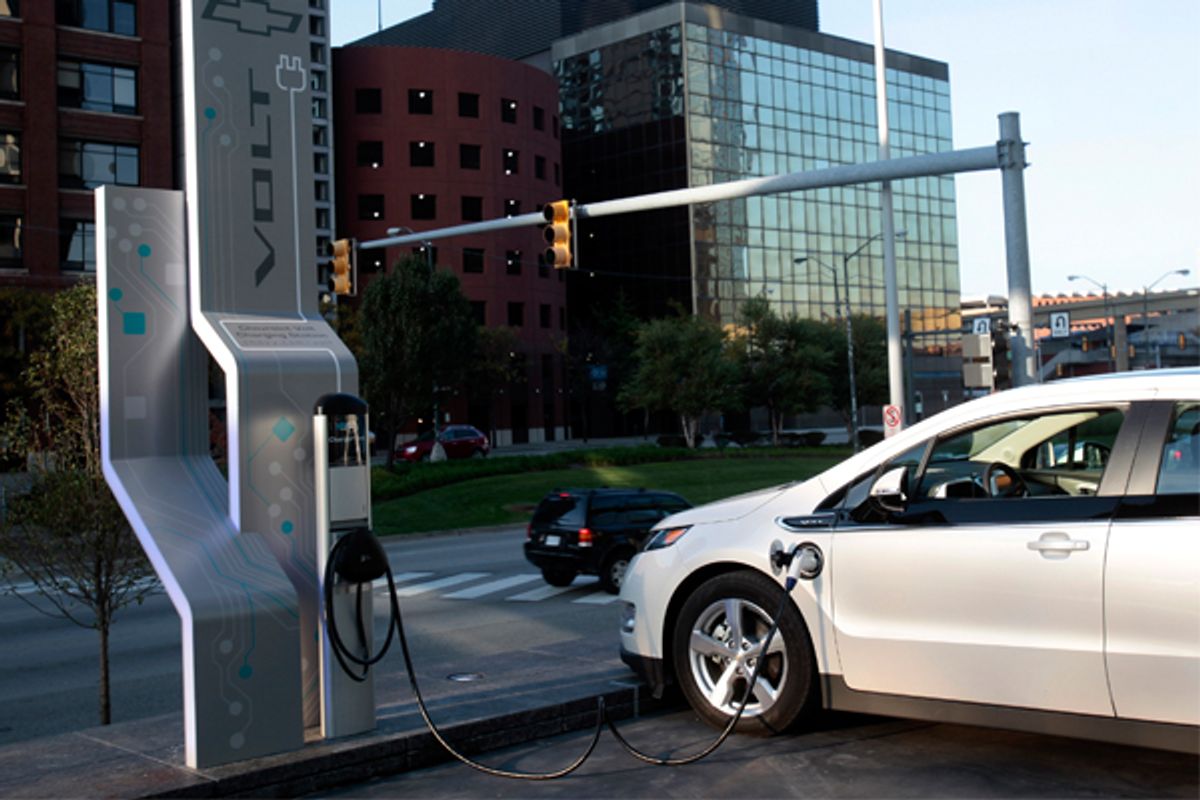 Chris Paine’s newest film, "Revenge of the Electric Car," is rolling out across the country with a buzz that seldom accompanies the release of a documentary.  That’s because Paine’s follow-up to 2006’s "Who Killed the Electric Car," which told the story of  GM’s recall of the EV1 electric car program in the 1990s, is something of a victory.

Watch the film’s trailer and it’s clear that Paine’s intention is just that: to tell the story of the forgotten underdog who has returned. Only, this time, we’re not talking about Rocky Balboa. We’re talking about a car.

It is, of course, more than a car. The electrification of the vehicle powertrain presents not only a new standard for mobility, but also how we think about energy in general. If widely adopted, electric vehicles could improve air quality, reduce dependence on oil, and spur domestic economic development.

Electric vehicles may not be “back with a vengeance,” as former GM Vice Chairman Bob Lutz proclaims in the movie. But they are trending, as they say. Since hitting the streets in December 2010, approximately 13,000 Nissan Leafs and Chevrolet Volts have been sold in the U.S. By comparison, Toyota sold only about 5,800 of its Prius hybrid -- a universally recognized symbol of environmentally conscious personal mobility -- to U.S. customers in 2000, the first year it was offered here. Earlier this year Toyota trumpeted selling its 1 millionth Prius in the United States, and has topped 100,000 U.S. sales per year since 2005. Prius now owns the lion’s share of the hybrid market.

Nonetheless, traditional hybrid cars account for only about 2.0 percent of 2011 sales in the U.S. through October. For electric vehicles to have their full impact, the adoption of this technology must leapfrog that figure.

“History tells us it took hybrid sales over six years to reach a mass market tipping point,” says Mark Perry, director of product planning for Nissan Americas. “We see customer demand reach the same level for electric vehicles in half the time.”

The advantage of an electric vehicle over another alternatively fueled vehicle, such as a hydrogen fuel cell or natural gas vehicle, is that the infrastructure necessary to power them is largely available. Drivers can plug their cars into their home, or in a charging station at their apartment complex, and leave for work with a fully “fueled” vehicle every morning. And for most trips, publicly available charging stations will not be vital.

The American Recovery and Reinvestment Act funded two electric vehicle projects: The EV Project and ChargePoint America. Early data from these programs show that the vehicle owners drive an average of about 30 miles a day. Four times out of five, the cars are charged at home. Cities and municipalities are studying the behavior of electric car owners to determine how much infrastructure is needed.

The ultimate success of the electric car depends on the convergence of a groundswell of customer demand with innovative government policies and processes that strip away existing barriers in the marketplace.

The installation of a home charging station, for example, does not have to be a complicated procedure, because the charging unit requires the same level of electrical service as a clothes dryer. Nevertheless, the process has proven to be a bottleneck in some municipalities, delaying drivers’ ability to plug in their cars. By cutting the time of the entire process to a maximum of 48 hours, Houston and Raleigh removed a key obstacle to electric car adoption.

The Rocky Mountain Institute’s Project Get Ready, where we work, is a network of more than 25 cities and states and 40 strategic partners, for exchanging lessons learned from on-the-ground electric vehicle readiness activities.  Portland, Ore., a Project Get Ready member city, recently opened Electric Avenue, a street demonstration of electric vehicle integration. The city government and local universities installed seven charging stations, educational kiosks and extensive branding for the manufacturers. As a result, the street has become a hub for electric car owners and a frequent location for promotional events.

The goal of these programs and other similar programs (such as Go Electric Drive, and Plug in America) is ensuring that the transition to electric vehicles is seamless. For the first time, major automakers have made a commitment to electric vehicles. Will America's car owners?

That depends a great deal on public perceptions -- some valid, some misinformed -- regarding the performance of these vehicles. Of all perceived limitations, the range of the pure electric vehicle is the most cited drawback of this technology. Although the vast majority of U.S. drivers travel less than 40 miles a day (a statistic mirrored by recent Nissan Leaf driver data), many car buyers want the option to drive across the country.  However, it should be stressed that plug-in hybrids currently available obviate this concern. Nevertheless, the perception holds, and car buyers don’t want to be told how they may drive.

A recent Chevy Volt fire recalls another frequently cited concern: safety. Several weeks after a crash test performed by the National Highway Traffic Safety Administration, a Volt caught fire in the testing site’s parking lot. Early reports indicate that the battery wasn’t drained following the test, just as gasoline tanks are emptied for traditional vehicles. With NHTSA now investigating this issue with all manufacturers of electric vehicles, more post-crash safety precautions, such as battery draining, may be required.

The automobile industry is moving into new territory with its production of mass-market electric vehicles. Yes, there have been previous forays into electrification, but never at this scale. J.D. Power and Associates forecasts that 1.8 million electric vehicles will be sold in the U.S. by 2020.

Hiccups are to be expected at this early stage of the innovation curve; however, too many could prove detrimental to the industry. Therefore, it’s important for all stakeholders -- cities, utilities, automakers and advocates alike -- to listen to the early adopters, as well as the skeptics, and for drivers to remain vocal about their tastes and experiences. Information is key to driving this industry forward.

Jay Tankersley is the program manager of Rocky Mountain Institute’s Project Get Ready.. Ben Holland is the project manager.

Jay Tankersley is the program manager of Rocky Mountain Institute’s Project Get Ready.. Ben Holland is the project manager.