Are pilot layovers full of intrigue?

"Pan Am" makes the life look like nonstop adventure. Plus: What's with Obama's "fishhook"? 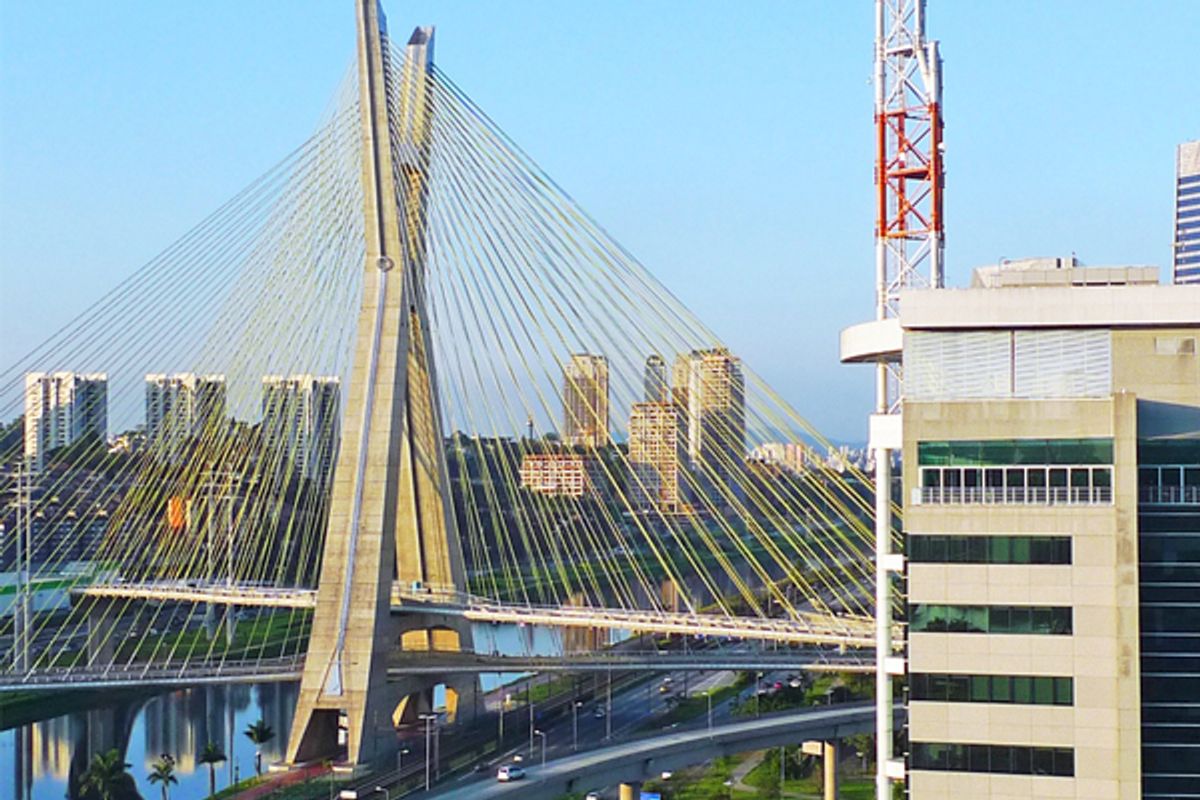 My wife and I enjoy the new prime-time soap "Pan Am," but we noticed that the crews on the show seems to have an awful lot of time on layovers to go sightseeing and get mixed up with affairs and intrigue in foreign capitals. I know that television takes some liberties with reality, but do airline crews really have much time during layovers in, say, Paris, Madrid, London and Berlin?

Sometimes, yes, though some airlines intentionally separate their crews, with pilots staying in one hotel and flight attendants in another.

On international routes the typical layover lasts between 24 and 48 hours. They can sometimes be shorter, but just as often they are longer, especially in the low season or in cities that don't have daily service. I've been fortunate enough to enjoy four or five days at a time in some pretty special places. My Flickr archives serve as a sort of layover photologue

Accommodations for international crews are usually four- or five-star properties in the heart of the city (Marriotts and Hyatts are my favorite, in case you're wondering). In the old days, captains were routinely given a suite. This still happens in some places. (Once, in Brussels, after an especially late arrival and with our normal rooms occupied, I was given a deluxe apartment with a six-person hot tub and eight-place dining table.)

So the dazzle of commercial flying isn't totally buffed away; you just need to know where to find it.

Domestically it's another story. Twenty-four-hour layovers in a downtown Hilton aren't uncommon, but neither are nine-hour rests at a motel next to the runway. These can be decent places, but they're the kind of fast food hotel you find everywhere; you've seen their office park contours and over-fertilized lawns all over the country: Fairfield, Courtyard, Hampton. I know these places well, mostly from my regional pilot days. My ballpoint pen collection is like a drive down I-95 or a loop around O'Hare, and I possess an unsettling ability to tell a Holiday Inn Express from a La Quinta blindfolded, by the smell of the lobby.

Rest and recovery, not local attractions, are the focus when time is short. Thus, in the minds of pilots and flight attendants, some destinations are perceived not as cities at all, but as rooms, beds and amenities. "Where are you off to?" a colleague might ask.

As my photos might attest (and videos, too, here, here and here), I'm known to be adventurous on layovers. Most crew members, for better or worse, are not. I've seen many a colleague spend the better part of a week in an exotic city without so much as stepping beyond the hotel perimeter, perfectly content to spend the entire time reclining by the pool.

Recently, waiting to board a long-haul flight, I witnessed the entire crew -- three pilots and a dozen or so flight attendants -- huddled together in a quiet part of the departure lounge. It appeared that the captain was conducting some sort of speech or briefing. What do you suppose was going on?

Most airlines require a crew briefing, convened by the captain, prior to every flight.

Domestically these meetings are pretty quick and casual; often it's nothing more than the captain calling aside the lead flight attendant and going over the flight time and whether to expect any turbulence.

On international flights it's more elaborate, and typically the entire crew is present. At some carriers -- mainly those outside the United States -- this meeting takes place in a designated briefing room before heading to the aircraft. At U.S. carriers it most often happens on the plane prior to boarding -- or, as you witnessed, in the gate area or some other spot that's convenient.

It starts with an exchange of names. The captain will introduce the cockpit crew to the purser and cabin attendants, who do the same in return. The captain then speaks for three or four minutes. Bullet points include the flight time, anticipated turbulence, in-flight security protocols, arrival weather, layover information, and anything else pertinent or peculiar to the trip. On long-haul assignments crews are sometimes together for a week or more. Aside from the practical aspects, the briefing is, if nothing else, an introduction to the people you'll be spending the next several days with.

How long does it usually take commercial airline pilots to prepare for a flight, and what goes into that prep? How far in advance does the pilot arrive at the airport?

At my airline, sign-in time for international flights is 90 minutes before departure. Domestically it's 60 minutes prior.

Maybe that sounds like plenty of time, but sometimes it's barely enough, especially for international. We start in the crew lounge, gathering up the paperwork and reviewing the intended routing and weather. On transoceanic flights the route needs to be physically drawn on a chart. Once at the plane, your gear needs to be stowed and assembled; flight attendants need to be briefed; the interior and exterior inspections need to be completed; there are pre-flight checklists to run; cockpit systems to check; the logbook has to be reviewed; and all of the route, wind and performance data need to be loaded into the plane's flight management system. And most important of all: going over the menu and deciding which entree you want for dinner.

Airline pilots do not file flight plans, or plan the flight for that matter. This is taken care of by the licensed dispatchers and planners at the carrier's operations center. When we show up in, say, Madrid, for a flight back to the U.S., there is a big fat folder of paperwork waiting for us. It'll be at the podium, or sometimes the station agents will place it inside the cockpit. It contains all of the flight planning data, all necessary weather charts and forecasts, NOTAM summaries (don't ask) and a slew of supplemental information. Everything that needs to be filed or requested, from the flight plan itself to foreign over-flight permissions, is already taken care of.

Domestically the paperwork packet is a lot smaller, but it's handled the same way. The gate agent will run everything off the podium printer and hand it to the captain or first officer.

Once airborne, any amendments and updates are uplinked to the crew via radio datalink. There's a printer in every cockpit.

And maybe you're wondering: What is a "flight plan," anyway? Officially it's a document listing the essentials of a flight: aircraft type and registration, fuel on board, the requested routing and altitudes, flying time, etc., filed with air traffic control (that is, the FAA and/or whichever foreign agency or agencies need to be dealt with prior to departure). The crew never sees this document or, in most cases, even a copy of it. What we do see and carry with us, however, is a comprehensive printout, often as many as 10 pages long, containing not only this basic information, but a highly detailed, waypoint-by-waypoint breakdown of the entire flight, start to finish, including everything from anticipated fuel burn figures to wind and temperature analyses to aircraft performance data. We call it “the flight plan.” Technically it’s not, but in practice it is.

Some of the paperwork is laser-printed on standard-size office paper, but most of it comes rolling off in splendorous dot-matrix. This might seem a little backward, but it's practical too, having things together, at least initially, on a single continuous sheet.

Now, allow me to introduce a new feature to Ask the Pilot. It's called Diversions. Like the Go-arounds feature, which I employ to address previously discussed topics, it borrows a common aviation term -- except this time to describe a total non sequitur that has nothing to do with airplanes or air travel.

Have you ever seen footage of Barack Obama (POTUS) signing a document?

Watch closely. When he writes, his left arm is twisted up like it was caught in a bear trap or something -- all crooked and curled and hooked. The first time I saw this I thought he'd suffered some terrible accident or birth defect.

What happened is, he's left-handed. Apparently at a young age, POTUS was taught that the "correct" method of longhand is with a right-handed, left-to-right slant. For a southpaw to affect this slant, he or she needs to bend the wrist around like a fishhook. Try it.

I am told this was a big thing back when they actually taught penmanship in schools. It was sort of like having your feet bound; teachers would bend and twist the errant wrists of youngsters until they learned to slant their words in the proper fashion. (It also allows the lefty to have a clearer view of what he or she is writing, and reduces smudging.)

I had noticed Obama's fishhook before, but I never understood it. Now I know the truth. He can blame the public schools in Nairobi or Riyadh or wherever POTUS went to grade school, according to my father.

Meanwhile there used to be this guy, Bill, who ran the Americar Auto Rental place up on Highland Avenue here in Somerville, Mass. As the only airline pilot in the world who doesn't have a car, I would rent from Bill two or three times each year.

Whenever I'd walk in, Bill would be sitting there at his desk, writing, with his left arm hooked around in this painful, hideous fashion, just like POTUS.

I always felt terrible for Bill. I honestly believed that he had a deformity. But the joke was on me. Bill's hand was just fine. Although he was never elected president, he was one of those lefties forced to write as if he was right-handed.

It's all clear to me now.

I would explain all of this to Bill, maybe, except that the Americar Auto Rental place on Highland Avenue closed down several months ago.