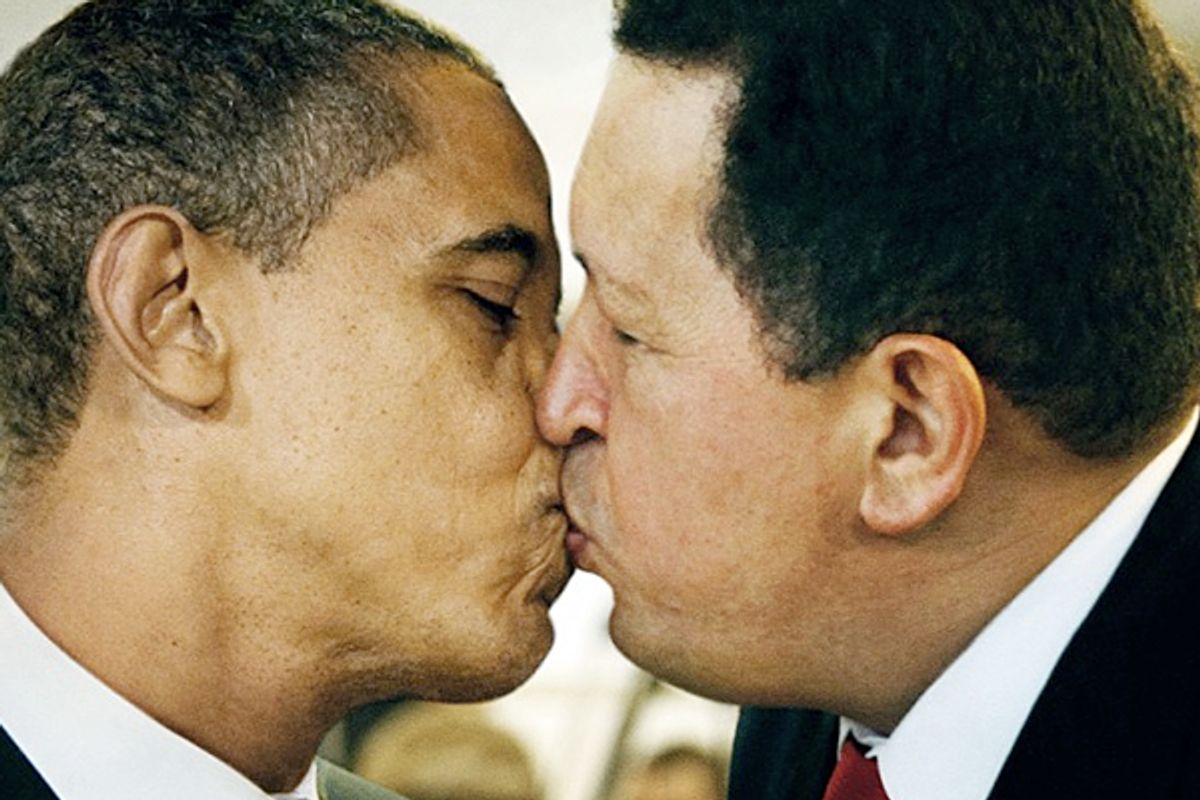 Just in case the returns of Beavis and Butt-Head, the Red Hot Chili Peppers and Teen Nick haven't convinced you that the '90s have returned, Benetton has just unleashed a button-pushing new ad campaign. I swear to God, if new jack swing comes back, there is going to be hell to pay.

On Wednesday, the always-provocative brand unveiled its new "Unhate" Foundation with Photoshopped  world leaders engaged in unlikely lip locks. In the name of its message of global tolerance and promoting "human rights and the fight against poverty," the company has imagined kisses between Barack Obama and Hugo Chavez, Benjamin Netanyahu and Mahmoud Abbas, and Kim Jong Il and Lee Myung-bak. But when the Italian clothier unveiled an image of Pope Benedict XVI macking on the head of Cairo's Al-Azhar Institute Sheik Ahmed el-Tayeb, Benetton found itself yet again right where it's always been happiest – in hot water.

You can see why either the Vatican or Al-Azhar, two institutions not traditionally famed for their cheeky senses of humor, might take umbrage. In January, Al-Azhar broke off interfaith dialogue with the Vatican after Benedict called for greater protection of Christian minorities in the Middle East. On Wednesday Vatican spokesman Father Federico Lombardi called the image "a grave lack of respect for the Pope, an offense against the sentiments of the faithful and a clear example of how advertising can violate elementary rules of respect for people in order to attract attention through provocation." The Vatican also threatened to "take the proper legal measures" against Benetton, leading the company to a very hasty retreat. Benetton swiftly began working to withdraw the papal ad, saying in a statement that while the image was intended "exclusively to fight the culture of hate in every form," they are nonetheless "sorry that the use of an image of the pontiff and the imam should have offended the sensibilities of the faithful in this way."

It's been a long time since Benetton got anybody's hackles so far up. Back in the day, the company was as famed for its politically provocative ads as it was for its brightly colored sweaters. Frequently, under the direction of photographer Oliviero Toscani, the company mixed shock and corduroy-peddling with lightning-rod images. There was the simple, visceral photo of three identical-looking hearts, emblazoned with the words "White. Black. Yellow." There were the bloody, bullet-riddled fatigues of a soldier killed in Bosnia. A bare-chested black woman suckling a white baby. A priest kissing a nun. And perhaps most famously, Therese Frare's award-winning photo of AIDS-ravaged activist David Kirby on his deathbed. Benetton's Colors magazine pushed the envelope even further, giving us everything form Tibor Kalman's imagining of Queen Elizabeth as a black woman to visually arresting issues on such touchy subjects as death, race, prison and slavery.

The connection between ponchos and politics is not always a clear one. And there's certainly more than a hint of very deliberate outrage flaunting in Benetton's newly revved up interest in getting the attention of the pope himself. But through its advocacy, its "creativity lab" Fabrica, its relentless insistence that its consumers pay attention to AIDS and war when they're just trying to read a Glamour or GQ magazine for some fall fashion ideas, and its simple, tireless message to "unhate," the company has earned its credentials as doing more than just using shock in the name of tasteful Italian jeans. It depicts the horrors of violence and disease, but it still imagines a world in which leaders at polar ends of the spectrum can embrace in love. Exploitative? A little bit bratty? Sure. But an idea that's still warmer and more welcome than a puffer coat on a cold day.