Could Newt reprise the stunt that made him famous?

If Republicans in Congress give even an inch on tax hikes in the next week, the timing will be perfect for Newt 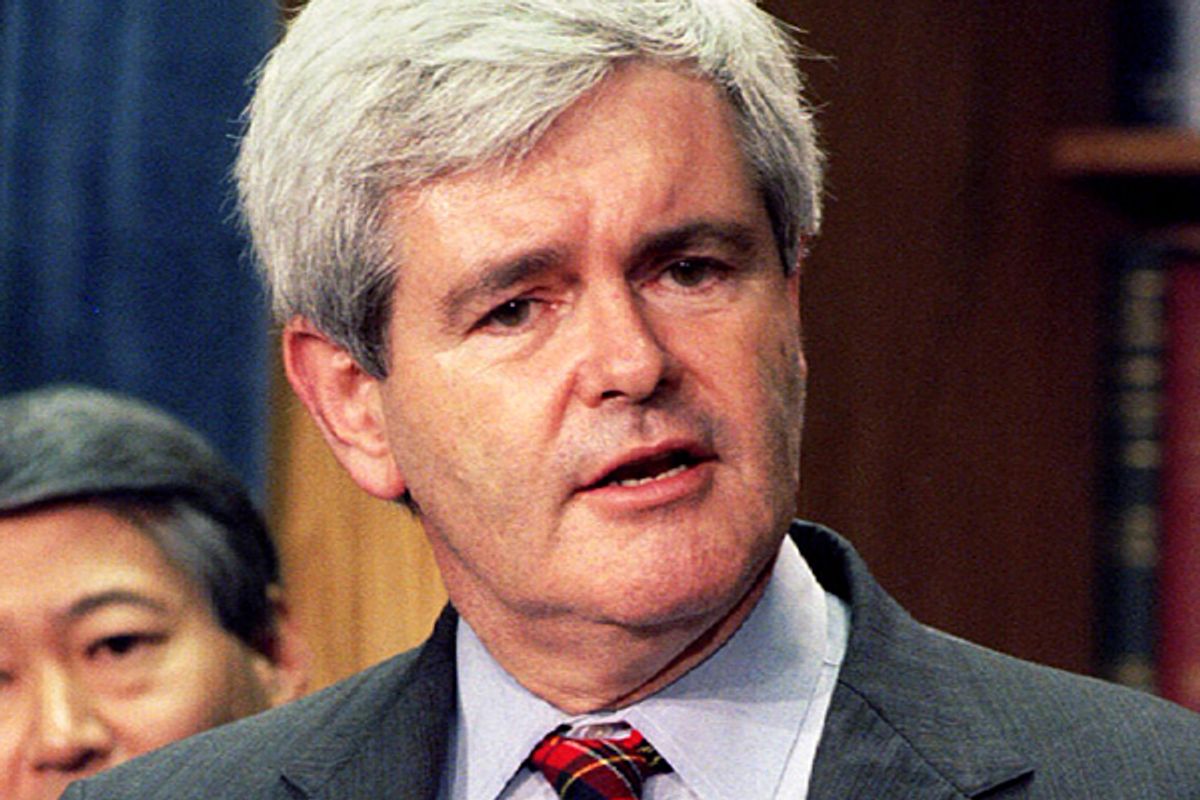 Newt Gingrich made a name for himself on Capitol Hill in the 1980s as the leader of a band of younger, more aggressively ideological Republican House members. In the early days of C-Span, he and his compatriots were the first to recognize the potential of using Special Order speeches -- remarks delivered in an empty House chamber after the day's business was concluded -- to reach conservative activists across the country. The content was heavy on raw and often vicious partisanship. An enraged Tip O'Neill branded one particularly nasty Gingrich attack on several Democratic congressmen in 1984 "the lowest thing that I have ever seen in my 32 years in Congress."

But the moment that really made Gingrich's reputation with national conservatives came in the fall of 1990, when he turned on a budget deal that President George H.W. Bush struck with both parties' congressional leadership. The plan called for a mix of tax hikes and spending cuts to arrest the exploding deficits that the Reagan era had produced. It also marked Bush's formal departure from the "Read my lips" anti-tax pledge he'd made in his 1988 campaign.

Gingrich, then the House minority whip, declared the package an economy-wrecking sellout of conservative principles and rallied enough GOP opposition to hand the White House a humiliating defeat when the bill came up for a vote in early October. After a few frantic weeks, a compromise version was finally enacted (with Newt still objecting), but the entire episode was a clear political victory for the ambitious Georgian. Within a few years, he nudged the long-serving House GOP leader, Illinois' Bob Michel, into retirement and then rode the 1994 midterm wave to the speakership.

This background may be worth keeping in mind now, with reports suggesting that a somewhat similar schism among congressional Republicans is emerging over taxes. At issue is the sudden openness of even some stalwart anti-tax conservatives to a supercommittee deficit reduction deal that would include about $300 billion in new revenue. It's a significant development when you consider how off-limits within the GOP the idea of any revenue increase under any circumstance has been since the '90 debacle. It's also, from a policy standpoint, easy to make too much of this: As Jonathan Chait explained, the modest revenue hike some Republicans are talking about would be tied to the extension of the Bush tax cuts (which are due to expire at the end of next year) and a significant reduction in the top individual rate. In other words, we're not really seeing a philosophical shift on the right here -- it's more a pragmatic response to the fact that the expiration of the Bush tax cuts gives the Democrats leverage.

But in politics, there's often a difference between what things actually are and how they are perceived. And the reality is that in today's Republican Party, there would be a clear incentive for talk show hosts, commentators and ambitious politicians to appeal to their base's desire for purity and suspicion of the GOP's Washington leadership by savaging any supercommittee deal that includes new revenues. It could, in other words, provide the perfect opening for Gingrich to reprise his 1990 theatrics and to present himself as the voice of conservative true believers who are outraged at such a betrayal of principle.

Granted, he'd have plenty of competition among his fellow candidates. Michele Bachmann and Rick Perry and Herman Cain would all surely lash out at any deal too. But it's Gingrich's moment right now, and not theirs -- and he knows exactly how to exploit these sorts of situations. There's no way that Mitt Romney, who is trying to balance general election imperatives with primary season survival, would be able or willing to match him in the red meat department.

It's very possible that there won't end up being any supercommittee deal. The two sides are still very far apart, and the Nov. 23 deadline is now less than a week away. But if there is one and it includes new revenues, it figures to provide Gingrich with the perfect issue at the perfect moment.