The students are coming! 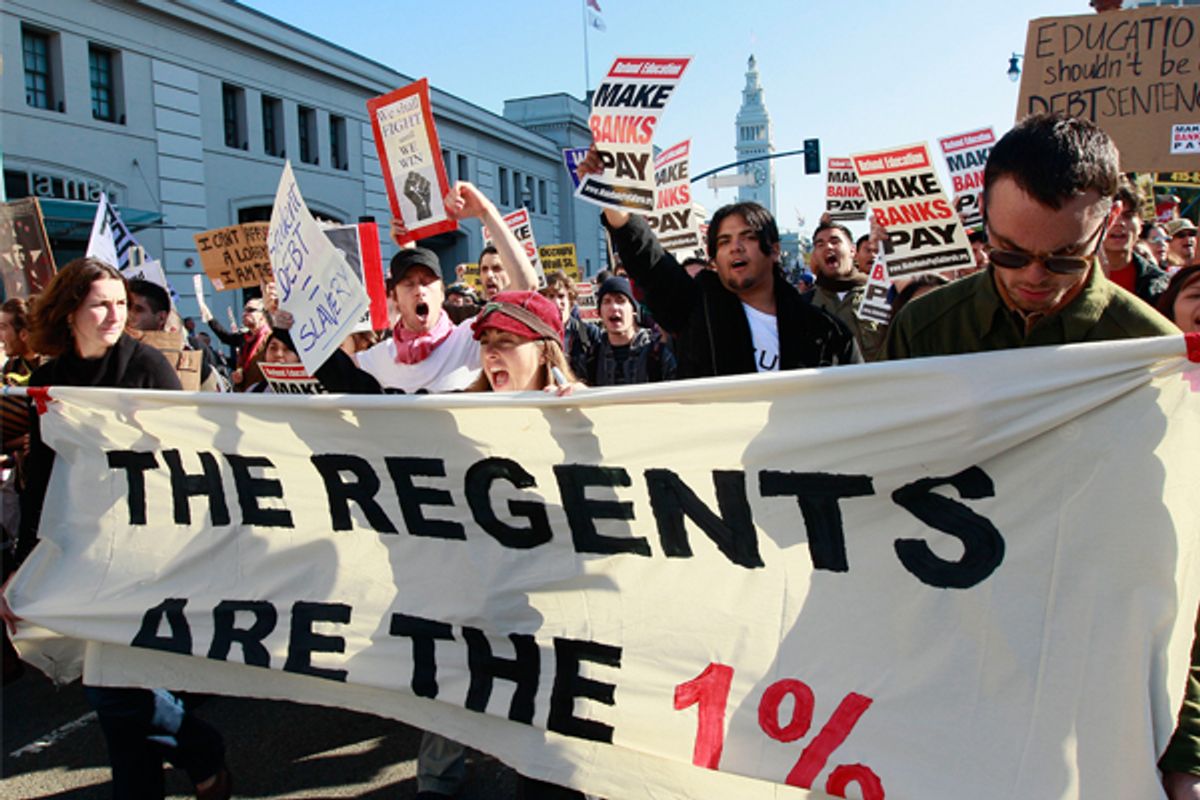 Students and Occupy San Francisco protesters march along the Embarcadero as part of a demonstration in San Francisco on Wednesday. (AP/Jeff Chiu)
--

From the Free Speech Movement to SDS and the anti-Vietnam War protests, many of the most important American protest movements have historically been spearheaded by students. In recent years, students, buffeted by hard times and growing up in an apathetic, me-first civic culture, have been as passive as the rest of the population. But in the last two years soaring tuition costs, draconian cuts in faculty and classes, and the prospect of a jobless, student-loan-burdened future, have begun galvanizing some collegians into action. And the Occupy Wall Street movement has lit a fire under more of them, and broadened their movement into a structural demand for social justice and equity.

On Wednesday, 500 to a thousand college students from all over California converged at Justin Herman Plaza, the center of the Occupy SF movement, and marched through the financial district along with their non-student brethren. For a weary movement, it felt a little like a very young, very smart cavalry had come riding to the rescue.

“We’re part of a contingent from U.C. Berkeley and multiple campuses,” said John Stehlin, 29, a graduate student in geography at U.C. Berkeley. The U.C. students had been inspired by a fiery speech in Sproul Plaza given Tuesday by Robert Reich, the former U.S. secretary of labor who represents the progressive road not taken by Obama.

“We had planned to protest the Board of Regents meeting today," Stehlin went on. "but they canceled it for spurious reasons, claiming ‘rogue elements’ were going to commit violent acts. To me, it’s an attempt to avoid confrontation and silence our protests. So we decided to go ahead with our march anyway. Our point is that higher education is a right. It’s a social good. But the Board of Regents have been running higher education as a business. They go to Sacramento hat in hand asking for money for education, but they’re part of the system."

Stehlin see the regents as captive of a corporate mentality.

"We’ve never had one regent try to close the corporate loopholes in Prop. 13," he said, referring to the 1978 anti-property tax initiative that was largely responsible for the decline of California’s public education system. "They are the 1 percent. Some of them make money off their corporate affiliations, like Richard Blum. I’m not saying they’re a malicious cabal. But this is another way that something that is ostensibly public is being leveraged for private gains.”

Stehlin pointed me to a sign with a list of student demands, including closing the Proposition 13 loopholes, increasing taxes on the wealthiest, increasing federal sales tax on Wall Street transactions, reducing underwater debt to Wall Street to improve the economy and reversing tuition increases, layoffs and cuts to public education and essential services.

Sabine Gueltzow, 28, was another Cal student, a junior majoring in psychology. She was from East Germany, had a green card, and her tuition was paid for by a special Blue and Gold scholarship, but “I have to go to work to support myself; I’m barely scraping by,” she said.

Gueltzow said she had come out because she was concerned about the inequities in American society and the flawed priorities of the Board of Regents. “I come from East Germany, which at least tried to ensure more social equality,” she said. “Obviously it was deeply flawed in the execution. But the idea was right. I work as a nanny, and I know people who had a baby three years ago that they’re still paying for. I don’t think it’s right that someone has cancer and loses his job and can’t get health insurance because he has a pre-existing condition.”

As for the regents, “They’re in a difficult position,” Gueltzow said. “The state government cut the budget, and even if you cut all their salaries it wouldn’t make any difference. And I think they should have a background in business. But they shouldn’t be a CEO of a company making billions of dollars. They should be working more for the students than for Bank of America. They need to work with us on the way the budget is allocated."

“Ultimately, we’re the future," she went on. "This country is not going to run if we don’t get quality higher education. If people aren’t educated, the gap will get even worse. We’re not here just for us, we’re here for those who come after us.”

At once inspired and humiliated by having my country’s flaws accurately criticized by someone from East Germany, I found an older woman holding a sign.

Kathryn Johnson was an administrator and policy analyst who worked at San Francisco State. “I’m a veteran of the '60s – I had to come out,” she said. “I’m so happy to see some resistance.” Johnson said she had been at S.F. State for 16 years. “We have a mission of social justice. And our ability to have access and do outreach is being destroyed. Overcrowded classes, cutbacks -- our original mandate is being undermined. I know there’s money, if we close the corporate loopholes. It’s a matter of political priorities.”

Johnson’s husband, Anatole Anton, 72, was an emeritus professor of philosophy at S.F. State. “I was involved in the creation of the ethnic studies department. Now, all of the 1960s departments are being cut. Environment, women’s studies, sexuality – they’re all being cut.”

But if he was dismayed at the slashing of programs he helped establish, Anton beamed when asked about the Occupy movement. “I find it a breath of fresh air,” he said. “You hear so much about the Tea Party movement, and their issues are so narrow. This is about deeper issues. It’s been a long time coming.”

Signs in the ethnically diverse crowd ranged from “Refund Education: Make the Banks Pay” to “TAs for Ethnic Studies” to “Regents: You Can Run But You Can’t Hide” to “Rogue Element” to the Situationist “We are here to occupy your [heart sign]” to “Instead of coming to destroy we come to rescue the common welfare!” A huge banner proclaimed “The Regents are the 1%.”

Before the march began, the crowd -- mostly from the U.C. system, with lesser numbers from the state and city colleges -- was exhorted by a lineup of speakers that included several professors. Bob Samuels, a professor at UCLA, said that the country could pay for free universal public education if it wanted to. Wars in Afghanistan and Iraq have cost $150 billion, enough to pay for five years of public education across the U.S., he said.

Bob Meister, a professor of social science at U.C. Santa Cruz, opened his speech by saying he was accustomed to attending meetings of the Board of Regents. “You drove them away!” he said to roars from the crowd. “I would much rather spend my day with you.” Meister went into a detailed indictment of how the crisis of higher education was “not merely a response to budget cuts.” Deriding the meetings between the regents and the state as “a Punch-and-Judy show,” he said that the state and regents had a long-term plan to expand “that was not a plan to maintain academic quality.” Driven by promises that they would be part of a 20 percent that would prosper in a declining economy, students borrowed at a rate above that of the non-student population, resulting in a “tuition price bubble.” Today, Meister pointed out, even that bargain had collapsed: “The 20 percent are not getting ahead. The 1 percent are getting ahead.”

The most bomb-throwing speech, however, was made by U.C. geography professor Gray Brechin, author of “Imperial San Francisco,” a bestselling critique of the city’s roots in mining and its associated power interests. Brechin launched into a blistering attack on both regent Richard Blum and the San Francisco Chronicle, claiming that the local paper refused to run stories about his alleged conflicts of interest because he and his wife, Sen. Dianne Feinstein, were too powerful. “The mass media are there to keep you entertained,” he said scornfully, urging the students to keep “asking real questions.”

The crowd then headed out the Embarcadero, scene of some of the most violent and decisive labor struggles in American history, before turning east on Broadway. Then one of the more intriguing -- and funny -- tactics of the young movement unfolded. When they reached Battery Street, they all sat down in front of a business owned by regent George Marcus, chairman of the Marcus and Millichap Co., a national real estate brokerage, investment and development firm, and began chanting protests.

After a few minutes they got up, walked to Montgomery and Pacific -- on the edge of a historic district now filled with high-end antique stores, but where the raunchy International Settlement once trafficked in B-girls and bad booze -- and did the same thing, protesting another regent’s involvement in big business. Using the now-famous “human microphone,” someone began shouting something that ended in “largest equity firm.” The phrase “largest equity firm,” amplified by a thousand voices, floated down the street in disembodied mockery as bemused office workers looked down from the roofs. It was like a modern form of Puritan shunning and shaming in the heart of the old Barbary Coast.

“No buts, no fees! Education must be free!” the crowd chanted before heading down through the Financial District. There many of them barged into a Bank of America building at California and Davis (where regent Monica Lozano is on the board), stood on desks and chairs and chanted slogans like “Banks got bailed out, we got sold out!” Many soon left, but about 75 remained, as police prepared to arrest them. The crowd moved on and ended up, its numbers diminished, at the State Building.

It remains to be seen whether students will remain engaged in the larger Occupy movement. But at least on Wednesday, it felt like reinforcements from a long-disbanded regiment had suddenly arrived.