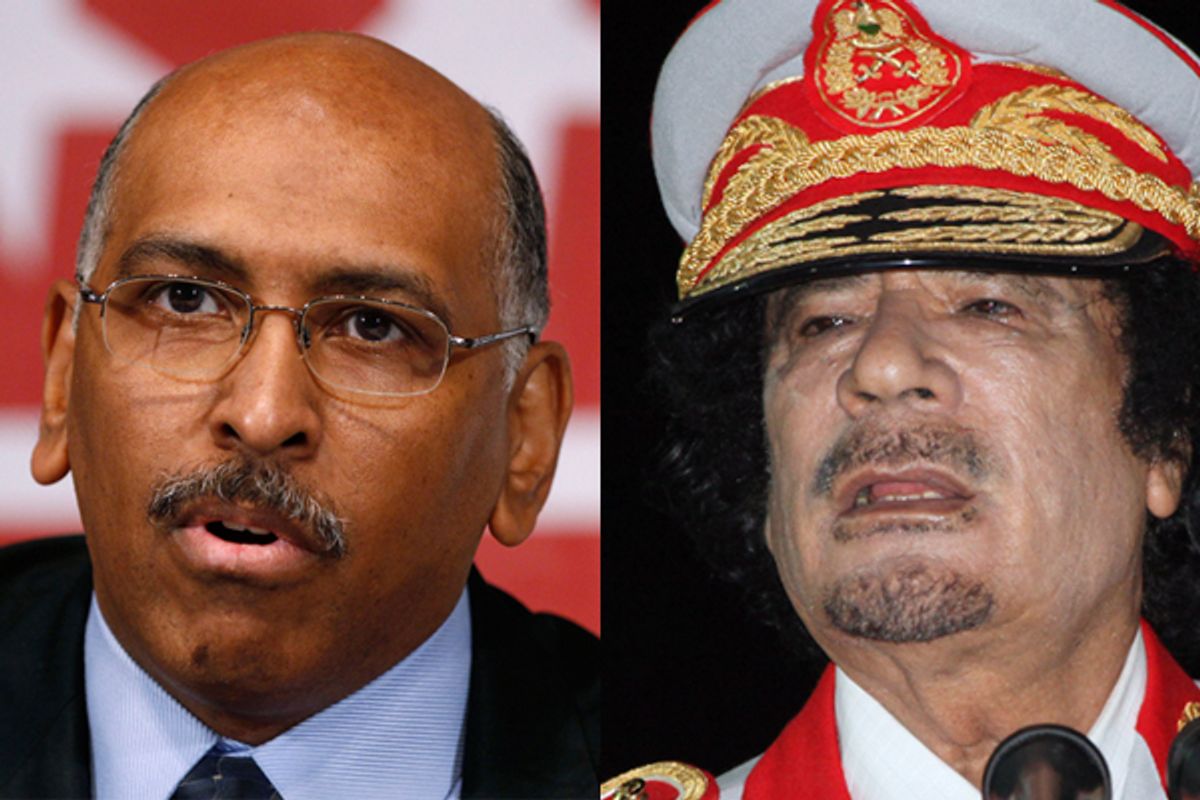 The New York Times has a must-read story today about a motley group of American political operatives who tried to get a $10 million consulting contract with Moammar Gadhafi earlier this year. Depending on who you ask, the plan was to either help Gadhafi cling to power, or to find him refuge in a friendly Arab country.

It turns out one of the operatives reportedly involved in the failed scheme has a history of getting caught up in scandals, and his hiring by the Republican National Committee last year helped discredit then-chairman Michael Steele.

To a colorful group of Americans — the Washington terrorism expert, the veteran C.I.A. officer, the Republican operative, the Kansas City lawyer — the Libyan gambit last March looked like a rare business opportunity.

Even as NATO bombed Libya, the Americans offered to make Col. Muammar el-Qaddafi their client — and charge him a hefty consulting fee. Their price: a $10 million retainer before beginning negotiations with Colonel Qaddafi’s representatives.

The other American partners were Neil S. Alpert, who had worked for the Republican National Committee and the pro-Israel lobbying group the American Israel Public Affairs Committee, and Randell K. Wood, a Kansas City, Mo., lawyer who has represented Libyan officials and organizations since the 1980s.

If the name Neil Alpert sounds vaguely familiar, it's because he played a role in the string of RNC scandals and embarrassments that led to the downfall of (now MSNBC analyst) Michael Steele last year.

With the RNC already facing allegations of gross mismanagement, Steele hired Alpert as a "special assistant for finance," Politics Daily reported in April 2010.

This was problematic because just a few years before, Alpert had been ousted as the chair of the D.C. Baseball PAC after he was caught using the group's bank accounts as his "personal piggy bank." The political action committee's mission was to bring Major League baseball back to Washington.

As I reported at the time, Alpert used the PAC's debit card at gas stations, a cheesecake restaurant, Chick-Fil-A, and a Washington nightclub called LOVE. Alpert denied wrongdoing in the case, but Washington's Office of Campaign Finance slapped him with a fine. Read the details of that saga here.