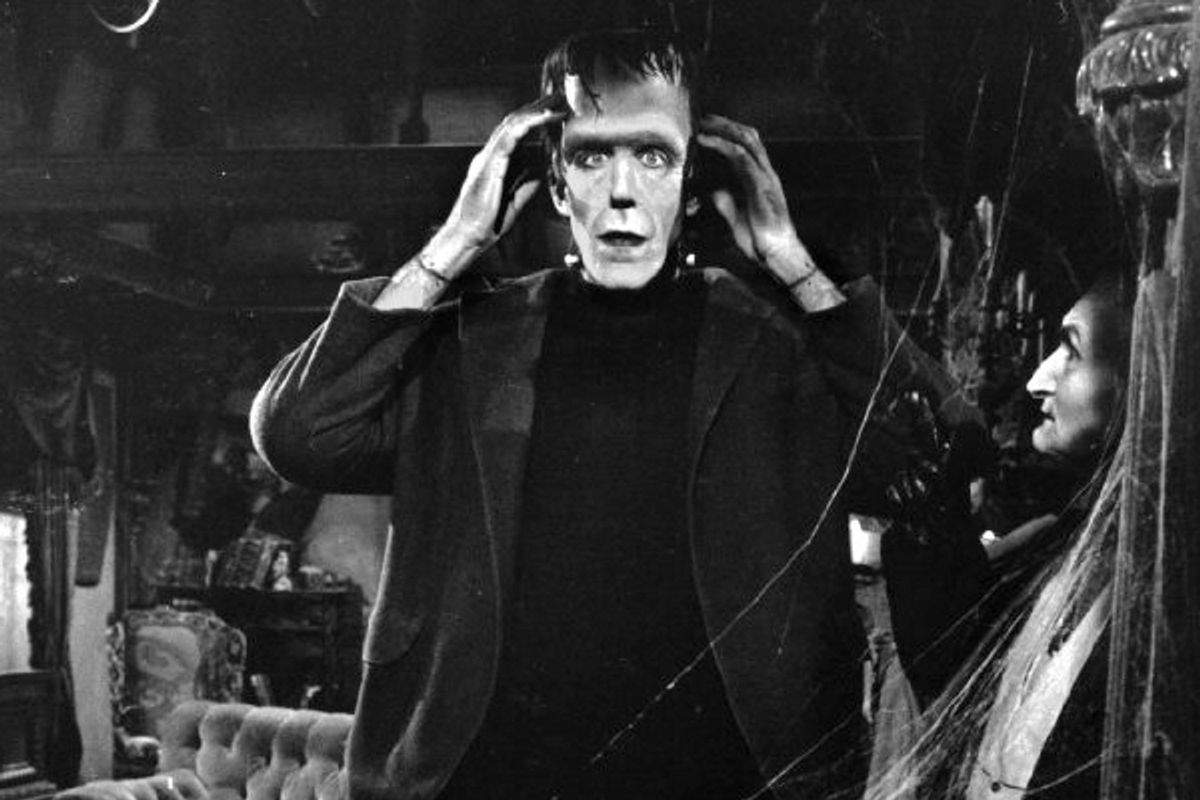 Should you have ever believed that there couldn't possibly be any more entertainment barrel yet to be scraped, remember this: NBC has just approved a pilot for a remake of "The Munsters." Yes, the sitcom about a wacky monster family, a show that has been off the air since 1966, is returning at last. Naturally, this new version will "have a darker and less campy feel" than the Vietnam War-era original. Well, that makes it sound awesome. And NBC is the network that put "Community" on ice while giving "Whitney" a pickup -- so I, the viewer, trust its taste implicitly!

It might be a hopeful sign that the show will be overseen by Bryan Fuller, who created the imaginative, not completely awful "Pushing Daisies." Less hopeful: Fuller is also developing a show based on "Silence of the Lambs." This undoubtedly essential "Munsters" update comes in the midst of an unprecedented glut of reboots and reimaginings, all thick with the promise that No, really, this will be very different. It will creepy and full of action and with a feminist theme. You know what's really different? A stinkin' original idea.

We have already endured the small-screen update of "Charlie's Angels" and the cinematic revival of "Footloose" – both of which, by the way, died on the vine. Broadway is now almost exclusively revivals, "jukebox musicals," and stuff based on old Whoopi Goldberg movies. We will soon be treated to both a new "21 Jump Street" and "Dark Shadows."

Other classics also up for a fresh look: "Godzilla," which you may recall, fared so well last time someone attempted it.  "The Crow."  "20,000 Leagues Under the Sea."  "Woody Woodpecker." Leonardo DiCaprio is currently considering a "Six Million Dollar Man" remake. Oh, and "rehearsal is for fags" impresario Brett Ratner may be redoing "The Last American Virgin."  I know I don't catch everything going on with the young folk, but has there been a great national longing that translates into "Give the people another 'Last American Virgin'!"? Have you seen the original? It's no "Porky's." Quite frankly, it's not even "Zapped!"

Tired old ideas aren't just spawning like Duggars, they're being cloned. There are currently two "dark and less campy" television dramas based on old fairy tales -- "Grimm" and "Once Upon a Time." There are two competing Snow White movies coming out in 2012, "Snow White and The Huntsman" and "Mirror Mirror." Both, of course, feature a totally kickass Snow White who doesn't waste her time trilling to little birds. She's busting heads! Even "The Munsters" will find itself vying for NBC's attention against another pilot the network has approved: "Frankenstein."  (Not to be confused with the movie of "I, Frankenstein," also currently in the works.) There are 300 million people in America. And four ideas.

Humans have always had a natural inclination toward returning to the same stories. It's why the plays of Aristophanes continue to be performed, why vampire tales still ignite the imagination, why "Doctor Who" never goes out of style. I'm not convinced, however, that's why remakes of "Get Smart" and "The A-Team" happen.  Every time a television show or movie gets underway, millions of dollars and hundreds of careers are on the line. It's understandable that a seemingly sure thing would have more allure than something riskier. (Again I say, "Community.") And sure, Hollywood has had a self-sucking parasite for eons. That element of terribleness existed even before Ernest made that "Beverly Hillbillies" movie all those years ago.

But all you have to do is sit through the trailers at the next movie you attend, or read what the network midseason replacements include, and you'll feel a little bit of contact death of the soul, a plague emanating from somewhere deep in the bowels of L.A. But I can't be alone in saying that I don't want to watch a movie because I saw it 20 years ago. And I sure as hell don't want to watch it because it was a crap TV series 20 years ago – no matter how edgy anyone promises that reboot of "Hangin' With Mr. Cooper" will be.