The bizarre history of the OWS counter-protesters 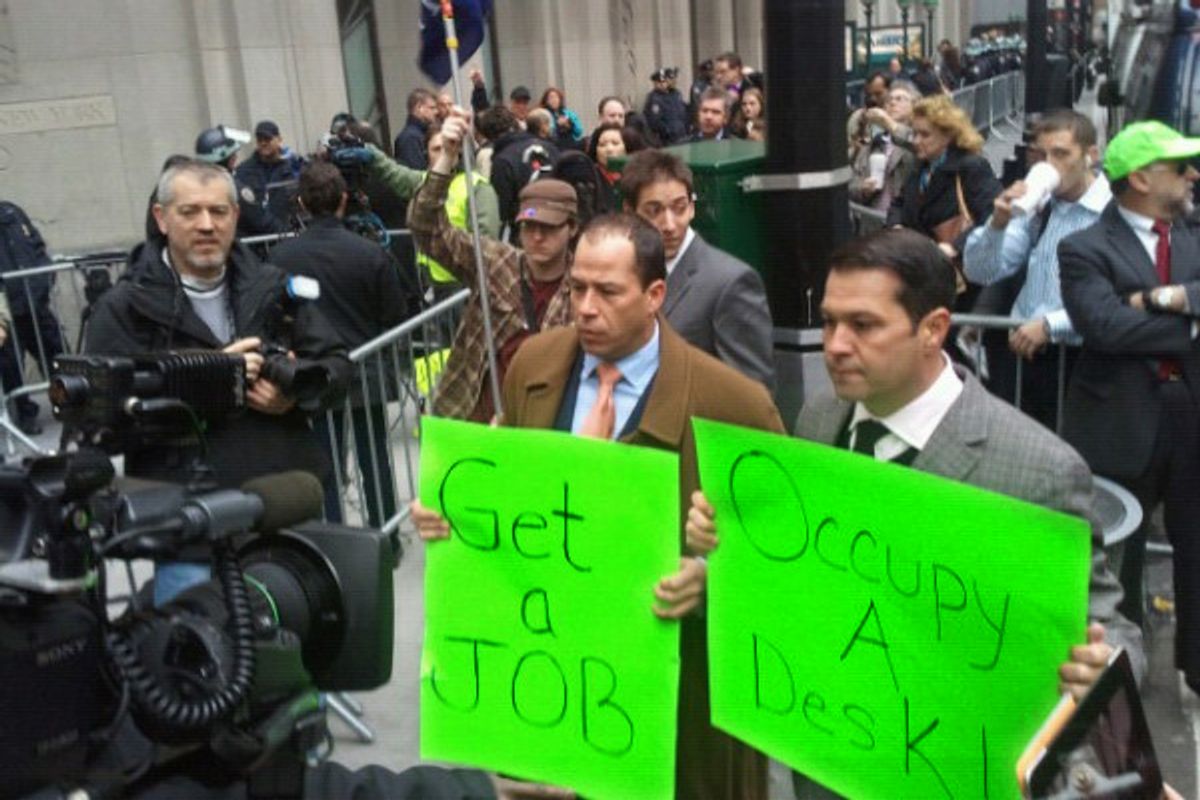 When brothers John and Derek Tabacco showed up at the big Occupy Wall Street protest Thursday holding "Occupy a Desk" and "Get a Job" signs, they claimed they were engaging in an organic counter-protest against dirty hippies who were preventing them from getting to work.  The local, national, and even international media promptly picked up their story.

But it turns out the Tabacco brothers have a long and sometimes checkered history of publicity-seeking and relentless self-promotion -- and their claim that 50 local businessmen are supporting the anti-Occupy protest is entirely unsubstantiated.

Besides owning a finance company called LocateStock in lower Manhattan, John Tabacco is a Fox News contributor, a failed talk radio host, an unsuccessful city council candidate from Staten Island, and a onetime participant in the VH1 show "My Coolest Years." An endorsement John Tabacco received in his city council campaign was later alleged to have been part of a pay-to-play deal. Derek Tabacco, for his part, is the CEO of what appears to be a defunct social network company for sports fans.

The Tabaccos showed up Thursday morning at the intersection of Wall Street and Broadway, the spot where news cameras had gathered to film protesters and the throng of NYPD officers who had barricaded the street and were demanding "work IDs" for entry.

TV camera crews were assembled in a packed media area pointed down Wall Street toward the New York Stock Exchange, which protesters had planned to try to disrupt, but which they ultimately got nowhere near because of multiple NYPD barricades. So bored cameramen, who had been waiting around all morning for action (much of which ended up happening a few blocks away), turned to the Tabacco brothers.

That's when I snapped the above photo. Each Tabacco brother was dressed more like a "Wall Street businessman" from central casting than an actual Wall Street businessman. They repeatedly said that occupiers were preventing them from getting to work; this seemed unlikely, as the police barricades were efficiently sorting protesters from actual office workers.

I asked them the name of the company they worked for a few times. They refused to say.

It all seemed like a pre-planned stunt designed exclusively for the benefit of the media, rather than any kind of organic counter-protest. And, as a media stunt, it worked remarkably well.

The story was picked up by multiple regional and national media outlets, as well as the Daily Mail. In one interview, Derek Tabacco referred to the occupiers as "these animals." In another, John Tabacco referred to himself as "a member of the 53 percent," a reference to the right-wing campaign around those Americans who "pay more in federal income taxes than they receive back in deductions or credits."

John Tabacco was promptly brought in to Fox News for a sit-down interview with Neil Cavuto:

Note that in the Fox interview Tabacco said he and his brother had "about 50 small business owners" who were there -- or there in spirit -- standing against the Occupy protesters.

In my interview with Tabacco, he said he had "about 25 business owners" backing the effort. "It started very organically between small business organizers," he told me.

Who are they? I asked.

"A lot of them are reluctant to stand in the street with a homemade sign. But we had their support," Tabacco said. He later identified just two supporters in an email: John Bostany of the Bostany Law Firm and Robert Steffanelli of Legend Securities.

Here is what I have been able to piece together about John and Derek Tabacco's history:

* In April, John Tabacco's local talk radio show, "Family Business," was cancelled just two weeks after it launched after he invited on Drita D'avanzo of the reality show "Mob Wives," and she repeatedly used profanity on the air. Another "Mob Wives" star Tabacco had on the show, Renee Graziano, also swore on air.

* Tabacco has also been involved in an online TV show called "Street Cents" that touched on mob themes. Here he is interviewing Victoria Gotti. The show now appears to be defunct.

* In 2009 John Tabacco mounted an unsuccessful bid for city council from Staten Island. He later acknowledged to the New York Post that he had received the endorsement of the Independence Party in the race after making a $10,000 loan to the party chairman's wife. The episode of (in the Post's words) "possible pay-to-play conduct" was brought to the newspaper by Tabacco himself for reasons that are not entirely clear.

* In 2010, Tabacco attempted to get on an Independence Party primary ballot to challenge U.S. Rep. Michael McMahon -- but failed to submit enough valid signatures. The McMahon camp challenged the signatures, alleging that Tabacco had submitted "sheets of names all signed by the same person." The Board of Elections ruled against Tabacco, finding that he had not collected the 497 signatures needed to get on the ballot. In response, Tabacco filed a lawsuit to appeal the ruling  -- but then withdrew it without explanation.

*  John Tabacco has been a regular guest on Neil Cavuto's Fox News show going back to 2008. Transcripts frequently identify him as a "Fox business analyst." Tabacco tells me he is a "contributor to Fox and CNBC" but he is not paid.

* John Tabacco is the CEO of LocateStock. According to its website, the firm's "Matador Platform" will help you "optimize hedging strategies by getting locates on hard-to-borrow securities." The site also throws around words like "revolutionary" and "unique" to describe its product. For a company offering "exclusive real time access to a global pool of securities," the website has remarkably low production values and features a lot of random Wall Street-themed stock art.  In an interview Tabacco told me the company provides tools that allow "retail traders" to engage in short-selling.

* Tabacco made "his nationwide television debut" on the VH1 series "My Coolest Years" in 2005, according to one of his bios.

* The brothers have a local sports show, which is produced by "Tabacco TV." In this episode, they box each other at a gym in Brooklyn:

(Hat tip to Will Smith and Adam Katz for the find.)

* John said his brother Derek is the CEO of FreeTheFan.com, described as "a competitive social community for sports fans." But the site appears to be defunct, and its Twitter feed, which has six followers, was last updated in 2009.

* UPDATE: Derek Tabacco also appeared on season 4 of the Bravo reality show "Millionaire Matchmaker." (Thanks to reader Lizz K for the tip.)

So what's next for the Tabaccos? It sounds like they're going to ride the anti-Occupy theme for as long as possible. There is now a "wallstfighters" Twitter feed.

"We had a strategy session last night," Tabacco told me. "We have a couple strategic counter-protests coming up." But, he added, they're not ready to reveal the details.