What the 99 percent can give American soldiers

I'm proud to put my life on the line to defend your freedoms. Please don't take them for granted 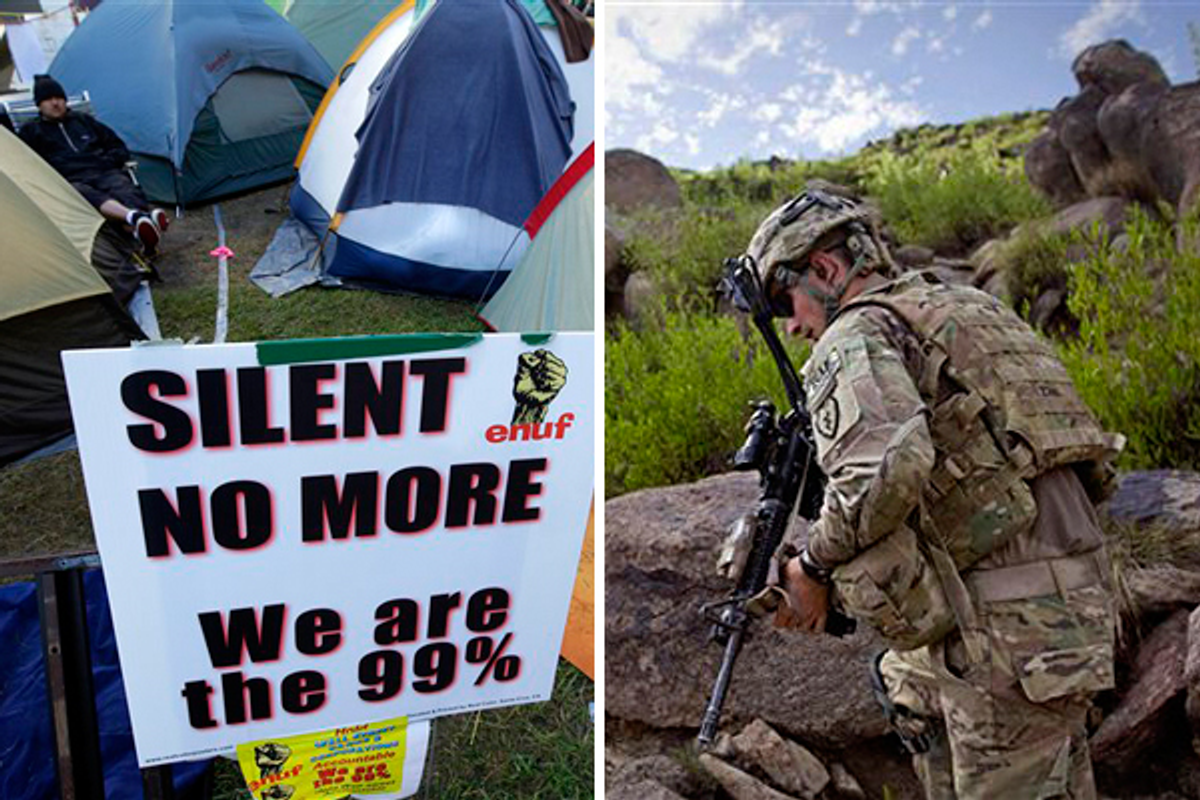 We received this letter from Salon Core member Alexandra Grey.

There's something that I want to say about the Occupy Wall Street movement going on right now. I will say from the outset that I am a member of the Army, deployed right now, but that I do not speak for anyone but myself, and certainly not for the Army as a whole or as an institution.

I am deeply encouraged by the fact that people want to stand up, publicly, against things they feel have harmed them. It's the most fundamental right in our system of government, and it simply isn't used often enough. But I really don't think that standing in a public park burning effigies is going to accomplish what is wanted by that mystical 99 percent. This occurred to me earlier when someone handed me a care package sent on behalf of the "Any Soldier" program. It was thoughtful and I appreciate that total strangers would want to send me toothbrushes and Snickers bars, but it hit me that those aren't really the things I - or any soldier - truly need. I thought I would submit a request for what we really need: a little more direction and purpose. Or, to be more precise, a better reminder of what we are fighting for.

I joined the military because I was taught, and have inwardly always believed, that freedom is earned, not given. There is no fundamental "right" to freedom. It has always had to be earned, over and over again, and that a few earn it for many is rarely remarked upon. I have no qualms with that; a draft would be an utter disaster, and those of us who love the Army for itself would soon be crowded out with those here simply to check a box in life. The Army is the center of my soul, it gives me everything I could ever have wanted or needed, and I will remain with her until the end of my life - however long or short that may be in coming. Yet I have found, upon my several redeployments back home, that I am surrounded by those who do not regard freedom as a thing to be earned, or cherished, or carefully used - they have found it a thing they can claim when they want and discard when they don't, a thing to be used, to be abused. Occupy Wall Street is a noble idea, and yet it has been turned into an opportunity for college students (among others) to smoke pot, shout some slogans, and camp out for a couple of days before falling comfortably back into old routines. Nothing changes, except perhaps some bragging rights.

A better example, perhaps: I have never voted for the President of the United States while in the United States. Not once since I became eligible to vote in late 2000 (sadly, too late for that election). 2004: Afghanistan. 2008: Egypt. 2012: Afghanistan. Care to lay odds where I'll be in 2016? In 2004, Afghanistan held the first free elections in two generations. To be fair, it was probably the first free elections it has ever truly held. According to polling statistics released at the time, 95 percent of eligible, registered Afghan voters showed up and voted. 95 percent! That same year, one month later, were the U.S. elections. 25 percent of the electorate showed up. I had never been more ashamed of my country in my life. At that time American servicemen were dying at a rate of almost 20 a week and 75 percent of their fellow countrymen, the ones they were supposed to be defending, were too lazy to go vote for the man who would send them there to die. The stats for Afghan voters could have been off by 60 percent and there STILL would have been a higher proportion of Afghans voting than Americans.

I would like to submit a request for a different kind of care package, if you don't mind. I would like it, very much, if the American people would do more than camp out in a park, burning effigies of bankers. I would appreciate it if you would please vote in the next election, whether it be presidential, congressional, state, or municipal. I would like you to actually sit down and Google the candidates, and pick the ones that advocate what you advocate. I would like you to sit down with your kids at night and teach them not only how to read the Constitution, but how to understand it. Most of the kids I graduated college with can't do that. I would appreciate it if you would exercise every single right granted to you in the Bill of Rights, and to do it consciously and conscionably. Write your Senators when they fail you. Protest when you think it necessary. Shake up the system, remind everyone - including yourselves - what it costs and what it's worth. It's worth a lot. You need only be over here to know that.

I don't mind dying for my country. She's given me everything I am and offers everything I want to be. To die for her would be an honor. But I would really, really like to die for something that is worth my death, and it worries me when 75 percent of my own people can't be bothered to try. I'm not the 99 percent, and I'm not the 1 percent. I'm the 0.0045 percent willing to give my life when a lot of you, dear readers, cannot even give an hour to go vote in a poll, or protest an unfair law, or defend your fellow citizen against injustice. It really isn't that hard. It certainly isn't harder than strapping on a pack and walking into a village surrounded by people who hate you.

I appreciate the toothbrushes, but I'd rather you gave me something else. I can buy a toothbrush; they sell them at the PX for $1.99. I would rather you gave me a country that is truly, honestly worthy of us, the military, and of you, the People. None of us can walk in off the street and buy that; it has to be earned.