In misleading TV ads, the bank casts itself as a champion of the working class and small business. Reality check! 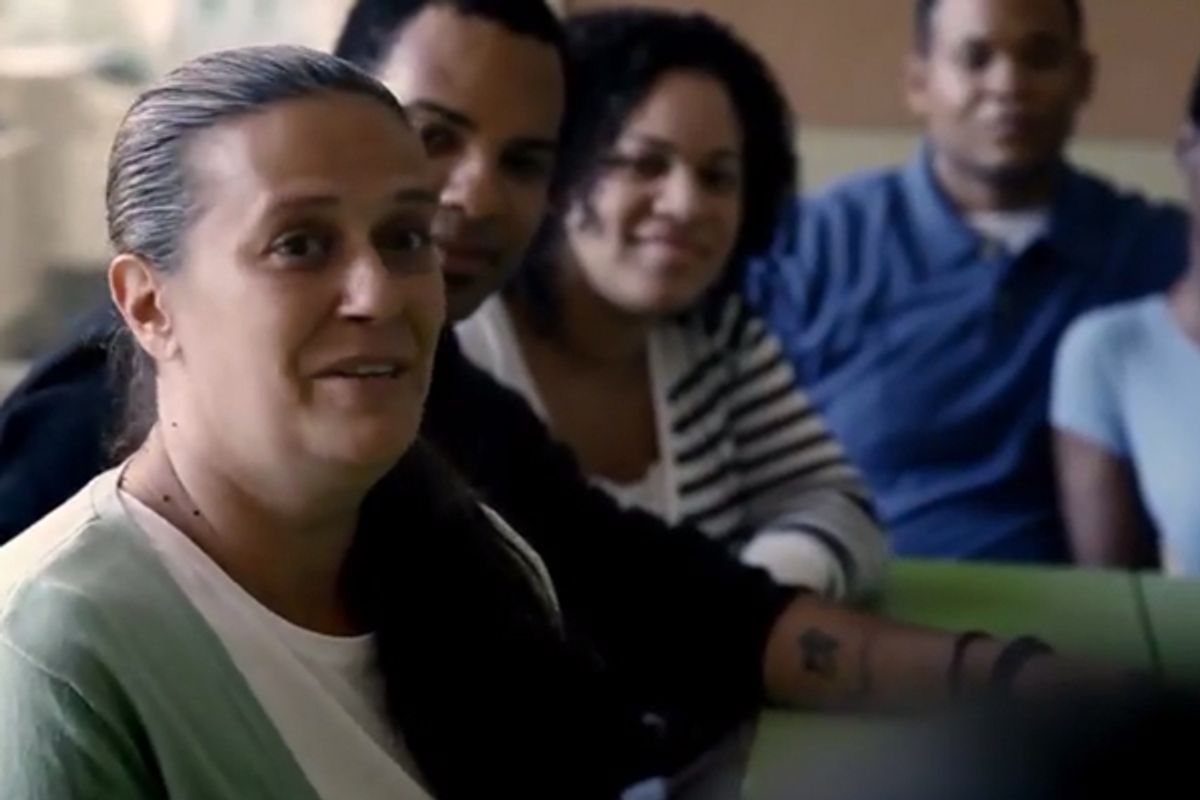 A still from a Bank of America marketing campaign. (YouTube)
--

In the midst of our foreclosure crisis, it felt good to hear the TV commercial say that some homeless people in Brooklyn, N.Y., were able to move into decent housing. One little girl who had been living in a shelter was thrilled to have her own room, and with air-conditioning yet! Better still, the new building her family moved into was solar-powered.

This was good, and though I knew that some corporate logo at the ad’s end would lay claim to that goodness, even cynical me was surprised to see that it was Bank of America’s. After all, the country’s largest mortgage servicer, which has foreclosed on hundreds of thousands of homes, is surely responsible for creating a few more homeless families than it’s helped.

It’s hard to believe that BofA is bragging about helping poor and working-class people when it’s still actively trying to evict them. Or that its business loans have allowed some small companies to hire more people, as I saw in a spot just days after BofA announced it was laying off 30,000 employees.

Clearly, Bank of America hopes that we won’t connect what’s in the commercial world with the real one.

The commercials are part of BofA’s TV, print and Web campaign running through the end of the year, with TV spots hitting a dozen markets across the country. And largely, the bank’s ads do get across the feeling that it’s working on your behalf, feeling your pain, facilitating your joy. Here is BofA in Skokie, Ill., where the head of an athletic services company tells how the Bank of America Chicago Marathon (he uses the whole name) has allowed him to create more part-time jobs. Here it is in L.A., touting a loan it made (71 years ago!) that helped a family start up the popular hotdog eatery Pink; and here it is in New York’s Chinatown, helping a doctor bring radiation treatment to cancer patients who might otherwise not receive it.

Corporations of all kinds have been running paeans to their own philanthropy and do-good projects for decades. This is nothing new.

But what makes the Bank of America campaign stand out is how dramatically the context around it has changed. These ads show nary a pixel of how our world has been altered by the capitalist collapse: They’re still peddling good but small deeds to a planet furious at the devastating role finance played in the housing and jobs crises, the unfairness of the big bank bailouts, and all the income inequality issues finally made evident by Occupy Wall Street.

Of course, Bank of America is hardly the only big bank desperate to play the good corporate gent. JP Morgan Chase (which Alternet and the Media Consortium recently ranked ahead of BofA as one of the five “’Worst’ Mega Banks in Political Corruption”) is running a TV ad promoting  its commitment (along with a gaggle of other big corps) to hiring 100,000 veterans by 2020.  What’s interesting about Bank of America’s campaign is its idea that the best way to take shelter from a big global crisis it helped create was to go hyper-local, focusing on small businesses and community projects, all far from the internationally connected boardrooms where the disaster was birthed. Says BusinessWeek: “The company is trying to improve its standing with local officials and small firms because ‘research shows us that's a more important indicator of reputation,’ [global head of strategy and marketing Anne] Finucane told employees.”

And maybe they’re on to something. More people will probably see Bank of America helping a formerly homeless little girl than will read in the New York Times about the judge who told a BofA lawyer that the bank's refusal to modify a homeowner’s mortgage was “disgusting.”

Justice Catherine M. Bartlett of New York State Supreme Court cut off the lawyer. You, she said, are telling me lies. “Bank of America got a bailout, and this is an outrage, how this man has been treated,” she said. “Hard-working, middle-class Americans are trying to make it, trying to refinance with your bank.”

Either bank officials show up in person, the justice said, or I’m going to order them “here in handcuffs.”

Bank of America won’t disclose the cost of its image-salvaging campaign, but according to Reuters, the company spent $1.1 billion on marketing in just the first half of this year. That’s a nice chunk of the mere $20 billion that the Obama administration wants all the big banks to fork over to help with foreclosure relief; in exchange, the nation’s state attorneys general would agree not to pursue major legal action against the banks and promise not to investigate their role in crashing the economy. (Some AGs, like New York’s Eric Schneiderman and Delaware’s Beau Biden, are fighting any such deal and are instead demanding $200 billion.)

To be fair, Bank of America does some good work with nonprofits. Sarah Shannon, deputy director of the community organization Heart of Brooklyn, told me that BofA’s help, including a $200,000 grant in 2006, has been “transformative.”

But corporate giving in America, whether in the form of sponsorships, cause-related marketing or “partnerships,” is minuscule compared to the government aid slashed by the politicians they support.

And every time the big banks appear to giveth, they more sneakily taketh away. After public outrage forced BofA to drop its plan to charge customers $5 a month to use their debit cards (something the other banks were eager to roll out until they saw the backlash against BofA), the banks have begun charging new and better-hidden fees.

In fact, the process of extracting more money from us is similar to the way the banks try to extract more positive emotions from us: They’ll take it wherever, whenever, however they can get it, in hopes that it will confuse the situation. Because clarity has an anti-corporate bias.

Leslie Savan, author of “Slam Dunks and No-Brainers: Pop Language in Your Life, the Media, and, Like…Whatever,” blogs for The Nation.