Why are we still eating bluefin tuna?

This beautiful fish is in serious trouble. Fishermen, diners and chefs need to band together in order to save it 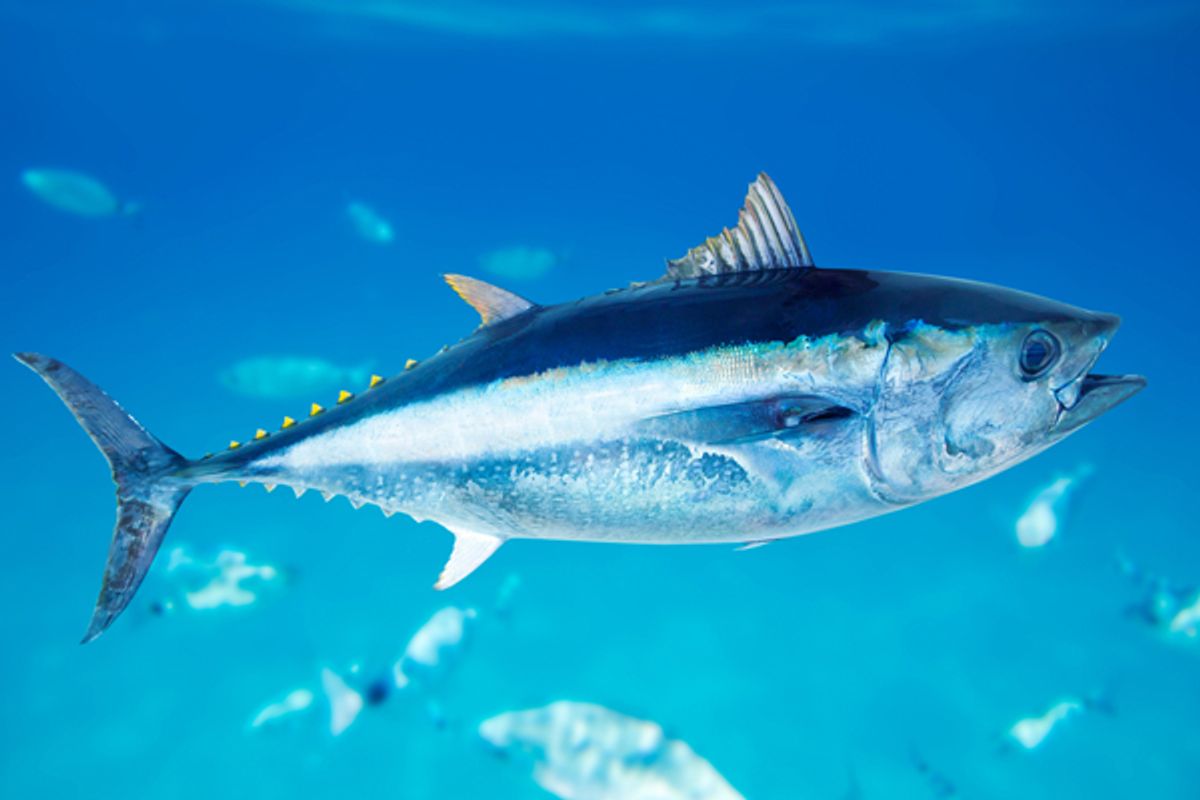 If you eat fish regularly, you've probably grown used to regularly being told by conservation groups — or that slightly irritating, politically correct friend — that certain fish shouldn't be eaten: American striped bass, Atlantic swordfish, Chilean sea bass and Caspian sturgeon have all been the focus of vocal consumer and chef boycotts. Happily, some of these campaigns have been effective in helping fish populations recover. But amid all the sustainable seafood media noise, we've somehow managed to let the biggest and arguably most beautiful fish of all slip away.

The Atlantic bluefin tuna — an animal that reaches 1,500 pounds, swims at 40 miles per hour, heats its blood 20 degrees above ambient and crosses the breadth of the ocean — is in serious trouble. The western, American stock has declined by about 80 percent and the Mediterranean-spawned population by about 70 percent. Even after the fish garnered a series of major PR hits (such as campaigns by Greenpeace and Sea Shepherds to liberate netted tuna in the Mediterranean last year and my subsequent New York Times Magazine cover story), the bluefin remains persistently present on menus around the country and around the world.

Why is this the case? Why is any chef out there still serving bluefin?

The answer is complicated, and a work in progress. So much so that the answer may change by the time you read this article. But as delegates to the International Commission for the Conservation of Atlantic Tunas (ICCAT) sit down this week in Istanbul to discuss the fate of the bluefin, it’s useful to identify a few reasons why we are still eating what ranks among the most abused fish in the sea.

Reason No. 1: Confusingly, there is more than one species of bluefin

Since the seafood world has few recognizable brands, the "brands" seafood consumers respond to most are species names. "Sea bass" "snapper" and "cod" all have many actors playing those respective, marketable roles. So it is with the bluefin.

There are not one, but three species of bluefin: the Atlantic, the Pacific and the southern. Each species has declined severely, but each fares differently from year to year. Recently, Pacific bluefin have probably been the bluefin most commonly served in American restaurants and some argue that this is due to the Pacific being the healthiest of the three species. Others would point out that we have yet to even complete a full stock assessment of Pacific bluefin, and we have no idea how many there may be. And quite often, because of poor labeling and tracking, an even more distantly related fish, the bigeye tuna, may be fitted in and passed off as bluefin when no bluefin can be found. But whatever the case, the confusion of species means that different creatures can be substituted when a deficit occurs in a particular ocean, giving a false sense of abundance in the marketplace.

Reason No. 2: Every fish, even one in serious trouble, can have a good year, which can cause bad decision-making by regulators

One of the trickiest things about managing fisheries is that fish populations go up and down naturally — a typical fish abundance graph looks something like the Dow Jones going through successive bear and bull markets. This is because most fish play penny stock odds that only occasionally yield significant dividends. Large blue water fish like tuna lay hundreds of thousands of eggs, and out of those, only a few individuals survive. But a slight shift in temperature or planktonic blooms or some other random factor can radically, albeit temporarily, shift the odds in a given fish's favor. When this happens a boom year ensues, something that can persuade fishermen and science-ignorant regulators that the fish has recovered and can now be caught with abandon.

The Atlantic bluefin did indeed have a year of "strong recruitment" a few years back and if this good class of fish was protected — as was done in the recovery of American striped bass — it could probably fuel a recovery for future generations. But instead, regulators seem to have taken a short-term approach, fishing this momentary good blip as if it were a long term trend. Not a good idea. As Andre Boustany, a postdoctoral tuna researcher at Duke University wrote me, regulators are not taking into account “that there are several years with extremely poor recruitment behind this good one, so when looking at the overall picture, it becomes quite a bit less rosy.”

Reason No. 3: The Atlantic bluefin trade involves dozens of countries, and a consumer boycott would have to be global to be effective

Most successful fish rebuilding campaigns to date have had one distinctive quality: The fish being rebuilt were pursued by just a few nations. In the 1980s, only Americans were fishing striped bass when the fish went into decline. When consumer pressure to preserve them became political, draconian limits and even moratoria on the catching of stripers could be imposed.

But there really is no single lever that can be thrown to stop the vast global bluefin-catching machine. The majority of Atlantic bluefin are consumed in Japan, where fish abstinence campaigns are unheard of. And the Japanese don't really do any of the catching of Atlantic bluefin anymore. Most of that happens in the Mediterranean, where 20-plus countries that range from post-revolutionary Libya to desperate Greece share portions of an overall quota. A recent study by the Pew Environment Group found that the total poundage of Atlantic bluefin sold in the world exceeded the legally sanctioned quota by 50 percent. Indeed, one of the biggest "asks" being made by conservationists at this fall's ICCAT meeting is to institute an electronic tracing system aboard bluefin vessels, so we can at the very least nail down who is catching what.

So, will the Atlantic bluefin tuna ever get a break? There are nascent campaigns like that of World Wildlife Fund which maintains a badge-of-honor list of purveyors that have exited the bluefin trade. And there is a coterie of artisan hook-and-line and harpoon fishers on both sides of the Atlantic which have the potential to fish the bluefin less egregiously than the large ships and spotter planes that regularly scoop up entire schools in today's over-the-top fishery.

But like many of the major environmental problems facing humans today, it is no longer up to a handful of nations to change the dynamics of the bluefin business. Regulators, fishermen, chefs and diners from New York to Paris to Beijing to Tokyo will all have to agree that a fish has no business being on a menu until it is managed well enough to endure.