From the gay dads to the men dressed like "Cruising" extras, our clientele taught me a whole new perspective on sex 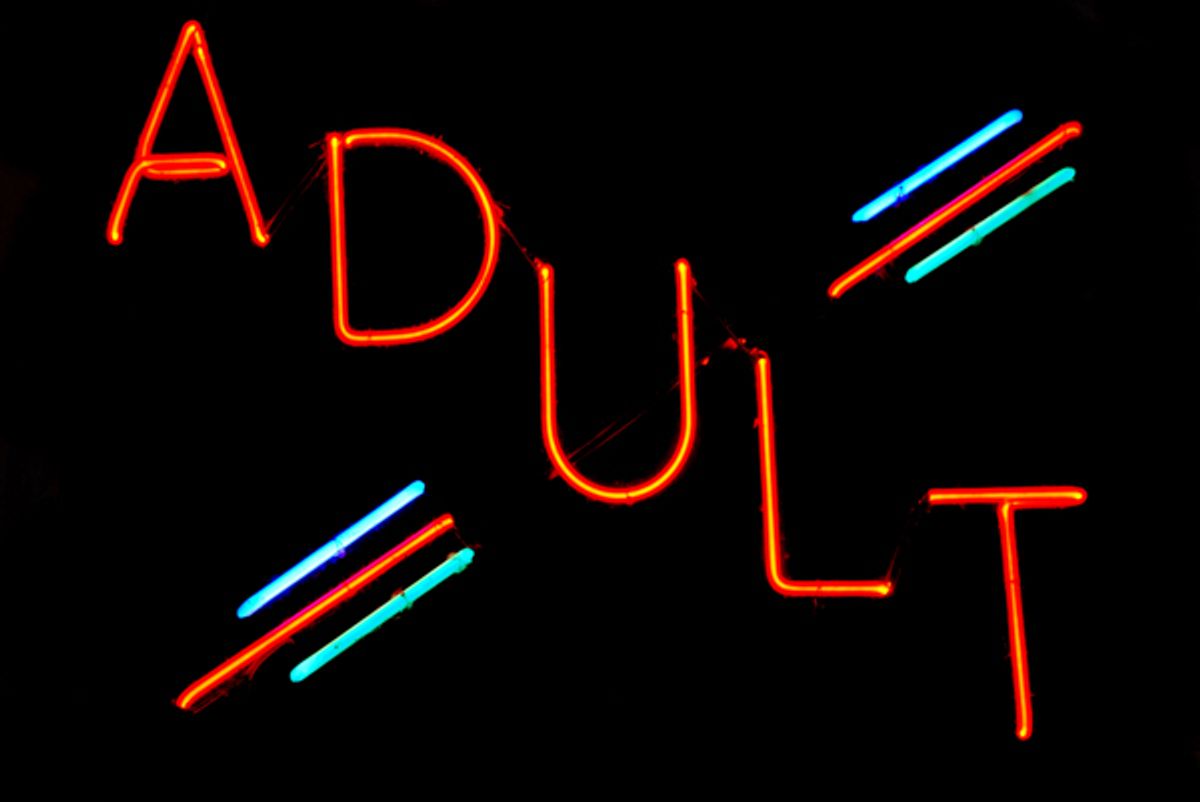 The short, squat man in the Dallas Cowboys windbreaker staggers out from the arcade, propping himself against the wall. Between that and the sweat beading his body, I know he’s left me a surprise in one of the booths: My first dirty needle. A minor panic fills my body. I hope he hasn’t buried it underneath a pile of semen-encrusted paper towels. No job is worth hepatitis. Especially not a job monitoring glory holes at a cruising spot across the street from a middle school in Portland, Ore.

I don rubber gloves, bravely grab my pickup stick and swallow the remainder of my coffee. It’s not even midnight yet. I remember the advice of my former roommate who -- once and again -- occupied the same stool I stood up from.

“Do you know how to get rid of dirty needles?”

“Put them in a coffee cup or something. That way no one will stick themselves.”

At the time I laughed knowingly, hoping he was joking. I’ve never seen a dirty needle before, though I have worked in places where the bathroom was the local shooting gallery. Now, after six months on the job, I'm wondering how much longer I can stand it.

My last job was in an air-conditioned office in a business park in Woburn, Mass., as a draftsman designing laboratories. It was like being a kitchen designer but even more boring. Every day I went into work I contemplated suicide. Was this to be the rest of my life? I finally got fired, the combination of poor job performance, a ruined economy and good old-fashioned New England insularity. Why not move to one of the most economically depressed cities in America during the nadir of a recession? And so, I landed at Portland’s charming cruise central after six months on funemployment.

I wasn’t just numb at work. I would drive around, high as a kite in Portland’s suburbs, driving inappropriately fast and blasting Black Flag’s "Loose Nut." After work, I’d sleep for three or four hours and begin my daily regimen of top-shelf weed, gas station coffee and Miller High Life again. I felt nothing, but I still wanted to feel less.

I became so benumbed that it would have scared me, had I still been capable of such self-concern.

Our customers fall, almost universally, into one of four categories: First, the “gay dads.” These guys present more as construction workers than interior designers, and I don’t mean the one from the Village People. I mean my actual father, a retired ironworker from Boston who makes a ponytail look positively butch. Next come the “100-yard boys.” If you can’t tell these guys are gay from a football field away you’re blind, clueless or lying to yourself. Third, we have tomboyish lesbians who come in to raid our “twink” section, porn featuring hairless, younger looking men, often depicted as victims of sexual violence or, alternately, “discovering their sexuality.” Finally, there’s a mixture of young gay hipsters, primarily genetic males, but also a healthy crop of transgender men (that’s female to male for the uninitiated). The hipsters, no matter what their gender history, long for the days of pre-HIV/AIDS homo culture, dressing like extras from Al Pacino’s laughably bad "Cruising."

Most of my customers are friendly, though not to the point of awkwardness. I can count on one hand the number of men who’ve made a pass at me. The gay dads keep mostly to themselves, but sometimes talk to me about the job or their kids from a previous life. The 100-yard boys hotfoot it back to the booths after giving me the once-over twice. The lesbians and gay hipsters are more in my demographic and usually take a second to chat with me about Morrissey, Tom of Finland comics and Bay Rum aftershave. I joke that most trips here start with the words “Honey, I’m heading to Home Depot,” but in all my time here I’ve never heard a wife mentioned, seen a wedding ring or noticed any evidence that these men are anything but what we in the biz call “strictly dickly.” The gay dads might have “looked straight,” but I have never so much as seen the imprint of a wedding band.

When I get back to the arcade, I walk through a line of men coming out the door of a heavily occupied booth. Two of our regulars are playing host in a booth on the arcade’s main drag, a hetero couple in their 30s. She boasts cartoonishly large fake tits and he likes watching her blow strange guys. Someone wrote her name and phone number on the wall of a large booth in the corner. Tonight they invite me to the party. I politely decline, feeling neither excitement nor flattery nor repulsion.

I hunt around the arcade, eyes peeled for a dirty needle. Sure enough, in the furthest corner booth, the one most likely to contain a trash can full of urine at the end of the night, a syringe lies in several micro-puddles of mixed bodily fluid of indeterminate origin. Leaving it in the middle of the floor is actually a kindness -- I won’t have to hunt around in the can for it and possibly stick myself. I use my pickup stick to get it off the floor, hold it an inch or so from my face, examining it closely, all my previous anxiety disappearing. I throw the needle into a coffee cup and bound past the line of men, incapable of distinguishing which moaning and slurping is coming from the ubiquitous televisions and what’s coming from the “activity” in the booth.

Despite my willingness to get up close and personal with the needle in the booth, I walk to the Dumpster with the trash bag between two fingers, at arm's length. Dropping the bag to the ground, I pulled out the key to the Dumpster’s padlock. I’m not sure if we locked the Dumpsters because the boss doesn’t want to pay to have the neighbors’ trash thrown away or because it’s anyone’s guess what people will throw away there. I pull the heavy plastic door of the Dumpster back, trying to balance it on the wall. Because of the placement, this is hard to do, requiring no small amount of effort. After I finally get the door to lean against the grimy brick exterior and lean over to pick up the bag, the door slams shut, making me jump about 6 feet in the air. Across the street, three cruisers have lights going with the junkie up against a steel fence, hands on his head.

After successfully getting the bag into the Dumpster, I feel shivery, like I saw a cockroach in the kitchen and now everything looks like roaches. My brain flashes a million possible doomsday scenarios whereby I pricked myself with an HIV-infected needle and didn’t notice. Every little cut and nick on my body becomes a reason for anxiety. I try not to think about the guy at the bathhouse across town who got an antibiotic-resistant staph infection or the possible risks of emptying bags filled with semen, blood, urine and the “frothy mix” known as Santorum. (Thanks, Dan Savage, for giving me a word for what I mopped up every day.)

The next day I trip over the writer’s wet dream and worst nightmare, the content farm. After some quick math, I figure that five pages of “How to Ride a Bicycle in Ankara” and “Grinding Coffee Beans for Small Business Owners” would pay as much as a day at the booths. It doesn’t take much to convince me to quit. Stepping high, I walk into my boss’s office, dropping my resignation letter on his desk. I spend my last two weeks nearly dancing around the booths, picking up the same sperm-crusted rags with aplomb, rather than dismay. I greet customers with a wide smile, telling them about my plans to leave the porn store and my new life writing, even if it was for slave wages. Much to my surprise, I still had a soul to save.

Nicholas Pell is a full-time cynic and recovering factotum from Hollywood. He can apparently pay his bills writing.