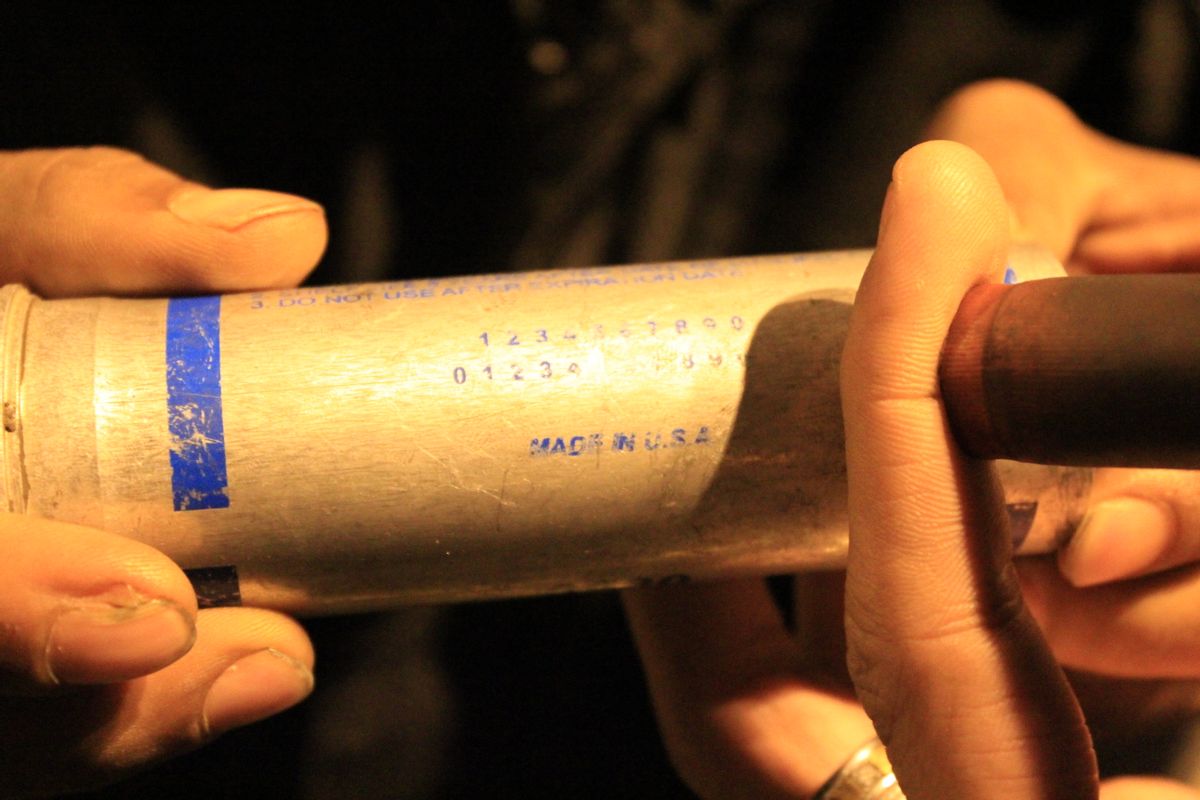 "Made in USA" teargas cannister
--

CAIRO--Late Saturday evening the air here was heavy with suffocating smoke as Egyptian security personnel battled street protesters for control of Tahrir Square.  A protester, who told me his name was Karim,  held up a used teargas canister and pointed to the label: "Made in USA."

“People need to know where this comes from,” he told me as the crowd chanted:  “The people demand an end to military rule.”

The serial number and blue markings on the  tear gas canister indicate that it was manufactured by Combined Systems Incorporated (CSI), a weapons manufacturer based in Jamestown, Pennsylvania.

This is not the first time CSI ‘s products have been used against Egyptian citizens.  During Egypt’s January revolution,  CSI tear gas was employed by the Mubarak regime against demonstrators in Tahrir Square.

Nearly nine months later, these same canisters have been raining down on demonstrators for the past  eight hours as Egyptian security forces clash with protesters throughout downtown Cairo. The  violence on Saturday came  a day after peaceful protesters occupied Tahrir Square on Friday demanding the ruling Supreme Council of the Armed Forces (SCAF) accelerate the transition to civilian rule.

The use of U.S-made tear gas against the protesters  in Cairo is the result of  the U.S. military aid policy.  In exchange for nearly $1.3 billion in aid, the United States requires that Egypt buy its hardware from U.S. manufacturers.

CSI’s website announces that the firms sell an“ innovative line of less-lethal munitions, tactical munitions and crowd control products . . . to a wide range of international military and law enforcement customers.” CSI will not confirm or deny whether they sell arms to Egypt, but their distinct labels are evidence enough.

According to the State Department web site, the United States gave Egypt $1.2 million in 2009 for tear gas, riot control agents, and associated equipment.

During Friday’s protests, a diverse group of political parties and activists joined together for a rowdy but peaceful denunciation of military rule.  A small group of demonstrators stayed the night, vowing to occupy the Square until the military steps aside.

Beginning in the early afternoon on Saturday, security forces moved to clear the square of the remaining demonstrators, but the protesters stood their ground.   By late Saturday night,  after nearly eight hours of violent street clashes,  protesters had secured the periphery of Tahrir Square and were checking ID’s at makeshift barricades.

Chaos still reigned outside the Square as security personal faced down groups of rock-throwing youths.

On the corner of Mohammad Mahoud Street,  across from Tahrir Square, young men with their faces covered in surgical masks rushed forward to grab a smoking canister and fling it back at a line of riot-police.

A block away,  on Tahrir Street,  a resident hurled  Molotov cocktails at the advancing riot police  and dropped water bottles to exhausted protestors.  At the end of the street, protesters lit piles of trash on fire to obstruct the oncoming policemen.

The wounded were treated at a makeshift hospital set up outside a Kentucky Fried Chicken at the edge of Tahrir Square.  A man, who identified himself as a doctor, tolds me that hundred of protesters have been wounded and several have died.

Reports on military-controlled State TV blamed the violence on the protesters. But thousands ignored the propaganda and streamed into Tahrir Square to express their dissatisfaction with the military and to take part in the clashes.

Rami Sizar, a native of the working class neighborhood of Imbaba,  told me he came straight to the Square as soon as he heard the police were clashing with protesters.  “I didn’t believe the State TV,” he explained.  “Everyone has the right to protest in the Square,” his friend Amr added.

In the middle of Tahrir Square,  protesters held up teargas canisters and bullet shells and ask journalists to take pictures.  One man gestured at a canister and asks me why the United States was helping the SCAF “attack” the Egyptian people.

As of midnight in Cairo, there was no indication that the protesters would leave Tahrir Square.  A group of men have hoisted a banner which reads “the people want a civil ruling council.”    The violent crackdown seems to have only strengthened the resolve of protesters.  “The revolution continues,” tweeted activist Hossam el-Homalawy, as protesters braced themselves for further attacks.