The OWS victory no one's talking about 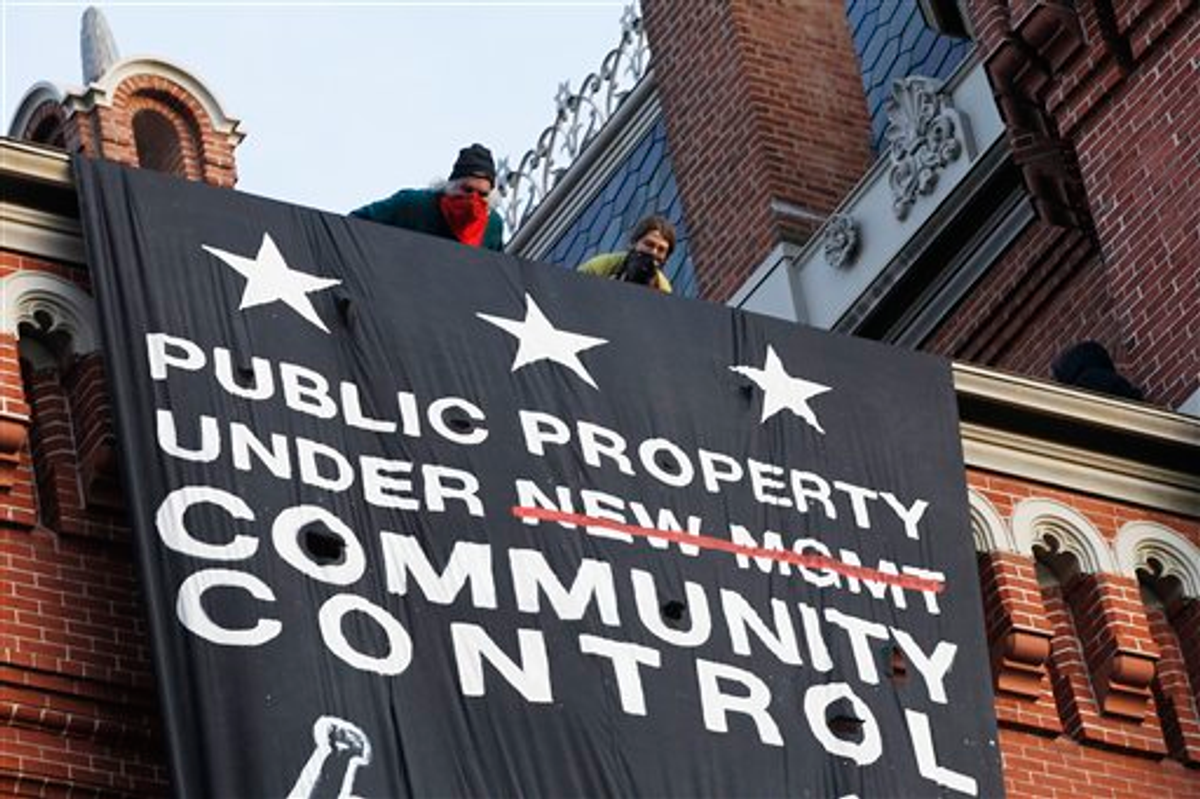 No headlines announced it. No TV pundits called it. But on the evening of November 8th, Occupy Wall Street, the populist uprising built on economic justice and corruption-free politics that’s spread like a lit match hitting a trail of gasoline, notched its first major political victory, and in the unlikeliest of places: Ohio.

You might have missed OWS's win amid the recent wave of Occupy crackdowns. Police raided Occupy Denver, Occupy Salt Lake City, Occupy Oakland, Occupy Portland and Occupy Seattle in a five-day span. Hundreds were arrested. And then, in the early morning hours on Tuesday, New York City police descended on Occupy Wall Street itself, fists flying and riot shields at the ready, with orders from Mayor Michael Bloomberg to evict the protesters. Later that day, a judge ruled that they couldn't rebuild their young community, dealing a blow to the Occupy protest that inspired them all.

Instead of simply condemning the eviction, many pundits and columnists praised it or highlighted what they considered its bright side. The Washington Post's Ezra Klein wrote that Bloomberg had done Occupy Wall Street a favor. After all, he argued, something dangerous or deadly was bound to happen at OWS sooner or later, especially with winter soon to arrive. Zuccotti Park, Klein added, "was cleared... in a way that will temporarily reinvigorate the protesters and give Occupy Wall Street the best possible chance to become whatever it will become next."

The New York Times' Paul Krugman wrote that OWS "should be grateful" for Bloomberg's eviction decree: "By acting so badly, Bloomberg has made it easy to see who won’t be truthful and can’t handle open discourse.  He’s also saved OWS from what was probably its greatest problem, the prospect that it would just fade away as time went on and the days grew colder."

Read between the lines and what Klein, Krugman and others are really saying is: you had your occupation; now, get real. Start organizing, meaningfully connect your many Occupy protests, build a real movement. As these columnists see it, that movement -- whether you call it OccupyUSA, We Are the 99 percent, or the New Progressive Movement -- should now turn its attention to policy changes like a millionaire's tax, a financial transaction fee or a constitutional amendment to nullify the Supreme Court's Citizens United decision that loosed a torrent of cash into American elections. It should think about supporting political candidates. It should start making a nuts-and-bolts difference in American politics.

But such assessments miss an important truth: Occupy Wall Street has already won its first victory its own way -- in Ohio, when voters repealed Republican governor John Kasich's law to slash bargaining rights for 350,000 public workers and gut what remained of organized labor's political power.

Don't believe me? Then think back to this spring and summer, when Occupy Wall Street was just a glimmer in the imagination of a few activists, artists and students. In Washington, the conversation, such as it was, concerned debt, deficit and austerity. The discussion wasn’t about whether to slash spending, only about how much and how soon. The Washington Post's Greg Sargent called it the "Beltway Deficit Feedback Loop" -- and boy was he right.

A National Journal analysis in May found that the number of news articles in major newspapers mentioning "deficit" was climbing, while mentions of "unemployment" had plummeted. In the last week of July, the liberal blog ThinkProgress tallied 7,583 mentions of the word "debt" on MSNBC, CNN and Fox News alone. "Unemployment"? A measly 427.

This all-deficit, all-the-time debate shaped the final debt-ceiling deal, in which House Speaker John Boehner and his "cut-and-grow"-loving GOP allies got just about everything they wanted. So lopsided was the debate in Washington that President Obama himself hailed the deal's bone-deep cuts to health research, public education, environmental protection, childcare and infrastructure.

These cuts, the president explained, would bring the country to "the lowest level of annual domestic spending since Dwight Eisenhower was president." After studying the deal, Ethan Pollock of the Economic Policy Institute told me, "There's no way to square this plan with the president's 'Winning the Future' agenda. That agenda ends." Yet Obama said this as if it were a good thing.

Six weeks after Obama's speech, protesters heard the call of Adbusters, the Canadian anti-capitalist magazine, and followed the lead of a small crew of activists, writers and students to "occupy Wall Street." A few hundred of them set up camp in Zuccotti Park, a small patch of concrete next door to Ground Zero. No one knew how long the occupation would last, or what its impact would be.

What a game-changing few months it’s been. Occupy Wall Street has inspired 750 events around the world, and hundreds of (semi-)permanent encampments around the United States. In so doing, the protests have wrestled the national discussion on the economy away from austerity and toward gaping income inequality (the 99 percent versus 1 percent theme), outsized executive compensation, and the plain buying and selling of American politicians by lobbyists and campaign donors.

Mentions of the phrase "income inequality" in print publications, web stories and broadcast transcripts spiked from 91 times a week in early September to nearly 500 in late October, according to the website Politico -- an increase of nearly 450 percent. In the second week of October, according to ThinkProgress, the words most uttered on MSNBC, CNN, and Fox News were "jobs" (2,738), "Wall Street" (2,387) and "Occupy" (1,278). (References to "debt" tumbled to 398.)

And here’s another sign of the way Occupy Wall Street has forced what it considers the most pressing economic issues for the country into the spotlight: conservatives have lately gone on the defensive by attacking the very existence of income inequality, even if to little effect. As AFL-CIO president Richard Trumka put it, "Give credit to the Occupy Wall Street movement (and historic inequality) for redefining the political narrative."

The way Occupy Wall Street, with next to no direct access to the mainstream media, commandeered the national political narrative represents something of a stunning triumph. It also laid the groundwork for OWS's first political win.

Just as OWS was grabbing that narrative, labor unions and Democrats headed into the final stretch of one of their biggest fights of 2011: an up-or-down referendum on the fate of Ohio governor John Kasich’s anti-union law, also known as SB 5. Passed by the Republican-controlled state legislature in March, it sought to curb the collective bargaining rights of 350,000 police, firefighters, teachers, snowplow drivers and other public workers. It also gutted the political clout of unions by making it harder for them to collect dues and fund their political action committees. After failing to overturn similar laws in Wisconsin and Michigan, the SB 5 fight was labor's last stand of 2011.

I spent a week in Ohio in early November interviewing dozens of people and reporting on the run-up to the SB 5 referendum. I visited heavily Democratic and Republican parts of the state, talking to liberals and conservatives, union leaders and activists.  What struck me was how dramatically the debate had shifted in Ohio thanks in large part to the energy generated by Occupy Wall Street.

It was as if a great tide had lifted the pro-repeal forces in a way you only fully grasped if you were there. Organizers and volunteers had a spring in their step that hadn’t been evident in Wisconsin this summer during the recall elections of nine state senators targeted for their actions during the fight over Governor Scott Walker’s own anti-union law. Nearly everywhere I went in Ohio, people could be counted on to mention two things: the 99 percent -- that is, the gap between the rich and poor -- and the importance of protecting the rights of the cops and firefighters targeted by Kasich's law.

And not just voters or local activists either.  I heard it from union leaders as well. Mary Kay Henry, president of the Service Employees International Union, told me that her union had recruited volunteers from 15 different states for the final get-out-the-vote effort in Ohio. That, she assured me, wouldn't have happened without the energy generated by OWS. And when Henry herself went door-to-door in Ohio to drum up support for repealing SB 5, she said that she could feel its influence in home after home. "Every conversation was in the context of the 99 percent and the 1 percent, this discussion sparked by Occupy Wall Street."

This isn't to take anything away from labor's own accomplishments in Ohio. We Are Ohio, the labor-funded coalition that led the effort, collected nearly 1.3 million signatures this summer to put the repeal of SB 5 on the November ballot.  (They needed just 230,000.) The group outspent its opponents $30 million to $8 million, a nearly four-to-one margin. And in the final days before the November 8th victory, We Are Ohio volunteers knocked on a million doors and made nearly a million phone calls. In the end, a stunning 2.14 million Ohioans voted to repeal SB 5 and only 1.35 million to keep it, a 61 percent to 39 percent margin. There were repeal majorities in 82 of Ohio's 88 counties, support that cut across age, class, race and political ideologies.

Nonetheless, it’s undeniable that a mood change had hit Ohio -- and in a major way. Pro-worker organizers and volunteers benefited from something their peers in Wisconsin lacked: the wind of public opinion at their backs. Polls conducted in the run-up to Ohio's November 8th vote showed large majorities of Ohioans agreeing that income inequality was a problem. What's more, 60 percent of respondents in a Washington Post-ABC poll said the federal government should act to close that gap. Behind those changing numbers was the influence of Occupy Wall Street and other Occupy protests.

So, as the debate rages over what will happen to Occupy Wall Street after its eviction from Zuccotti Park, and some "experts" sneer at OWS and tell it to get real, just direct their attention to Ohio. Kasich's anti-union law might still be on the books if not for the force of OWS. And if the Occupy movement survives Mayor Bloomberg's eviction order and the winter season, if it regroups and adapts to life beyond Zuccotti Park, you can bet it will notch more political victories in 2012.