Will "Homeland" turn into another "The Killing"? 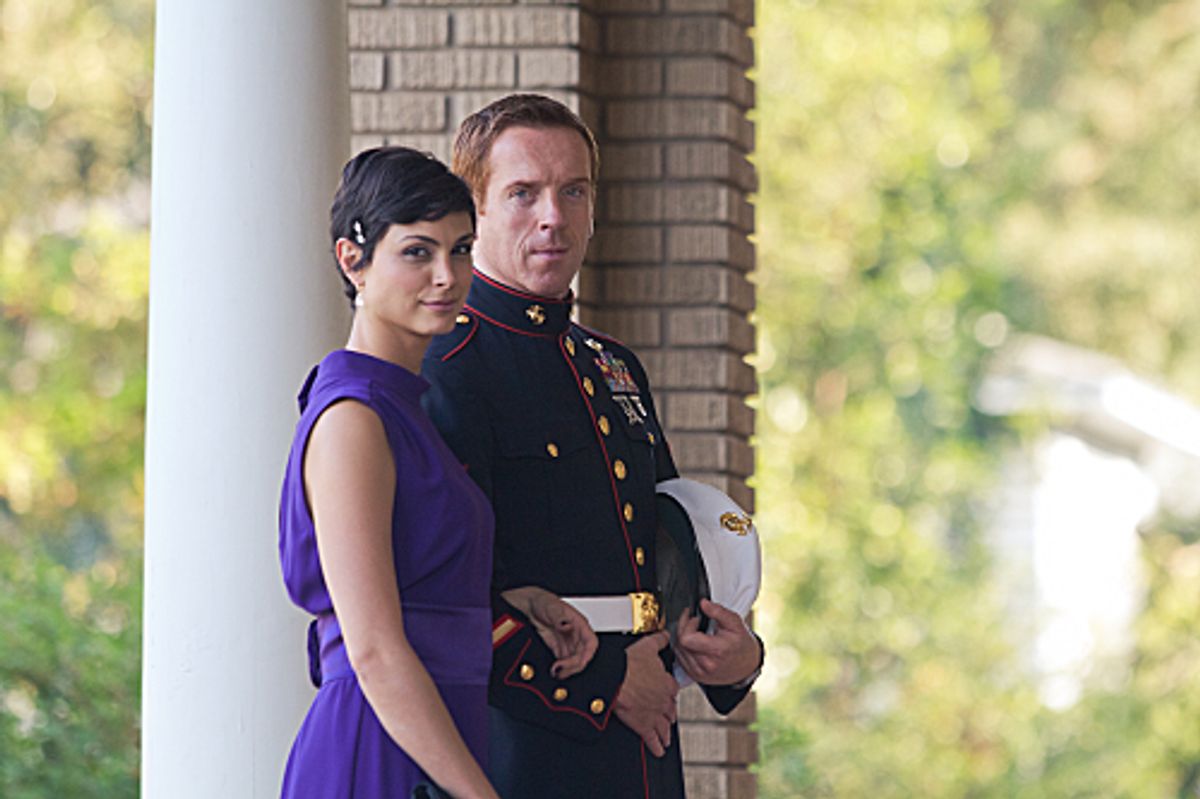 It was probably only a matter of time before the executive producers of "Homeland," Howard Gordon and Alex Gansa, reverted to their roots on Fox's "24," eroding a lot of the goodwill that this show has built up. I've described last week's episode, "The Weekend," as the most perfect hour of TV drama I've seen since the "Mad Men" episode "The Suitcase," and I stand by that rave. Unfortunately, a viewer's endorsement can be undone by problematic twists, and I have a sinking feeling that's what just happened on "Homeland."

The brilliance of "The Weekend" was predicated on the idea that everything we thought we knew about former POW Nick Brody (Damian Lewis) was wrong -- that Brody was not really a pawn of the terrorist Abu Nazir, that he didn't get turned in that Iraqi prison, that he's still loyal to the United States, and that all the seemingly suspicious behavior witnessed by Carrie and her colleagues could be reasonably explained. A lot of people (myself included) assumed, or hoped, that the Carrie-Brody conversation on the porch last week meant that "Homeland" wasn't going to turn into a typical twists-and-turns show, a thriller that sacrifices psychological plausibility on the altar of "surprise." I still hope that turns out to be the case. But the last few minutes of last night's episode, "Achilles Heel," do not bode well.

I am not sure how to read the final scene that occurs after Carrie has told Brody that he didn't beat Walker to death in prison and that he's actually alive -- the fake-out where we think we're going to see Walker in that living room and it turns out to be Brody, and he furiously confronts that man (a handler?) and tells him that he's had it, that the Walker ruse was just too much. "I'm through talking with Nazir, and you can tell him that," Brody said, "Tell him it's over."

It reads like a scene in which a secret agent confronts a puppet master and turns on him; I use the phrase "it reads like" because I don't believe we know exactly who that man is yet. (Do we?) In any event, the scene makes it seem as though Brody is a huge liar -- that he was in fact part of a terrorist conspiracy all along, that the wounded innocence and even cowardice that he revealed to Carrie in the woods is part of what Carrie, in a lucid moment, described as a part of a "long con."

That last scene in "Achilles Heel" raises questions that aren't flattering to "Homeland," whether you read them as indicative of innocence or guilt. If Brody is a brainwashed killer -- part of a larger scheme that also involves Walker -- is it believable that he'd maintain his conditioning after being horribly abused and mistreated for years, then finally lose it because of the Walker deception? Why would that be the last straw and not something else? Could anyone who's been through what Brody has maintain what amounts to an elaborate public and private performance, 24 hours a day? I find the idea of a brainwashed Walker living on the fringe as a homeless person while Brody lives a functional middle-class life (with occasional freak-outs such as the deer shooting incident) much more believable. It doesn't require Walker to maintain a performance, keep secrets from his wife and kids, fool the CIA and the media, etc. Walker just has to do what he's told, keep to himself, bide his time and follow orders.

Of course, it's possible that Walker and Brody are different cogs in the same conspiracy, and that one of these men is intended to distract from (or cover for) the other. But I prefer the idea of Brody as a pawn or patsy or victimized front man -- that the bad guys created him in order to draw attention away from whatever they were actually up to with Walker, or whoever. Farfetched as that might be in real life, for a thriller series it's more credible than any of the alternatives suggested by last night's episode, which included the "Manchurian Candidate"-like twist of Brody being groomed to take the place of a congressman who's resigning in the wake of a sex scandal. I don't believe that any power brokers, no matter how opportunistic or evil, would think that an emotionally volatile former POW with no political experience would be a good candidate for national office. Brody shot a deer during a party. There were witnesses. (I also didn't believe that long action sequence with FBI tactical units chasing Walker and accidentally killing a couple of Muslims in a mosque. Since killing Walker would be counterproductive, would the troopers really be using live ammo, as opposed to tranquilizer dart guns or nets or rubber bullets or some other non-lethal weapon? And wouldn't at least one of the people guiding their actions back in the situation room have an eye on Google maps, and warn them via headset, "Be extra careful in there, guys"? But that's more of a technical adviser issue than a failure or betrayal at the plot level.)

I suppose you could defend what happened in "Achilles Heel" on meta-fictional grounds -- meaning that the narrative game "Homeland" is playing with the audience mirrors whatever game that Brody the deceiver is playing with Carrie and the whole national security state; that what we've been watching on "Homeland" is a kind of double-secret-reverse fake-out in which mysterious Brody convinces us he's not the sort of character we naturally assume he is, the better to disguise the fact that he actually is what we feared he was, and protect whatever evil scheme that he's a part of.

The game-lover in me likes the idea that my desire to have "Homeland" turn out to be something other than a typical twist-driven thriller is my own Achilles heel as a viewer, and the show exploited it. If that turns out to be the case, it'll be a testament to Damian Lewis' depth, skill and sympathetic face. Only a good actor could make me disregard my own conditioning as a thriller fan and think, "Hey, I guess Carrie had it wrong -- Brody is not a terrorist, he's just damaged and misunderstood." And to be fair, it's unlikely that a 13-episode series would have revealed most of its trump cards at the halfway point; since this is a thriller, there have to be more twists. But if a show goes too far in that direction -- revealing that, say, Carrie or Saul are the real sleeper agents, twists that I really hope are not on deck -- it'll turn "Homeland" into a smaller, quieter "24," a cartoon in which you can't trust anybody or anything. Or worse, it'll become "The Killing," which started out as a realistic account of a single murder investigation and got stupider and more arbitrary by the week.

If this does turn out to be the central triumph of "Homeland" -- using strong writing and acting to fool viewers into thinking it's not just another shameless TV thriller -- it'll be a Pyrrhic victory at best.