The Penn State coach shouldn't be held responsible for the crimes of others, collective punishment advocate says 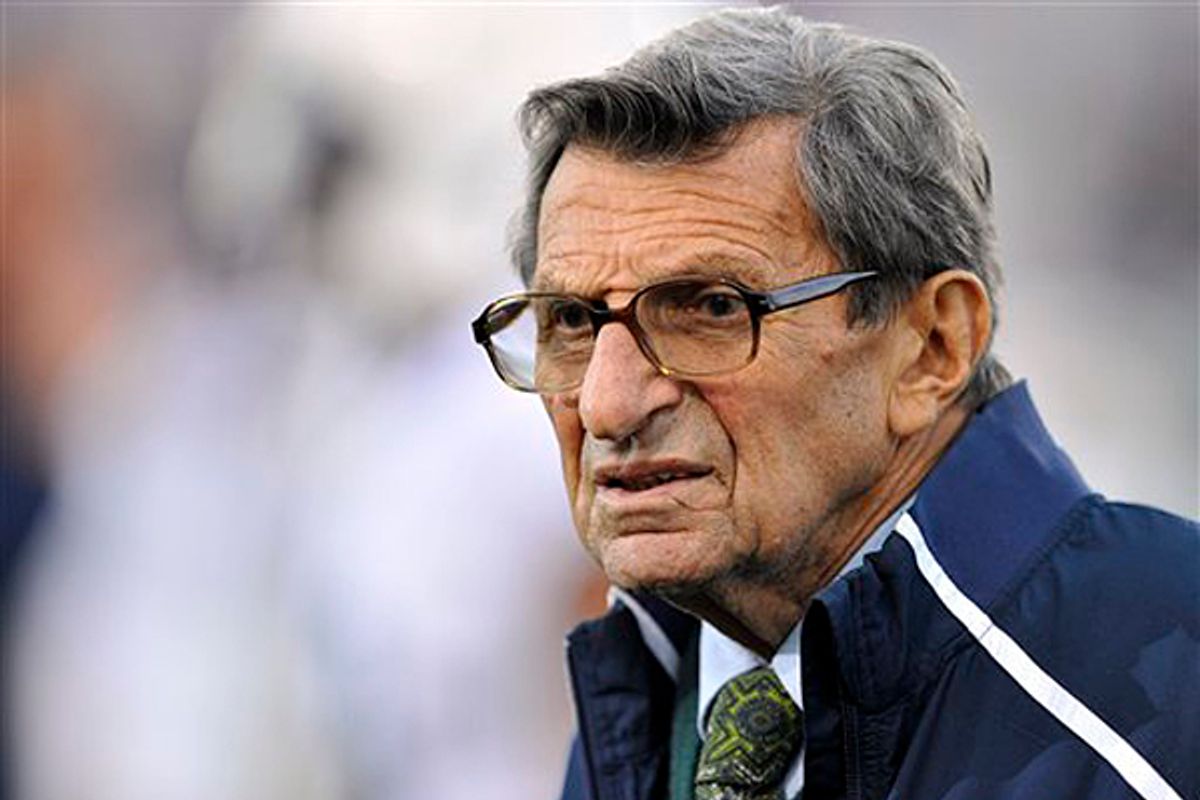 Finally, legal scholar Alan Dershowitz has weighed in on the firing of longtime Penn State football coach Joe Paterno. It is practically a crime that we had to wait this long to hear what "The Dersh" has to say about the largely peripheral figure whose totally justified firing has subsumed most coverage of the horrific crimes alleged to have taken place under his watch. Here's Dershowitz's take: JoePa was treated unfairly, and he shouldn't be held responsible for crimes committed by his underling and covered up by his superiors.

Dershowitz's Harvard Legal Ethics class had a little debate about the Penn State situation. They all agree that Paterno had no legal obligation to do anything after assistant coach Mike McQueary told Paterno that he saw defensive coordinator Jerry Sandusky raping children in the locker room shower. But what about his moral obligations?

Some take the view that Penn State is a rigidly hierarchical organization, and that in such an organization, it is sufficient to report to one's superior. Others point out that the Catholic Church too, is a hierarchical organization, and when priests reported abuse to their bishops and the bishops reported the abuse up the hierarchy, the problem persisted. Yet others take the view that if Penn State is a hierarchy like the Vatican, then Paterno was "the Pope," and the buck stopped with him. He, not his superiors, was the person responsible for reporting the episode to the police. That seems unfair in light of the fact that popes can't be fired, and yet Paterno was discarded like a bag of putrid garbage, when it served the interests of the Board of Directors to distance themselves from him.

Emphasis mine, because that bit indicates where Dershowitz's sympathies are. Poor JoePa, tossed out like "putrid garbage." Then Dersh's argument gets weirder: Turns out, Paterno's inaction was a result of the anti-"snitch" culture of old people.

There is another factor, which may explain, if not justify, Paterno's limited actions in going only to his immediate superior. Paterno and I come from roughly the same generation. We grew up during the period of McCarthyism, and my parents taught me, as his parents may well have taught him, that the most unforgivable sin is to "snitch" on one's friends and colleagues. Being called a "snitch" was just about the worst thing anybody could say about someone who grew up in the 1940s and 1950s.

Hah, what? McCarthyism? Paterno's parents probably told their child never to "name names" when called before the House Un-American Activities Committee, that surely explains why he didn't go to the police.

Dershowitz's class -- snitches, all of them -- basically agree that Paterno had a moral obligation to see to it that Sandusky actually went to jail instead of merely being told he could rape children on his own time, as long as it didn't happen in Penn State's locker room.

I think the consensus of the class was that regardless of what the law did or did not require, Paterno should have done more than simply report to his superior and wash his hands of the matter -- if, in fact, that's all he did. As the moral leader of Penn State athletics, he should have served as a role model for the current generation of students and athletics. At the very least, he should have followed up to see whether the school had done enough to avoid a recurrence.

What a reasonable consensus, class. Your professor, though, feels differently. He feels bad for the real victim in all of this, the old guy with enough money to retire quite comfortably: "I believe, and here I'm speaking for myself and not my students, that, on the basis of the information now in the public sphere, Paterno was treated unfairly by the Penn Board."

I think it should be remembered that Paterno is totally fine. He's not in a jail cell or living in abject poverty, shunned by society. All that happened is that he got fired, for his role in a large organization's self-serving coverup of criminal activity. He knew Sandusky had abused children, and after reporting this to his superior, he watched in total silence as Sandusky remained a free man who was allowed to continue bringing kids to a summer camp at a Penn State campus, for years. Even if his inaction was understandable -- we are all human, I get that -- it still seems eminently worthy of punishment.

Given the nature of the crimes alleged and the fact that said crimes went unpunished even though they were known to so many authorities at Penn State, I figured Dershowitz would argue that that the United States should announce to Penn State that they have 24 to abandon their campus before our tanks and bulldozers roll in, but apparently he only assigns collective guilt to ... certain peoples.