Can the formerly famous puppet gang save their theater from an oilman? They\'ll have to put on a show! 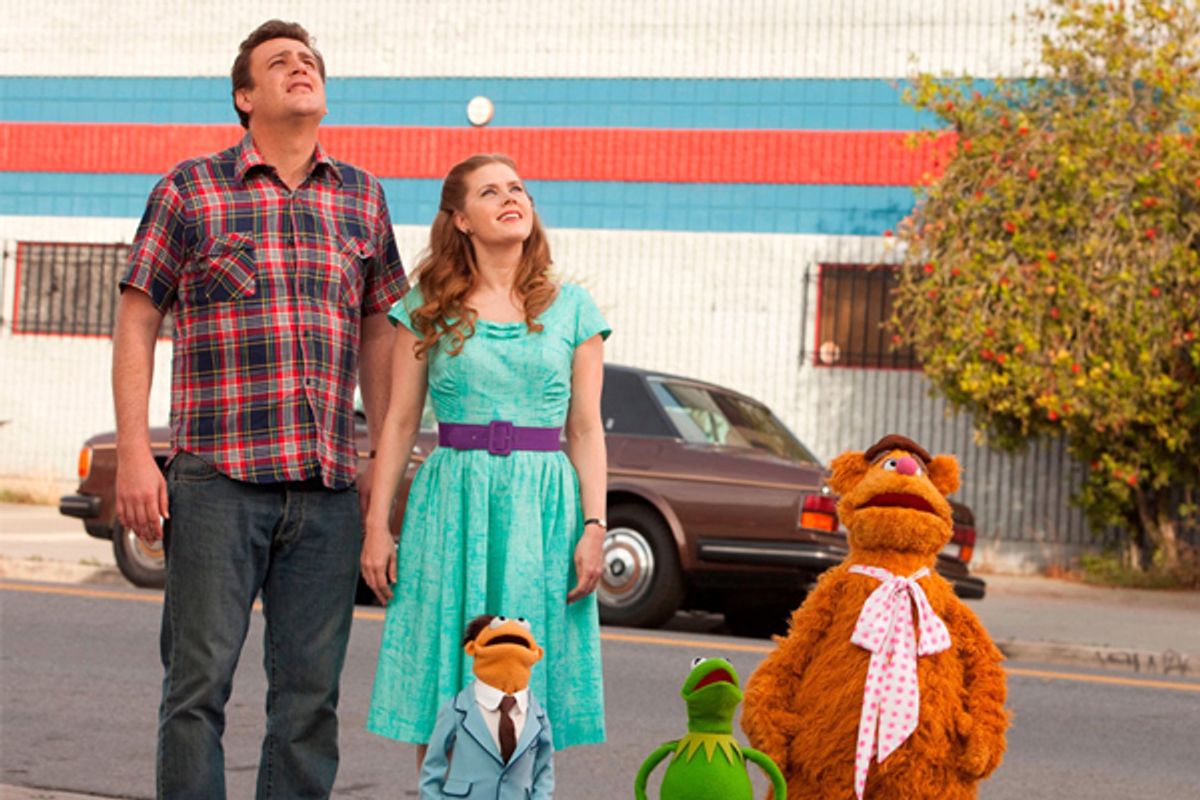 I really wasn't prepared for the moment in "The Muppets" when Kermit and Miss Piggy end their silly, diva-flavored squabbling and join forces to sing a duet of "The Rainbow Connection." Oh, I was thoroughly enjoying myself, cackling along at all the 1980s in-jokes, reveling in Jason Segel and Amy Adams' ultra-square musical numbers (which are honestly no kitschier than, say, the ones in "The Music Man") and explaining some of the nostalgic references to my kids: "Yeah, the big bear in the hat. He's called Fozzie. He's not funny on purpose. And, see, he was already a cultural reference to something called the Borscht Belt, that people my age didn't get when we were kids. But ... uh -- hey, there's Kermit! We love Kermit!"

This slight but thoroughly charming family flick is, as they say, a delight for all ages. No matter who you're taking to the movies, and even if you're going by yourself, you can't go wrong with this one. Director James Bobin's modest reinvention of the Muppet franchise blends the low-tech puppeteering style of the late Jim Henson with some tremendously fun old-school song-and-dance numbers. It bumbles along episodically from one thing to the next -- hey-ho! -- and captures the spirit of Henson's "Muppet Show" admirably, meaning that its core audience is probably adults in their 30s and 40s, but it'll also be terrific for little kids and grandmothers.

I'm being completely sincere -- and entirely complimentary! -- when I say that "The Muppets" represents a career high point for Segel, the comedian who reveals himself to be a whimsical writer, capable singer and dancer and appealing straight man. He co-wrote the screenplay (with Nicholas Stoller) and stars as Gary, a human Muppet fan who helps Kermit and pals take on an evil oilman named Tex Richman (Chris Cooper), who wants to destroy the Muppets' now-decrepit L.A. theater and drill for black gold. "Maniacal laugh! Maniacal laugh!" intones Tex to Uncle Deadly and Bobo the Bear, a pair of minor Muppets he has tentatively turned to the dark side.

"The Muppets" begins as a mock small-town musical, with Segel's Gary and Adams' Mary as an utterly chaste, not-quite-engaged couple planning a West Coast vacation along with Gary's younger brother, Walter. Who is, let's just say, different from other people in Smalltown. No, Walter's not gay (although he's not not gay either) -- he's made of felt and stuffing, and is less than three feet tall. Once in L.A., this threesome discovers the sad truth that the Muppets' legendary theater is falling apart, and the studio tours (led by Alan Arkin) consist entirely of viewing the storage room for ropes and wires. Kermit is living in seclusion in the Hollywood hills, and can see no way of rescuing the theater from Tex Richman's depraved scheme. It would take $10 million to buy the thing back, and where are they going to get that kind of money? Except maybe through doing something silly, like putting on a show.

So begins the project of getting the old gang back together, which lopes through a series of genial gags, some of which work better than others. Miss Piggy is now an editor at Paris Vogue (mais oui!), a setup that should deliver comedy gold but somehow doesn't. On the other hand, Fozzie Bear is now heading a dreadful "tribute act" called the Moopets at a third-rate casino in Reno, co-starring an abusive pig named Miss Poogy who does not appear to be female. Eventually someone suggests collecting the rest of the characters "by montage," which definitely saves time, and traveling to France in Kermit's dingy, mid-'80s Rolls "by map." Come on, you know exactly what that means: A cheap animation of the globe, with a line chugging from L.A. to Paris.

If I'm making it sound like the humor in "The Muppets" verges on the mean or the overly knowing, it totally doesn't. Segel and (especially) Adams make an adorably wholesome pair of leads, and the mild self-mockery of the whole enterprise is very much in the Henson spirit. (I'm still not quite used to hearing Steve Whitmire's voice as Kermit instead of Henson's, but in fairness, he's been doing it for 20 years. The other voice talent is mostly second-generation Muppeteers, although Dave Goelz, who voices Gonzo, Dr. Bunsen Honeydew and others, goes back to the early days.) Celebrity cameos are almost too numerous to mention, including Jack Black as a rage counselor, Sarah Silverman as a diner waitress, Whoopi Goldberg, Neil Patrick Harris, Emily Blunt, Dave Grohl, Selena Gomez and so on.

On balance, I think that the overly clunky conclusion cooked up by the writers and/or Bobin could have used a more elegant rewrite. My kids left the movie mildly confused: Had the Muppets actually raised the money to buy back the theater from Tex Richman? And if not, why not? And what had happened instead to make everything all right? But the show the Muppets actually put on, to bring people laughter -- the third-best gift of all time, we are told, after children and ice cream -- is pure delight. And there was I, sitting in a Manhattan theater between two 7-year-olds, watching a pair of puppets from a decades-old TV show pretend to sing a song about rainbows, with tears streaming down my face.

Movies Our Picks The Muppets