If Romney is the GOP nominee, Democrats might do well to learn from a mistake Ted Kennedy made in 1994 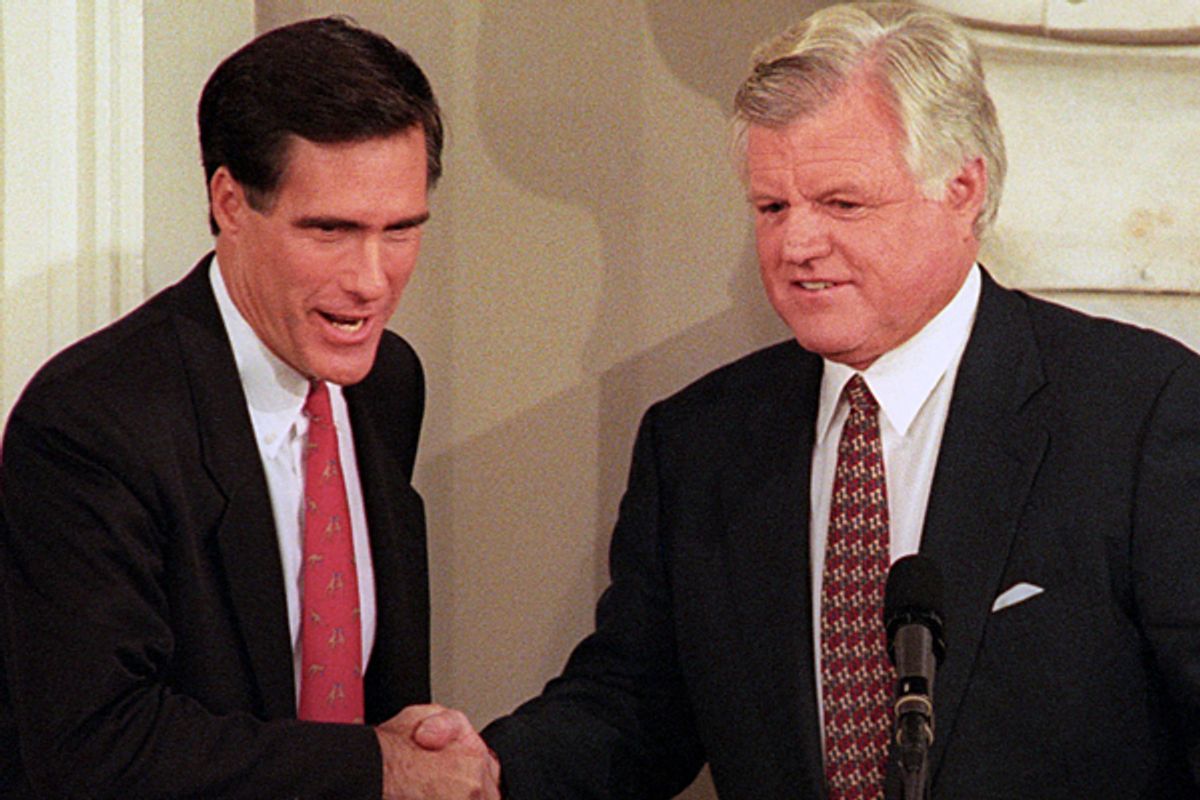 Democratic Senator Ted Kennedy (R) and his Republican challenger Mitt Romney shake hands at the start of their first debate of the campaign for the US Senate at Boston's Faneuil Hall on October 25, 1994. (Reuters)
--

The Washington Post's Jason Horowitz has written a fascinating account of Mitt Romney's work in the 1980s and early 1990s as one of the Mormon church's top leaders in Boston. As my Salon colleague Justin Elliott (who has done his share of reporting on Romney's past) pointed out earlier today, the Post story and other previously reported details from the '80s and '90s "paint a portrait of Romney as an enforcer of the most socially conservative policies of the LDS church." Elliott has a complete run-down of what's out there.

A logical question is whether the Obama campaign and its allies will play any of this up if Romney emerges as the Republican nominee. The Post story, for instance, depicts a young Romney chastising a middle-aged woman for divorcing and reminding her that premarital sex is a violation of church doctrine. This is the sort of anecdote with the potential to unnerve swing voters, and there might be a temptation for Obama and the Democrats to insert it (and other similar anecdotes) into the general election campaign.

But there's a cautionary tale they might first consider.

It comes from 1994, when Romney waged his first political campaign, for Ted Kennedy's U.S. Senate seat. Kennedy was unusually vulnerable that year; the William Kennedy Smith rape trial had badly damaged his image and Republicans were poised to make sweeping midterm gains across the country. ('94 remains the last time that Massachusetts voters sent any Republicans to the U.S. House.) When Romney brushed off his nuisance opponent (John Lakian) in the September GOP primary, a poll showed him leading Kennedy by two points -- the first time the six-term senator had ever trailed a general election foe in a poll.

Kennedy's campaign responded by deputizing then-Rep. Joe Kennedy, Ted's nephew, to play the attack dog role. Joe Kennedy immediately zeroed in on the social conservatism of the Mormon church, telling the press that "I believe very strongly in the separation between church and state, but I think that if a particular church has a belief that blacks are second-class citizens, and that's the stated belief of the church, or that women are second-class citizens, I mean you ought to take a look at those issues." (The LDS had actually begun allowing black men to serve in leadership positions in 1978.)

His remarks set off a controversy that dominated the campaign for the next week, with Romney accusing his rival's campaign of religious bigotry and branding Joe Kennedy's comments a betrayal of the legacy of John F. Kennedy, who had famously appealed for tolerance of his own Catholic faith in his 1960 presidential campaign. "In my view," Romney said, "the victory that John Kennedy won was not for just 40 million Americans who were born Catholic -- it was for all Americans of all faiths. And I'm sad to say that Ted Kennedy is trying to take away his brother's victory."

He also professed his love for his own church and claimed that the day the prohibition on blacks serving in leadership roles had been lifted was one of the happiest he could remember.

The Kennedy campaign refused to disavow Joe Kennedy's comments, although the senator reportedly received a furious phone call from Orrin Hatch, a Mormon who was one of his best friends in the Senate. The whole episode was a clear loser for the Democrat, with most press stories treating Romney sympathetically. It was also a major distraction, preventing the Kennedy campaign's efforts to attack Romney on other fronts. Eventually, Joe Kennedy phoned Romney to apologize, then released a letter to the Boston Globe in which he claimed to "deeply regret" his remarks. But the Romney campaign took that letter as a backdoor effort to keep the attacks alive. As the Globe reported at the time:

In the letter, Kennedy said he traveled as a youth in the western United States and developed friendships with many Mormons. He said he respected the Mormon Church for its emphasis on family values but "came to share the concerns of some of my Mormon friends about their church's doctrine and policy on matters of race and gender."

Kennedy noted the church's policy of not allowing blacks to become priests even though other males are eligible for the priesthood at age 12.

Kennedy also made reference to a Globe story last summer in which a woman said Romney, then a counselor for the church, had advised her to give up for adoption a child conceived out of wedlock or face excommunication. "With this in mind, I recently made comments that implied that I believe the Mormon Church continues to pursue intolerant policies," Kennedy said in his letter.

"Since my remarks, Mr. Romney and others have pointed out that in 1978 the president of the Mormon Church, by revelation, changed the official position of the Mormon Church to permit blacks to hold the priesthood - giving blacks equal status with all other males," Kennedy said. "I was not aware of the change. I deeply regret my remarks."

Romney's campaign responded with this statement:

At first, we thought Kennedy's 20-minute call to apologize to Mitt was a private and apologetic matter. Now it's obvious it's just another sleazy campaign trick by the Kennedy people to try to attack Mitt's faith once again. I'd say Joe Kennedy was the sleaziest politician in Massachusetts but, if his uncle approved this stunt, then Joe is only second."

That was the end of it, though, and the Kennedys spent the final six weeks of the campaign ignoring Romney's religion and focusing their attacks on his work with Bain Capital. By the middle of October, Kennedy had opened a commanding lead in polling, and he didn't look back, winning by 17 points.

Granted, the way Joe Kennedy went about making the Mormon church's social conservatism an issue was particularly blunt and inartful. Presumably, the Obama campaign could find a craftier way to do it, raising questions about Romney's own actions without having it seem like an assault on his church. But the real lesson of Kennedy's botched attack is probably that the intersection of personal faith and politics is a dangerous place to wage a negative campaign. So for the Obama campaign, the question to consider might be: Why even go down that road -- especially when there's ample material to attack Romney on that has nothing to do with religion?