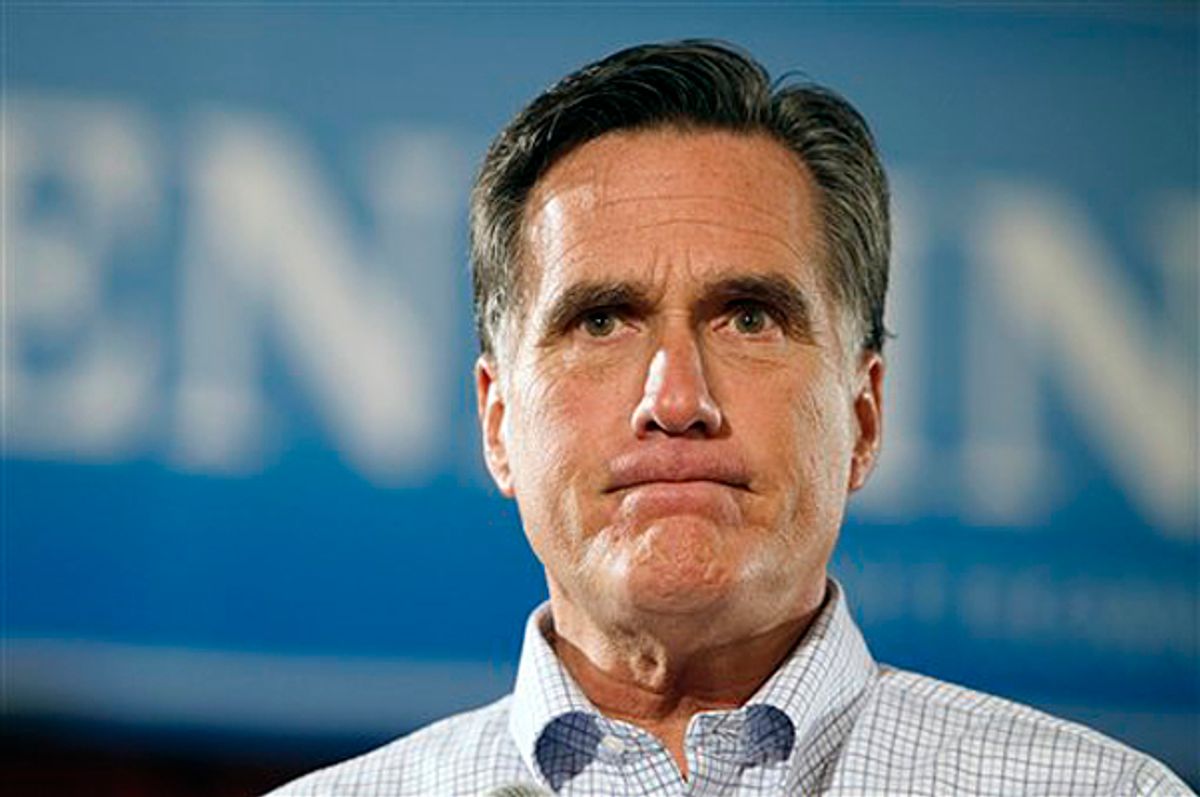 There's actually plenty of good news for Mitt Romney in a new national poll released by Quinnipiac University this morning, even though it has him trailing Newt Gingrich in the GOP presidential race by a 26-22 percent margin.

For one thing, the survey shows that Romney is very well-liked by Republican primary voters. Fifty-eight percent of them say they have a favorable view of him, with only 15 percent expressing an unfavorable opinion. Gingrich fares slightly better in this regard -- a 64/10 favorable rating among Republicans -- but it's not like a massive chunk of the GOP universe actively dislikes Romney. Plus, Republicans seem to recognize that Romney is their most electable option; by a 38-23 percent spread they say that he -- and not Gingrich -- is best positioned to defeat Obama. And fully 52 percent of Republicans say they expect Romney to be their nominee, compared to only 19 percent for Gingrich.

All of this bolsters the view that Romney is poised to follow the path to the GOP nomination that John McCain took four years ago -- narrow but crucial wins in the key early contests that will quickly thin the field and lead Republicans who spent all of 2011 resisting him to shrug their shoulders and climb on board.

McCain, it's worth remembering, was averaging about 20 percent in national polling on the eve of the January 2008 Iowa caucuses; but he scored a victory of sorts in Iowa (where his chief rival, exceeding expectations himself, Romney, suffered a humbling defeat to Mike Huckabee), then won New Hampshire, South Carolina and Florida. His margins in these states weren't impressive -- his peak performance was 36 percent in the Granite State -- but victories are victories and McCain emerged with the momentum he needed to land a knockout blow against Romney on Super Tuesday.

Romney's 2012 story could play out the same way. Nothing in the new Quinnipiac numbers suggests that Republicans are absolutely opposed to nominating him, and polls show him well-positioned in New Hampshire and very much in contention in Iowa and Florida (while facing a more problematic situation in South Carolina). As McCain demonstrated, winning most of those states even with modest pluralities would probably get the job done for Mitt.

That said, there are some numbers in the new Quinnipiac poll that probably should worry Romney. The big one is the head-to-head match-up between him and Gingrich, which shows the former House speaker leading Romney by 10 points, 49 to 39 percent. This shows that, at least for now, Gingrich also doesn't have a ceiling -- meaning that if he could break through with some early wins, momentum might build behind him. The Tea Party/non-Tea Party divide is also striking. Among Tea Partyers, Gingrich crushes Romney in a one-on-one race, 68-25 percent; among non-Tea Partyers, it's much closer, but Gingrich still holds the edge, 46-43.

Now, there are lots of reasons to suspect that Gingrich will soon plummet back to earth -- just as Herman Cain is now doing and just as Rick Perry and Michele Bachmann did before. The fact that he's not really been treated as a real candidate by his rivals and the press (no attacks on him in debates, no rough follow-up questions) suggests Gingrich's current numbers may be artificial. And now that he's risen to the top in polling, this is already starting to change, and he may be in for some rough treatment at tonight's debate. That Newt has so many self-destructive tendencies makes the possibility of a meltdown all the more real.

Still, it's hard not to look at all of the recent data and think back to the 2010 midterm campaign, when Republican primary voters in several key statewide contests willingly nominated untested outsiders even though it was obvious that doing so would risk a general election defeat for the party. You can dismiss the stories of Christine O'Donnell, Ken Buck, Sharron Angle and Joe Miller as quirky flukes, but when polls show Newt Gingrich opening a double-digit lead over Mitt Romney just over a month before Iowa, it's worth wondering if their primary wins might actually have been foreshadowing something much bigger and much more improbable on the national stage.