The indie star is wondrous, sexy and sweet as doomed screen goddess Marilyn Monroe in a lightweight British comedy 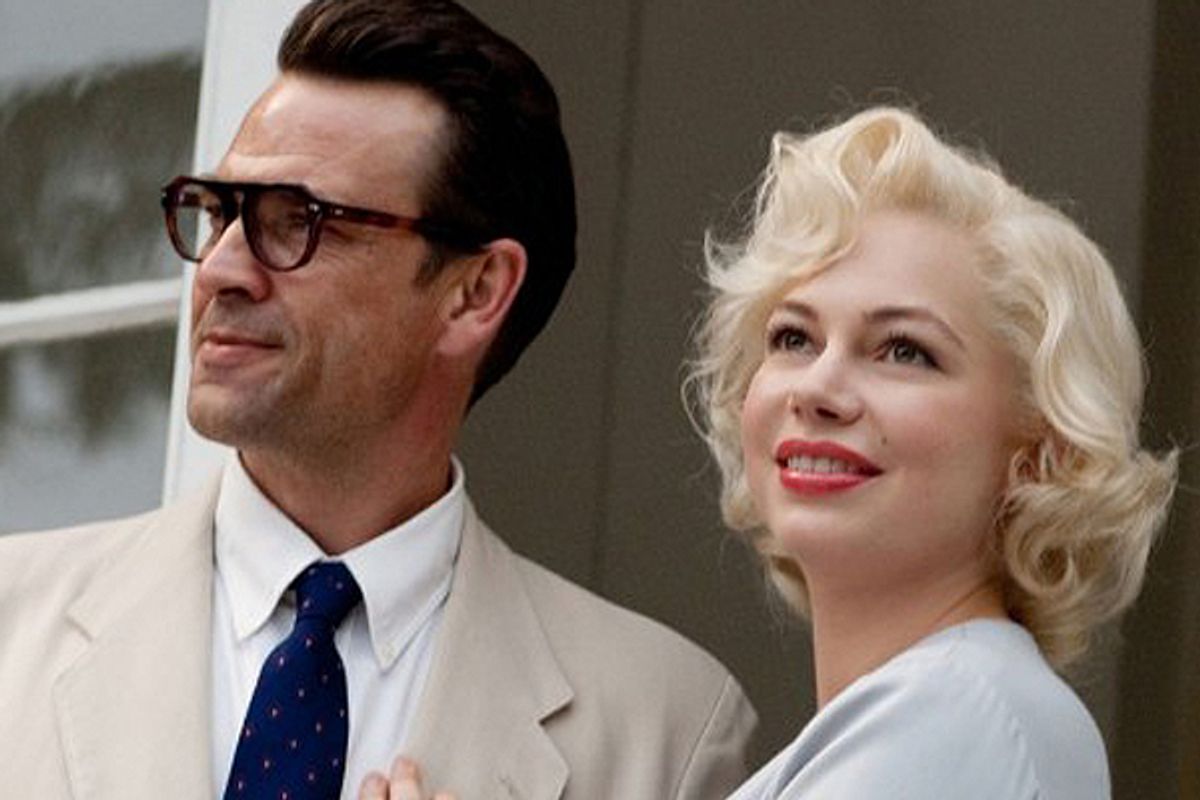 Dougray Scott and Michelle Williams in "My Week with Marilyn"
--

We're about halfway through the stagey, enjoyable behind-the-scenes comedy "My Week With Marilyn" when we hear Kenneth Branagh, playing Laurence Olivier, raging about his costar in the 1957 mishmash "The Prince and the Showgirl." Teaching Marilyn Monroe how to act, sputters Branagh-as-Olivier, is "like teaching Urdu to a badger." It's a funny line, albeit loaded with the imperial condescension Sir Larry evidently felt for the American girl from nowheresville who held the whole world in thrall. But as even Olivier would eventually admit, some badgers just know how to communicate, with or without language instruction.

Most of the chatter around "My Week With Marilyn" will inevitably concern Michelle Williams' magnetic Oscar-bait performance as the off-screen Monroe, and my only two words on that subject are yes and yes. (Yes, she's wonderful and yes, she'll probably win, although I'm still pulling for Ellen Barkin or Kirsten Dunst.) But this film adapted from the memoirs of one-time Olivier assistant Colin Clark also does the service of reminding us that Marilyn Monroe was something more than the Kim Kardashian of her day. She drove Olivier nuts precisely because she had no idea what she was doing as an actress and lacked the kind of discipline and work ethic on which theater-trained actors like him relied -- and because in scene after scene in that movie, she blew him away.

As we see her here (and by all accounts this is pretty true to life) Monroe could utterly butcher her lines on the first take, space out and suffer a minor panic attack on the second, and then deliver a perfect, funny, sexy, ingratiating reading on the third, the sort of thing that convinced the audience she was on their side, even playing in a sub-mediocre transatlantic comedy opposite a slumming Shakespearean. Playing to the camera like that was simply not something that Olivier, one of the greatest actors in the history of British theater, was capable of doing. As Branagh plays Olivier, he feels superior to Monroe, superior to the material, and generally insulted by the whole experience. Yet he's also bitterly aware that even amid her apparent terror and incompetence, Monroe can illuminate the frame, leaving him standing there like an item of spare furniture doing an atrocious Dracula accent. (I'm tempted to accuse Branagh of camping it up in this odd, meta-actorly performance -- one great Shakespeare actor playing another -- except that I'm not sure one can camp up Laurence Olivier quite enough.)

"My Week With Marilyn" is the kind of shtick-laden movie in the British TV mode that delivers all its laughs, and all its grand, declamatory moments, right on schedule. I'm delighted to recommend it, as long as you know what you're in for: "The King's Speech" has the subtlety of Chekhov in comparison. Everyone in the supporting cast seems to have worked really hard on his or her accent and is overly proud to show it off, perhaps to conceal that every single aspect of the story is both familiar and predictable. Even when you've got Americans playing Americans (Zoë Wanamaker as Monroe's acting coach, Paula Strasberg) or Brits playing Brits (Julia Ormond as Vivien Leigh, Olivier's wife at the time) there's a thick, greasy coating of histrionics. And then you get a whole parade of overconfident British actors doing exaggerated Noo Yawk accents that suggest Rodney Dangerfield topped with gefilte fish: Toby Jones as Monroe's agent, Arthur Jacobs; Dominic Cooper as photographer-turned-producer Milton Greene; and Dougray Scott, doing a splendid Arthur Miller as long as he keeps his mouth shut. Sure, this is a British production, and that's great. But they couldn't get an actual New York actor to play Arthur freakin' Miller?

Against that backdrop we get the thoroughly winning, borderline-apocryphal fable of the almost-romance that developed during the summer 1956 shoot of "Showgirl" between Colin Clark (Eddie Redmayne), a wide-eyed, upper-crust college grad who had latched onto Olivier, and the Western world's most famous star. According to Vivien Leigh, Olivier arrived on set as both star and director expecting to seduce Monroe, but their relationship turned sour almost immediately. Monroe hid in her dressing room or her rented Surrey mansion, Olivier fumed, and the handsome, gawky Clark was deputized to be their go-between. There's really no one left alive to testify to the intimate details of Clark's relationship with Monroe, but by his account he served mainly as her pal and confidant after Miller fled back to America. Were they lovers? The film doesn't directly answer that, and I get the feeling that the answer depends on what you think the question means.

I'm a huge admirer of Michelle Williams, but I'm used to seeing her play indie-film characters who sleep in their cars or brave the Oregon Trail. In the abstract I wouldn't have assumed she had either the physicality or the luminosity to pull off Marilyn Monroe. But from her thoroughly delectable opening number, her performance is relaxed, natural and utterly captivating, capturing Monroe's precise blend of innocence and eroticism. You could say that the character Williams develops is rootless and uncentered, but one suspects that was true of Marilyn in real life, vacillating between the public sex-symbol persona that threatened to swallow her and the uncertain girl from a messed-up family who was plagued by anxieties and the threat of mental illness.

You can see why she liked Clark, who in Redmayne's portrayal is supremely smitten, utterly guileless and thoroughly English, three things Arthur Miller -- who was clearly having second thoughts about his celebrity spouse -- certainly was not. She goes skinny-dipping in a pond at Oxford, in blatant violation of that ancient establishment's rules, and thrills the university's service workers by descending a staircase in full Marilyn mode. "Shall I be her?" she purrs to Colin, before striking poses and blowing kisses. As the world would soon find out, the performance of being Marilyn Monroe was too much for her. The performance of being a charming English boy's pretend girlfriend for a week may have been a welcome respite, or at least it's nice to think so.