Gingrich has taken money from everyone from Big Pharma to Freddie Mac. How is he leading the Republican pool? 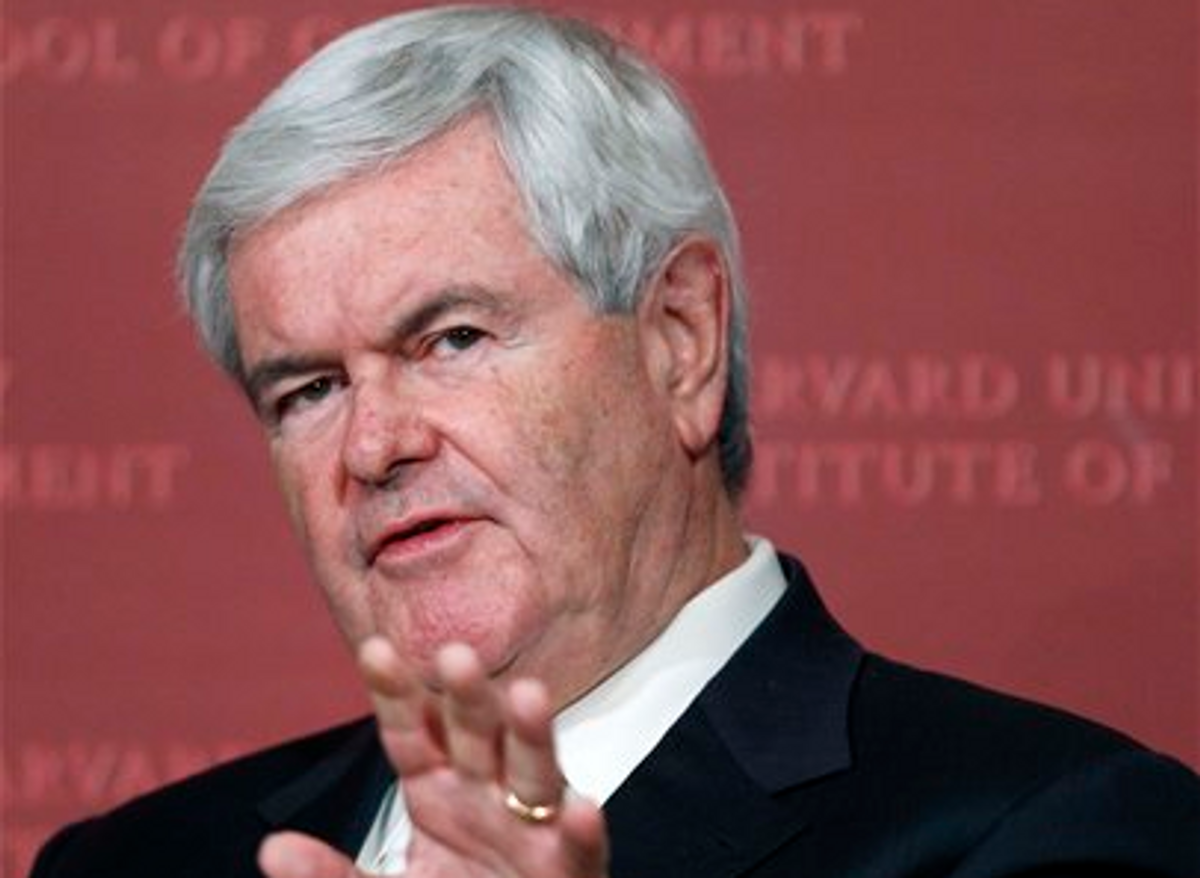 You maybe should think twice when even Jack Abramoff thinks you’re beneath contempt. Not that Newt Gingrich cares.

Abramoff, America’s favorite convicted influence peddler, told NBC’s David Gregory that presidential candidate and former Speaker of the House Gingrich is one of those “people who came to Washington, who had public service, and they cash in on it. They use their public service and access to make money.”

Newt, he continued, is “engaged in the exact kind of corruption that America disdains. The very things that anger the Tea Party movement and the Occupy Wall Street movement and everybody who is not in a movement and watches Washington and says why are these guys getting all this money, why do they go become so rich, why do they have these advantages?”

Why indeed? Granted, Abramoff’s in the middle of his promotion tour of confession and attempted redemption, a pot obscenely eager to call his kettle and former mentor black – especially if it sells books. But Casino Jack does have a point.

Gingrich personifies everything rotten about the ATM machine we call Washington: the merchandising of favors and votes; the conversion of past incumbency into insider information, making your contacts and the ability to play the system available to the highest bidder; the archetypal revolving door between government service and shilling for corporate America.

Yet there he is, suddenly riding at the top of the polls, his debate skills lauded, his churlish dismissal of the media praised, and infused with sufficient cheek to portray himself to gullible elements of the electorate as an outsider. It’s as if Kim Kardashian proclaimed herself American Housewife of the Year.

(Gingrich now is trying to play the inside-outside game both ways, proclaiming last week, “We just tried four years of amateur ignorance and it didn’t work very well. So having someone who actually knows Washington might be a really good thing.”)

In fact, a quick look at just a few of Newt’s activities since his GOP colleagues tossed him out of the speakership in 1998 is sufficient to expose him as the ultimate poster boy for inside-the-Beltway game playing -- adherence to ideology often shoved aside in favor of expedience and the chance to make a buck.

You’ll remember hearing just this past spring about Mr. and Mrs. Gingrich’s revolving, no-interest credit line at Tiffany’s, a luxury store they treated like a diamond encrusted version of the Home Shopping Network, and Tim Carney’s report in the Washington Examiner that, "Christy Evans, formerly a top staffer to ... Gingrich, is a registered lobbyist for Tiffany's.”

Now Carney writes, “We know that Gingrich has been paid by drug companies and by the drug lobby, notably during the Medicare drug debate. A former employee of the Pharmaceutical Research and Manufacturers of America (the main industry lobby) told me Gingrich was being paid by someone in the industry at the time. A spokeswoman for Gingrich's healthcare consulting firm, Center for Health Transformation, told me that drug companies have been CHT clients. PhRMA confirmed in a statement that they had paid Gingrich. Bloomberg News cited sources from leading drug companies AstraZeneca and Pfizer saying that those companies had also hired Gingrich…

“Three former Republican congressional staffers told me that Gingrich was calling around Capitol Hill and visiting Republican congressmen in 2003 in an effort to convince conservatives to support a bill expanding Medicare to include prescription-drug subsidies. Conservatives were understandably wary about expanding a Lyndon Johnson-created entitlement that had historically blown way past official budget estimates. Drug makers, on the other hand, were positively giddy about securing a new pipeline of government cash to pad their already breathtaking profit margins.”

On Monday, the chair of Gingrich’s Center for Health Transformation estimated its revenues over the past decade at $55 million. Fees are flexible, she said, with “charter memberships” going for an annual fee of $200,000. According to the Nov. 21 Wall Street Journal, “The health think tank also charges for consulting sessions with the former speaker and Mr. Gingrich’s speeches, according to two health care trade groups.”

More dynamically, the center’s P.R. materials promised “direct Newt interaction”(!) and as per the Washington Post, “The biggest funders, including such firms as AstraZeneca, Blue Cross Blue Shield and Novo Nordisk, were also eligible to receive discounts on ‘products and workshops’ from other Gingrich groups.” Sounds like the Potomac edition of “The Price Is Right.”

Another Center for Health Transformation charter member was Gundersen Lutheran Health System of La Crosse, Wis. The Nov. 17 New York Times reported that in July 2009, without reporting his connection, Gingrich praised the company in the Washington Post “for its successful efforts to persuade most patients to have ‘advance directives,’ saying that if Medicare had followed Gundersen’s lead on end-of-life care and other practices, it would ‘save more than $33 billion a year.’”

Advance directives means helping families determine future care for the terminally ill, but when Tea Partyers and others started yelling about “death panels” during the healthcare reform fight, Gingrich made a quick flip-flop to the right and changed sides.

Listening to Newt attack child labor laws this week, I thought one of his clients might be Miss Hannigan’s Orphanage. In reality, others who have anted up for his advice include GE, IBM, Microsoft, Growth Energy (a pro-ethanol lobby group that between 2009 and 2011 paid him $575,000) and the U.S. Chamber of Commerce. The Wall Street Journal notes that, “The Chamber, the largest lobbying organization in Washington, paid Mr. Gingrich about $840,000, according to people familiar with the arrangement, or about $120,000 a year for seven years, beginning in 2001, to serve on an informal board of advisers to its president and senior staff.”

And then, of course, there’s Freddie Mac, which triggered this recent tsunami of scrutiny when Gingrich claimed at the Nov. 9 candidates’ debate that it was for his expertise as an historian that the home mortgage giant had paid him $300,000. Bloomberg News then reported that the number was actually as much as $1.8 million, paid as consulting fees right up until 2008, when the failing agency was taken over by the government and such outside contracts were suspended. Gingrich claims he warned Freddie about “insane” loans and then told USA Today, “I was advising them over a period when they weren’t in crisis. I’m pretty happy to say, I gave these guys advice… on how do you build opportunity for the poor to learn to be non-poor?”  Until caught, he hadn’t bothered to mention his own involvement, even as he attacked Barney Frank and others for taking Freddie Mac’s campaign contributions.

Through it all, Gingrich has denied being a lobbyist, apparently adhering to a very narrow definition – he’s not officially registered with Congress under the Lobbying Disclosure Act of 1995, as amended by the Honest Leadership and Open Government Act of 2007.

But you do the math: According to Julie Hirschfeld Davis and Kristin Jensen at Bloomberg News, “The former Georgia congressman reported assets in 1997 of between $197,000 and $606,000, according to his last House personal financial disclosure report, which permits lawmakers to record their wealth in broad ranges. According to his 2011 presidential disclosure report, the Republican primary candidate today is worth between $7.3 million and $31 million.”

Not bad for government work.