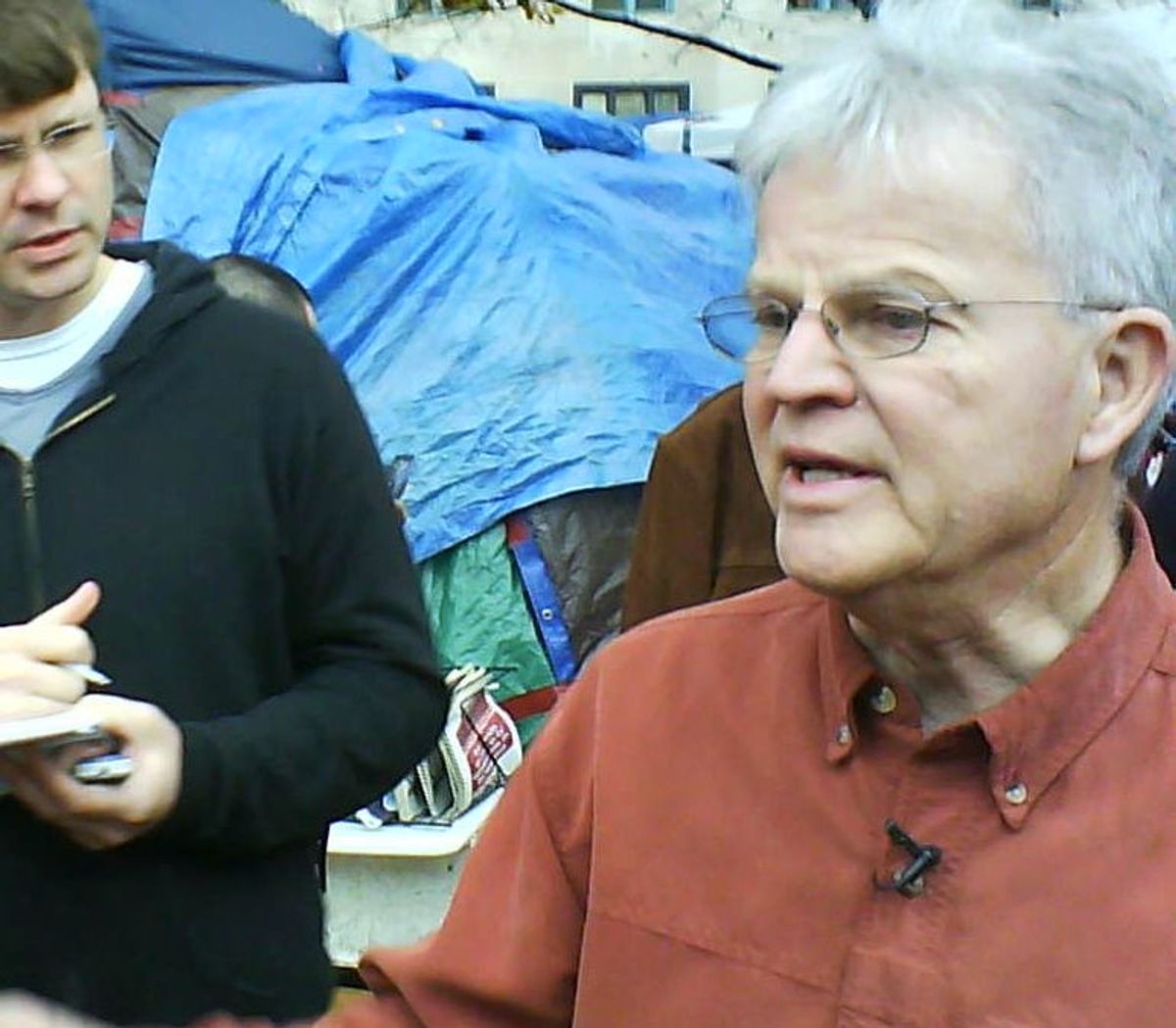 Last month, former Louisiana congressman Buddy Roemer broke with his fellow Republican presidential candidates and visited the Occupy Wall Street protesters with an open mind. He tweeted out their stories of exasperation with the political and economic systems of America, and set himself apart from his colleagues who have scorned the movement.

Today Roemer doubled down on his unorthodox brand of conservative populism by paying a visit to the Occupy DC site in Washington where he blasted lobbyists and called for occupation of their offices.

Roemer is just one small reason why Republican voters are much more excited about voting in 2012 than their Democratic counterparts. Republicans are about to vote in a series of presidential primaries that will allow them to take part in a robust contest of ideas being put forth by a diverse slate of nominees. This contest of ideas will have a lasting impact on the country's political future.

Democrats appear to have no such opportunity. With no viable primary challenge, there seems no way for Democratic voters to vent their frustrations with the president or send his party a message. Viewing any potential third-party challenge to Obama's left as all but guaranteeing the election of a right-wing Republican -- as the United States lacks a rank-order electoral system--  many disaffected Democrats have simply resigned themselves to holding their nose and voting for Obama to prevent a President Romney.

But disappointed voters who would choose Obama as the lesser evil do not have to resign themselves to this choice. They can vote for "uncommitted" in the Iowa Democratic caucuses, as one leading occupation activist there has proposed. Or they can vote for Buddy Roemer in the Republican primaries.

No, Roemer does not register in the national polls and many political reporters ignore him. Not Salon's Steve Kornacki who reported last month that Roemer

won four races for Congress in the 1980s, was elected governor of Louisiana in 1987, and then after being defeated for reelection (by an ex-Klansman and a future convicted felon) in 1991 went into business, serving as CEO of a midsize bank. He is also running for the Republican presidential nomination — not that you’d ever know it

Yet two states just passed measures to make sure he isn't on the GOP primary ballot next year. Roemer's message may not be popular but party leaders aren't taking any chances on letting people pull the lever for him. That is probably because they don't want to encourage crossover voting in the Republican primary states.

If just a fraction of the Democratic primary voters in 2008 were to switch parties and vote in the Republican contest in 2012, they would represent a voting bloc capable of reshaping the Republican primary and elevating certain issues into the national media dialogue that otherwise would not be discussed. Doing so would not significantly threaten Obama's reelection yet it would enable voters to push both him and the Republicans on a number of issues.

Roemer is in many ways a traditional conservative. He supports expanding some domestic oil drilling. He believes, against the evidence, that allowing insurance companies to compete across state lines will lower the cost of healthcare. He also wants to significantly reduce federal spending and enact more conservative policies on personal income taxation.

Yet at the same time, Roemer is running on a boldly reformist campaign that has earned praise from the likes of Rachel Maddow and Jon Stewart. The central theme of his campaign is that he wants to be "free to lead" -- free from corporate and special interest money, that is. He is limiting contributions to his campaign to $100 and is calling for campaign finance reforms including banning lobbyists from participating in fundraisers and criminal penalties for violating campaign finance laws.

He wants to stand up to the pharmaceutical industry, endorsing price competition in pharmaceutical drugs -- something President Obama bargained away in a backroom deal, breaking a campaign pledge.

At a campaign event I attended in Washington earlier this year, Roemer explained how he wants to end loopholes in the tax code that reward companies for moving jobs overseas. He sounded less like fellow Republican Mitt Romney and more like old-fashioned trust-busting Republican Teddy Roosevelt.

Roemer is also a critic of corporate-scripted "free trade" agreements. "Fair trade ought to be a freedom we can count on," Roemer told Wikinews last month. "A family without work is not happy, not healthy, not free. Our greatest loss of freedom has been loss of jobs."  This is a marked contrast to Obama's support for NAFTA-like agreements. He also is opposed to Obama's foreign wars.

Occupying the GOP primaries wouldn't even necessarily require switching parties in 17 states, where primaries are open or partially open, including  Georgia, Virginia and Michigan. In Iowa, you can participate in the GOP caucuses as long as you register as a Republican, which is what former Gov. Terry Branstad has accused Democrats of doing

The Republican Party establishment will surely complain, but that should not worry voters. The presidential primary process is there for Americans to decide the parties' nominees and to prevent party bosses from controlling the system. Buddy Roemer may not be many people's first choice for president. But he is a pretty good choice for sending a reminder to the Republican field and the White House of an oft-forgotten fact: The 99 percent includes a lot of Republicans.