The people we\'re most grateful to have around this year 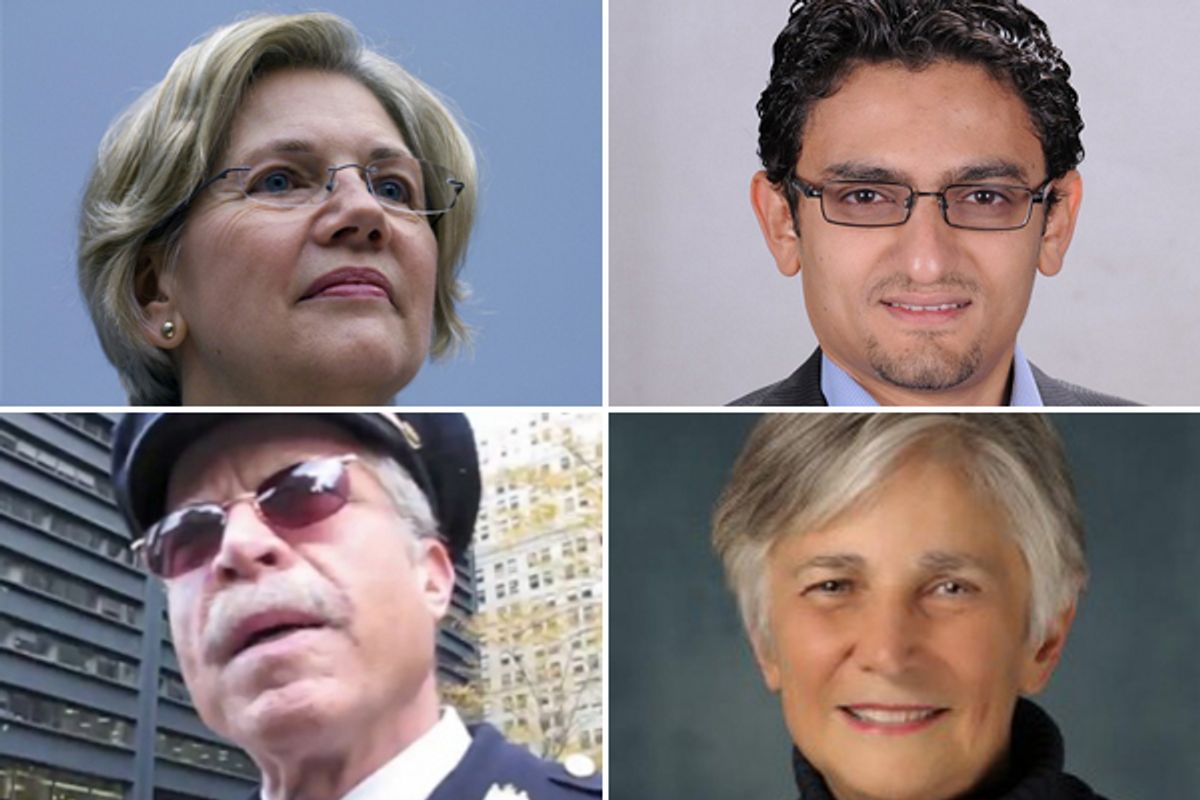 Admittedly, I spend a lot of time grousing and naysaying. Today, though, we put that negativity briefly aside, as we celebrate a day of thoughtful reflection, and a night without a GOP presidential debate. I thought it appropriate, on the occasion of Thanksgiving, to thank some of the people who've worked to make the country and the world a better place over the least 12 months.

Thanks to Wall Street Occupier Jesse LaGreca, who didn't only show up the Fox reporter sent to embarrass occupiers, but also managed to get the OWS message across on a Sunday political chat show, which is essentially unheard of. So thanks to you, for bringing up economic justice to the ancient panel of crusty establishmentarians on "Meet on Press."

Thanks to Scott Olsen, the Iraq vet and victim of brutal police overreaction at Occupy Oakland, for showing the many forms that fighting for one's country can take. We're especially thankful that he's recovering from the coma induced by a tear gas canister fired directly at his head, and is well enough to give public statements.

Thanks to retired Police Capt. Ray Lewis, who participated in Occupy Wall Street in full uniform, and was arrested for his participation. As stories of police brutality spread, Lewis reminds us that most cops are fellow members of the 99 percent, working hard to stay afloat in an increasingly class-segregated nation. Most of them aren't happy being seen as serving the interests of the oligarchy, and where there's abuse, it's generally the result of poor training and misguided priorities from the top, not the rank-and-file.

Thanks to Diane Ravitch, and other school reform critics like Dana Goldstein, for adding desperately needed perspective and balance to the school reform debate, a debate in which one side receives what could charitably be referred to as the lion's share of favorable press coverage and philanthropic support. Their needling forces school reform advocates and foes alike to examine their assumptions and strengthen their arguments, and they sometimes end up causing even dilettante education policy gurus like Steven Brill to see that the seductive claims made by technocrat reformers tend to be overstated. Better, smarter policy debates are enough of a rarity that we should all be thankful for anyone who can manage to produce them.

Thanks to Wael Ghonim for putting aside his very good job with Google to put his life on the line for freedom and liberty for his people in Egypt. Lots of tech entrepreneurs and engineers talk of changing the world; few of them spend weeks in custody as political prisoners for their efforts. Wael Ghonim was instrumental in organizing the popular revolt that toppled a dictatorial regime,

Thanks to Nick Davies, who, along with Guardian investigative correspondent Amelia Hill and others at the Guardian, has been relentlessly exposing News Corps's criminal news-gathering practices in the U.K. Reporting on the misdeeds of the powerful -- and News Corp is hugely powerful, especially in Great Britain -- is the best reporting there is, and the investigations and arrests that have resulted from Davies and Hill's reporting will change the culture of the international media industry for the better. We'll be especially thankful if News Corp shareholders force the giant conglomerate into more responsible corporate management.

Thanks to Elizabeth Warren for perfectly articulating the liberal ideal of the social contract. One good senator may be limited in how much she can achieve, but if she wins and inspires more like her to follow -- and imitate her unapologetic rhetoric of fairness -- we'll have even more to be thankful for.

Thanks to Sree Sreenivasan, dean of the Columbia School of Journalism, for making a mockery of dishonest bully James O'Keefe. O'Keefe's only power comes from other media outlets taking him seriously. In one hilarious video, Sreenivasan showed why O'Keefe's a joke.