Thanksgiving fiction: What if turkeys had defeated the Pilgrims?

Our Thanksgiving pageants would sure be different! In "100 Dead Pilgrims," an acclaimed novelist imagines the scene 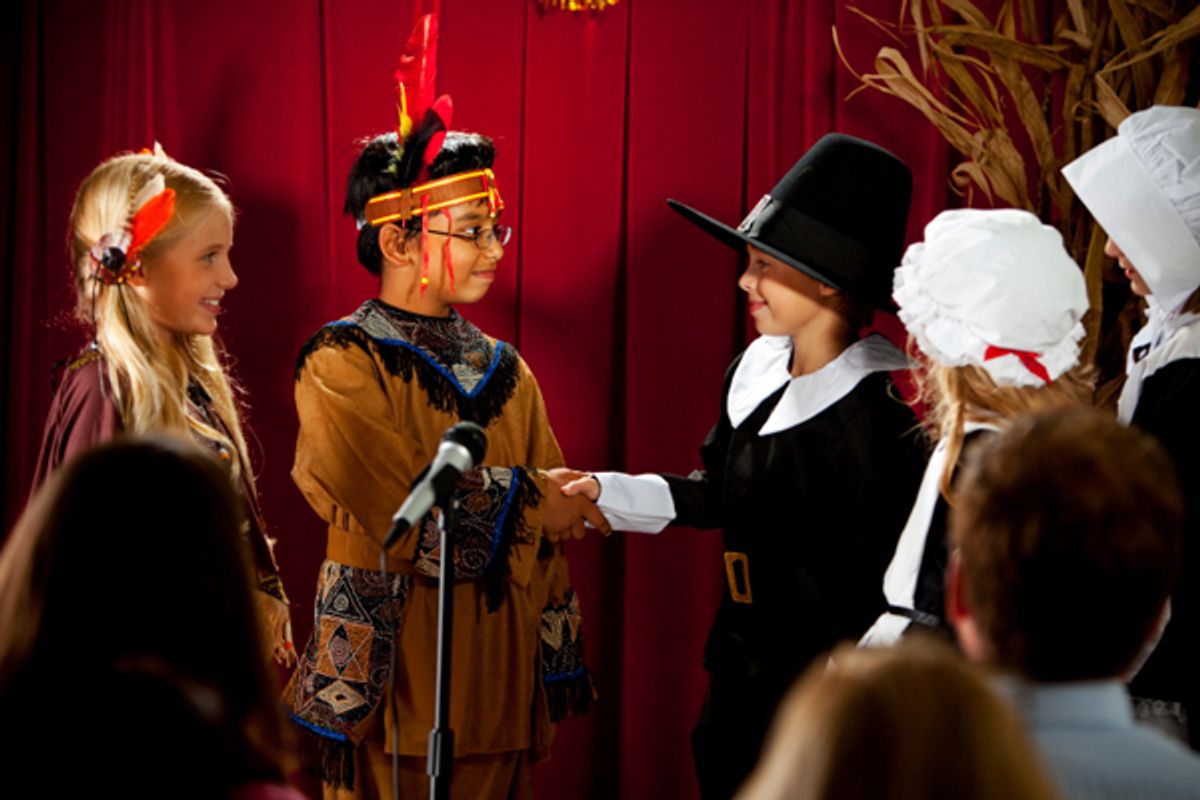 It started with the turkeys. Joey Running Rabbit Perez, who had the lead role of Squanto in the fifth grade’s Thanksgiving play, told Caleb Massachusetts-Jones, who played William Bradford, that the papier-mâché turkeys suspended upside-down from the clothesline above the stage were haunted, that they came to life and poisoned people in their sleep. The drama teacher, who had intended for them to serve as a symbol of strength and salvation, admitted later that maybe they were a little terrifying, with their cold brass-button eyes, their blood-colored waddles grazing the children’s heads as they rehearsed below. Apparently Caleb, the reigning county spelling-bee champion, had a nightmare (wetting his sheets, at age 10), and his mother, furious, called the drama teacher, who had overseen scores of productions at Patuxet Valley Elementary without a single incident.

The drama teacher made Joey apologize, and with a Magic Marker she drew a broad smile under each of the turkey’s paper water-cup beaks, which only made them appear more deranged. The turkey’s gruesome smiles seemed to match her own, her red lipstick perpetually smeared outside the contours of her lips, as though her determination could not be detained.

In the after-school rehearsals on the cafeteria stage, Joey made a fine Squanto, with his bow and arrow and breechcloth, a single feather tucked into the nape of his glossy ponytail. In Act I, when he greeted William Bradford with a handshake, when he showed the Pilgrims what rivers to fish in, and how to plant fish under the soil, and how to store the vegetables for the winter, his eyes glimmered with the light of kindness. When he showed them how to behead the dangling turkeys, first giving thanks for their meat, his hatchet gleamed with humility. And in Act II, when he watched from behind a plywood tree as Bradford and the other Pilgrims went about their careless decapitation, gobbling greedily, forgoing their thanks, his face showed the betrayal and disappointment, the melancholy wisdom of an ancient chief.

The script, penned by the drama teacher herself, necessarily had to leave out some nuance. They had only 50 minutes. By the end of the second act, the Pilgrims had fallen to their death, their Pilgrim hats spilling to the floor, the women crying out in pain, the baby dolls tumbling from their arms. Squanto came across the bodies of the 100 dead Pilgrims. They lay heaped across the blue gym mats. Squanto fell to one knee.

“What’s this I see? A massacre! Yet where are the arrows?” He picked up a papier-mâché turkey. He held it aloft. He put two and two together.

“A gift from the skies! A miracle! These trespassers who called us friends heeded not our warning! Now these flightless creatures have poisoned the traitors. They have sacrificed their breasts for us!”

Here a couple of boys, dead Pilgrims, would snicker.

Squanto plucked the feather from his hair and, laying the turkey to rest on the ground, placed the feather on its chest. “Now,” he said, raising his arms to the sky, “we must show them our thanks. From this day forward, we will abstain from the meat of these mighty birds!”

The drama teacher shuddered at the emotion of Joey’s monologue. She chewed the eraser end of a No. 2 pencil with her lipstick-stained teeth.

We all know what happened in Act III. Squanto and his tribe frolicked around the vegetable feast. At the center of the table sat the ceremonial baked pumpkin filled with stuffing. The drama teacher played “Praise the Righteous Souls of Birds” and “Pass the Mashed Potatoes” on the upright.

At least, that was the way it happened in rehearsal. But after Caleb’s mother called the drama teacher, Joey’s understudy, Little Ferret, complained to his mother that Joey only got the role because of his skin tone. But Joey’s complexion was as much Puerto Rican as Wampanoag. Little Ferret had more native blood than any other kid in the fifth grade, Little Ferret’s mother told the drama teacher and anyone else who would listen.

But what did skin tone matter? another parent wondered, tailgating at a school football game one Sunday. Should all the Pilgrims be paleskins? What about the black-skinned students? Should they wear whiteface? That would be a lot of makeup for 100 dead Pilgrims, and the production was on a budget; the school had to be thrifty; they’d already spent all that money last year when the parents voted to change the mascot from the Colonists to the Voyagers, and then when that small band of parents pressed the cafeteria to start serving turkey, for those children who choose to partake, and the school compromised by offering free-range chicken instead, and everyone knew how much that cost. And how did so many children get stuck playing dead Pilgrims, anyway? It was the only way to give a role to everyone in the fifth grade, but some parents complained that playing a corpse was still unfair, not to mention obscene.

One by one, then two by three by four, parents began dropping by the cafeteria after school to watch the rehearsals. They came early to pick up their children, slurping extra-large cups of coffee, their hands-free phone devices clipped over their ears. Wasn’t “traitors” a little offensive? they whispered. And wasn’t Squanto’s breechcloth a tad risqué? And why wasn’t he called Tisquantum? Could there at least be an asterisk in the playbill, a footnote with his proper name?

Then came the email. One girl’s mother, a professor of Native Studies at Patuxet State, sent a note to the drama teacher, CC’ing all the parents in the grade, to remind her that Squanto’s role as charitable neighbor turned turkey worshipper was much contended, that, indeed, the date and site and circumstances of the first Thanksgiving had in recent years been challenged in any number of fields. Though there was some evidence of a number of British deaths in the Patuxet colony, it was widely acknowledged among scholars that there was no provable correlation between the consumption of fowl and the colonists’ eventual demise, and if there was a correlation, it was almost certainly a simple bacterial infection, such as salmonella, due to unsanitary food preparation. “A single interpretation of this controversial holiday,” she concluded, “is insufficient for the impressionable minds of our diverse population of children.”

Before the drama teacher had even opened the email, the parents had replied-all several times over.

“Hear hear! This is the 21st century. Like it or not, we live in a pluralistic world. Vegetarians, omnivores, the fowl-free. Natives and paleskins and every other color of the rainbow. We have to learn to respect one another!”

“That includes respecting the views of those who believe those turkeys were miraculous. It’s a holiday, people. Couldn’t we all use some miracles?”

“A miracle that poisons any outsider who dares cross your traditions? You can’t stage a play where 100 paleskins die of a horrible epidemic and then the natives do a dance. That’s fucked up.”

“It’s not about the turkeys. Why do we have to camouflage every holiday with a cuddly stuffed animal? It’s about the divine intervention those beautiful turkeys represented — nature reclaiming a land for those who respected it.”

Then a parent sent a link to an open letter to Congress, with over 40,000 signatures, proposing the federal cancellation of Thanksgiving, due to its heinous celebration of death and its unacceptable intolerance of multiple religious, ethnic and dietary traditions.

“Brilliant! Why don’t we ban football next?”

That was from the school’s football coach — Coach Perez, Joey’s father.

“Banning football would be an excellent way to conserve school resources,” Caleb’s mother, Mrs. Massachusetts-Jones, replied. “So would banning a tasteless, hostile, simplistic play that teaches our children to believe in myths!”

She’d had a bottle of wine by this time; she was going through a divorce; her daughter was wetting the bed. Later she regretted the name-calling. But the next afternoon, when she click-clacked her heels over the green linoleum tiles of the cafeteria, there was Coach Perez and there were dozens of other parents, scowling at the stage, arms crossed, while their children galloped on broomstick horses. The room smelled of bubble gum and Elmer’s glue and charred free-range hen. The drama teacher had nibbled the eraser end of her pencil down to the bitter metal nub.

“It’s lovely to see so many of you taking interest in our production,” she began.

But before she could go on, Little Ferret’s mother climbed the stage steps. The children looked to their parents.

Squanto held up the heft of his weapon.

“For Pete’s sake,” said Coach Perez. “What are they going to do? Butcher each other?”

Mrs. Massachusetts-Jones marched past Little Ferret’s mother and onto the stage. She took Caleb by his jacketed arm. “That’s enough,” she declared. “You’re done.”

Several parents booed. One threw her empty coffee cup at the stage.

“Please,” the drama teacher said. “We can’t take William Bradford out. He doesn’t have an understudy. The play is in three days!”

Mrs. Massachusetts-Jones stomped over to Joey and swiped the hatchet out of his hands. She dragged Caleb down the steps and through the sea of parents, his loafers barely touching the ground. She stepped up to Coach Perez and extended the hatchet, but Coach Perez just shook his head.

“No wonder your kid wets the bed,” he said, in a low voice but not low enough.

That night, after football practice, after walking through the dark parking lot, Coach Perez would find the hatchet between the seats of his new Ford F-150 truck, amid the pebbly shards of his windshield. By that time, the principal had circulated an email officially canceling the production of the fifth graders’ Thanksgiving play, due to “parental concern” and “irreconcilable artistic points of view.” But it came as no surprise. Already parents were pulling their children out of the drama class, the school. By the end of the year, the drama teacher, whose hair had turned as white as a tablecloth, would retire.

But before she left, before the Thanksgiving holiday, when families sat down with their loved ones, and carved the pumpkin, and said their own kind of grace, she staged one final, secret dress rehearsal. It was during the fifth-hour drama class, when the cafeteria was empty, the janitor sweeping French fries and paper straw wrappers at the back of the room. Not all 100 Pilgrims were there. There were maybe 25. But Squanto was there, and even brave William Bradford. They spoke no words to each other but the lines they’d been given, putting aside their parents’ enmity for the sake of the play they’d spent a month practicing. The drama teacher sat at the piano by the window, where the first flakes of the season’s snow were cascading over the silent playground. In the early afternoon light, the turkeys looked rather harmless, like celestial bodies orbiting the stage. At the close of Act III, when the dead Pilgrims rose and the whole cast took a bow, natives and Pilgrims, joining their tiny hands together, she played “My Heart Goes On Without Wings.” And over the deafening sound of her own applause — for there was no one else to clap with her — she closed her eyes and whispered, “What a beautiful story.”

Eleanor Henderson is the Chair of the Department of Writing at Ithaca College and the author of the novels "Ten Thousand Saints" and "The Twelve-Mile Straight." Her memoir "Everything I Have Is Yours" will be published next summer.