The birth of America's bastardized cuisine

Since that mythic first Thanksgiving, we\'ve relied on native plants to augment dishes from the old country 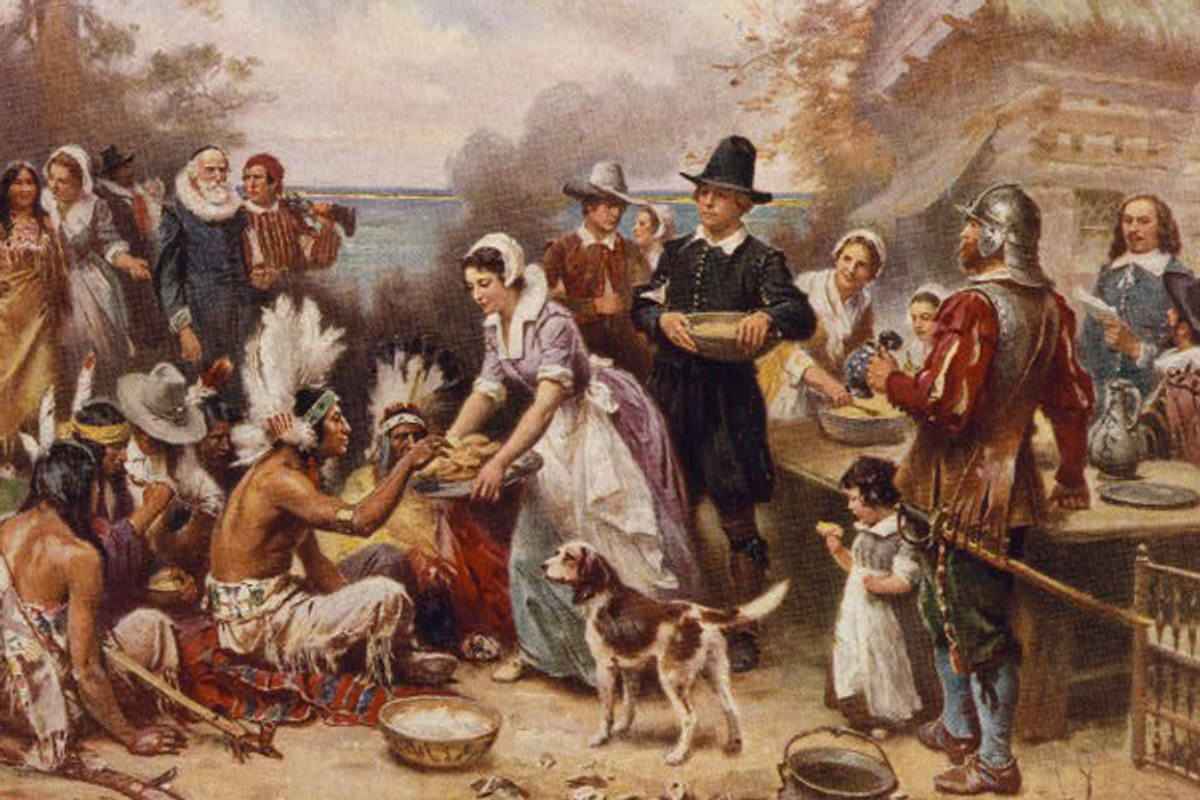 America is a country originally settled by scoundrels and religious zealots -- thieves, embezzlers, prostitutes, arsonists; English Puritans, French Huguenots, German Amish, Czech Moravians and Russian Mennonites. The screwed-over Scotch-Irish, the shanghaied London street punk, the peace-loving, slave-owning Quaker, the enslaved Gullah. It is also the native land of the Ojibwa, the Zuni, the Makah, the Miwok and the Seneca. This alchemy of sinner and saint, “savage” and sophisticate is the source of our original cuisine: a stolen, borrowed, distorted culinaria that can pique the tongue, clog the arteries, fire the belly, or mellow the soul.

In keeping with American tendencies, Thanksgiving is a bastard holiday, cobbled together from homegrown traditions and the hokey imaginings of 19th century writers, along with actual historical facts. The facts are thus: The “first American Thanksgiving” was probably observed in the South, not at Plymouth, and it would have been a day devoted to prayer, not pie. As for the famous Plymouth pilgrims? The settlers that staggered off the Mayflower to strike up a miserable township on the rocky shore did not call themselves pilgrims. At the time, they were known by cagier names: separatists (religious idealists) and strangers (various dreamy and desperate characters the separatists had recruited in order to swell their meager ranks and coffers). The settlers wore colorful clothing and did not favor buckles, though they did sport the tall broad-brimmed hats, which you may remember from your elementary school days.

The old schoolbook story is true: Tisquantum (or Squanto) taught the Plymouth settlers how to grow corn. The tale is iconic because it illustrates how native plants and Native American traditions were instrumental in the forging of American identity. From Cape Cod to Cape Perpetua, native plants were instrumental not only in the survival and health of the settlers, but in the creation of a uniquely American cuisine that is one of the least revolting results of European conquest.

Tisquantum was a handsome man and a talker; the turn of events in his life had given him many opportunities to hone his silver tongue. Six years before he had been kidnapped by Thomas Hunt, a lieutenant of Captain John Smith (more famous for his dalliance with Pocahontas). Hunt sailed for Spain to sell his captives into slavery. Catholic priests of an anti-slavery bent intervened, and Tisquantum escaped to England, where he learned to speak English. He talked his way onto a fishing boat bound for Newfoundland. The trip was more roundabout than he intended and required a good deal of fast-talking. When Tisquantum finally arrived home, his struggles must have seemed all in vain: He stepped ashore to discover the aftermath of European-borne plague. The bones of his friends lay scattered in the sun, and his home village, Patuxet, overtaken by the creeping detritus of the forest.

Tisquantum was later captured by Massasoit, a leader of the Wampanoags, the confederation of tattered tribes that lived in the forests surrounding Plymouth. Massasoit was in need of an interpreter, and once again Tisquantum's talking skills came in handy. Over shots of separatist moonshine, he negotiated a testy alliance between Massasoit's people and the separatist settlers. Massasoit, whose village had been decimated by the plague, saw the alliance as a measure against his ancestral enemies, who might otherwise take advantage of the confederation's weakened state. The settlers, who had lost half their population to scurvy and starvation during that first brutal winter, also saw the alliance as a means of survival. They, at least, were correct.

With Tisquantum's help, the settlers were able to put in stores for the next winter. That following autumn Edward Wilson would write, “We set last spring some twenty acres of Indian corn, and sowed some six acres of barley and peas; and according to the manner of the Indians, we manured our ground with herrings, or rather shads ... Our corn did prove well; and, God be praised, we had a good increase of Indian corn ...” In the same letter he describes the celebratory feast that would become the basis for our modern concept of Thanksgiving: the settlers provided fowl and Massasoit's people brought five deer.

Despite that feast's later relevance to American culture, at the time the settlers did not seem to ascribe it much importance. As far as we know, they did not call it Thanksgiving or commemorate the feast in years to come. To the Native Americans, separatists and strangers involved in the feast, it was probably just that: a good meal. Regardless, the three-day festival in 1621 is emblematic of the birth of American cuisine. From cornmeal mush to maple syrup, this cuisine reflects not only the bounty of American plains, prairies and forests, but also the ingenuity of Native cooks, whose culinaria incorporated roasted and stewed meats, steamed or boiled vegetables, baked or fried cakes and breads, and dressings of fat, nuts, oils and seasonings.

Native farming was equally refined. America's people had been cultivating maize for thousands of years. Kernels were passed from culture to culture, and the plant was revered as the staff of life. The Maya worshiped a maize god, a beautiful young man who grew from the corn foliage; in his honor, Maya nobles performed ritual bloodletting in stone temples decorated with corn. The Seneca goddess of maize delivered ears of corn from her breasts. In Zuni mythology, corn appears as a cadre of seven sexy maidens who each represent a type of corn: blue, red, white, speckled, black, and the youngest sister, sweet corn.

With the pantheon came an equally enticing assortment of food. The Maya steamed tamales and grilled tortillas over blazing comals; the Navajo mixed a pinch of cedar ash with corn meal and pit-baked corn cakes; the Hopi seared blue corn flat bread on griddles slick with sunflower seed oil. Settlers would adopt and adapt these culinary techniques as they forged across America's grasslands, woods and deserts to settle in her hamlets and hollows. Their corn-based innovations include buttery cornbread, spoon bread, fried cornmeal mush with maple syrup, and bourbon.

In modern Mexico, every facet of culture reflects Native influence. In one version of the story, the Aztecs and the Zapotec and the Hauxtec were thoroughly subjugated, but you still see their folkways and bloodlines reflected in mainstream Mexico: from the color of skin to the tortilla on the table. In the United States, your typical citizen doesn't look down at his or her own skin and get a reminder of the legacy of European/Native American interaction. We don't dwell among the tangible ruins of lost civilizations. To most of us, the story of interaction between settlers and natives is a bloody story with a sad ending: the once proud bands vanished like ghosts; survivors stripped of their land and language and funneled into reservation schools where they were taught to forget everything they knew. The blood shed obscures another story: in the beginning, settlers observed and absorbed the survival tactics of the American Indians. Our original culture is more Native than we remember, and our cuisine mirrors this other story.

Native residents of New England taught settlers which beans were well adapted to the land's climate; colonists copied native recipes for life-sustaining bean and corn stews. As settlers moved west, they learned to gather wild rice like the Ojibwa. They picked up the Ojibwa and Iroquois habit of tapping the maple tree in springtime. They copied the Menomoni practice of sweetening the bitter fruit of another native shrub that grew in bogs and hollows. Settlers called the shrub “craneberry” because its white blossoms looked like tiny cranes. The first American cookbook, “American Cookery,” recommends that cranberry sauce be served with Turkey.

Pumpkin pie didn't grace the table at the “first Thanksgiving,” but pumpkins were certainly a staple food in the Americas. Native Americans ate pumpkin dried, stewed, baked and roasted. In the Great Lakes area, tribal cooks roasted pumpkins stuffed with wild rice, rendered fat, venison and buffalo. In New England, colonists took a cue from the locals and figured out ways to sneak the hardy squash into every meal of the day: settlers consumed pumpkin pancakes, pumpkin flower blossom sandwiches, pumpkin cornbread, pumpkin soups, and, inevitably, pumpkin beer. A pumpkin pie recipe appears in the 1796 edition of “American Cookery,” though in the early days settlers were more likely to bake a whole pumpkin, hollowed and filled with sweetened milk and spices.

In the South, colonists would rely on the big three of Native cooking: corn, beans and squash, as well as more obscure ingredients: possum grapes, poke and the paw paw. On the big plantations, African cooks fused Native American ingredients and African techniques and ingredients to invent a rich culinaria that, in its greasy and imaginative glory, is a direct result of both the cruelty and the eternal promise of America.

In Lousiana's bayou country the Choctaw powdered native sassafras leaves to create a flavorful thickening agent, which became the filé powder in the sacred canon of gumbo ingredients. (Hence the Hank Williams song “Jambalaya (On the Bayou)”: “Jambalaya and a crawfish pie and a filé gumbo.”) In addition to appreciating the culinary properties of the plant, natives and settlers used sassafras root as a medicine. As the excellent and largely forgotten J.C. Furnas notes in “The Americans”: “The first homeward-bound cargo out of Jamestown consisted of clapboard riven from American logs ... and of the pungent wood or roots of the sassafras tree, then highly valued in medicine on the principle that whatever smells queer (if seldom as pleasantly as sassafras) is probably good for what ails you.” Sassafras would still be a popular home remedy 200 years later; in a 1866 guide to home health, sassafras appears as an ingredient in tonics invented to cure “inward hurts and ulcers,” “dropsy,” “rheumatism in the loins,” “white swelling,” as well as consumption, ague and scrofula.

Sassafras was a common remedy among Appalachians. As an old-timer put it: “That mountain is like a drugstore. You don’t have to have money, you just need a little bit of knowledge.” Peppermint tea was sipped for upset stomachs; goldenseal for sore throats or ulcers; and clover tea “just for enjoyment.” Settlers learned plant lore from the Appalachian natives, who made poultices of poke, and dined on pigweed, spring beauty and fiddleheads. In the spring, families took to the woods to gather ramps; the pungent wild onions offered a welcome change of pace from the winter's starchy diet. In the sonorous and wild hills, native ingredients and culinary techniques of varied immigrant traditions fused, giving forth regional delicacies such as eggs scrambled with poke weed, cornbread gravy and, of course, moonshine.

When settlers finally reached the immense, rain-drenched forests of the Pacific Northwest, they discovered a culinaria built upon salmon, and supplemented with wild plants such as fiddleheads, salal and camas. Like their Appalachian counterparts, settlers learned the Native sources of springtime vitamin C: salmonberry shoots and the delicate stalks of the thimbleberry bush.

Two hundred years later, many of our essential American food and beverage traditions still stem from American plants, though the manifestation may be twisted beyond recognition. Take, for example, cream of tomato soup, the corn dog, the corn flake, the French fry and the Manhattan. Despite the potential presence of Sara Lee pies and boxed stuffing, our Thanksgiving table still represents the bounty of our once wild land: pumpkin pie by way of Central America, mashed potatoes by way of South America, and of course, those satisfying slices of gelatinous cranberry sauce. Tradition never tasted so sweet.