Will the Manchester Union Leader's coveted endorsement prove to be a catapult for Gingrich -- or a dud? 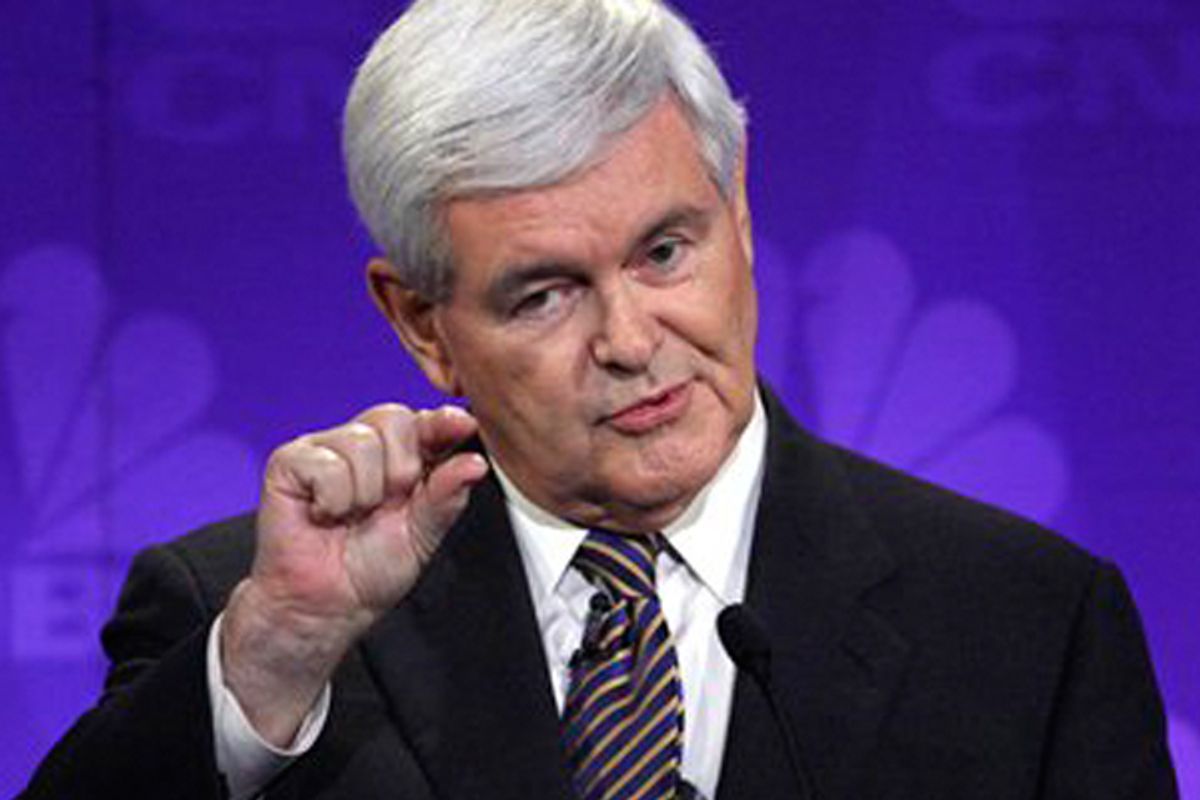 The most significant newspaper endorsement of the Republican presidential race has gone to Newt Gingrich. The Manchester Union Leader, the largest daily publication in New Hampshire, gave its blessing to the former House Speaker in a Sunday editorial that, per the paper's aggressive style, appears on the front-page.

The staunchly conservative Union Leader carries unusual significance in New Hampshire Republican politics because it loudly and persistently champions its preferred candidate after weighing in. Or as publisher Joe McQuaid once put it: "The Union Leader's style is we don't just endorse once. We endorse every damn day. We started endorsing Reagan in 1975 and never stopped."

For Gingrich, the endorsement could have implications not only in New Hampshire, where Mitt Romney has enjoyed commanding leads all year, but also nationally, with the much-anticipated news further encouraging conservatives to rally around him as the main alternative to Romney.

That said, the Union Leader's blessing isn't always an automatic ticket to fortune in GOP presidential politics. Under longtime publisher William Loeb, whose vitriolic editorials earned national attention in the 1970s, the paper gave a big boost to Reagan -- but it also threw in with John Ashbrook's quixotic 1972 GOP primary challenge to Richard Nixon, which netted the Ohio congressman just ten percent (to Nixon's 68) in the Granite State.

Loeb was succeeded as publisher after his 1981 death by his widow Nackey, who then handed the reins to McQuaid nearly two decades later. In that time, the Union Leader's presidential track record has been mixed. In some primaries, it has played an inarguably big role in shaping the agenda and lifting its candidate. John McCain's comeback in the last cycle can be partly attributed to the paper's surprise endorsement. Other times, though, the paper hasn't been quite as enthusiastic, and it's shown.  Below is a review of all of the Union Leader's GOP presidential endorsements since 1988; we'll see whether Gingrich's becomes one of the success stories -- or one of the duds:

The Union Leader's heart wasn't really in this one, something that Nackey Loeb all but admitted in her (front-page, of course) December 1, 1987 editorial backing the former Delaware governor. "It is no secret that this newspaper has not been a flag-waving enthusiast for any of the candidates running for president," she wrote. "A lot of the conservatives are in the same boat."

The paper had never been fond of the GOP race's two clear front-runners, Vice President George H.W. Bush and Senate Minority Leader Bob Dole. Eight years earlier, when he'd run to Reagan's left in the 1980 primaries, Bush  had been singled out for ridicule by William Loeb, who dubbed him "a spoiled little rich kid." Bush, who spent his years as vice president striving to reinvent himself as a born-again Reaganite, did try to ingratiate himself with the Union Leader in the run-up to '88, even showing up at a 1986 Washington event that honored Loeb, but to no avail.

Du Pont, who had served as Delaware's governor from 1977 to 1985, was polling at 3.5 percent in New Hampshire at the time of the endorsement. The editorial cited his plan to privatize Social Security, his promise to force able-bodied welfare recipients to work, and his willingness to include former U.N. ambassador Jeane Kirkpatrick -- whom the Union Leader had previously urged to enter the GOP race -- in his administration. "Someone must do the job," it concluded.

More than anything, the endorsement was a blow to then-Rep. Jack Kemp, who was seeking to emerge as the conservative movement's consensus alternative to Bush and Dole. In the February 16, 1988 primary, Bush won New Hampshire with 37 percent, followed by Dole with 28 percent, Kemp with 13, du Pont with 10, and Pat Robertson with 9.

It wasn't clear there'd even be a contested Republican primary in 1992 until Pat Buchanan, a Nixon and Reagan aide-turned-television commentator, decided in early December to challenge Bush, the sitting Republican president. Almost immediately, it became clear that Buchanan would have the the support of the Union Leader, which saw Bush's presidency -- and his 1990 decision to go back on his "Read my lips!" anti-tax pledge -- as a validation of its longstanding suspicion of him.

In a series of editorials, the paper welcomed Buchanan's entrance, amplified his attacks on the White House and demanded that Bush debate (he refused). Finally, on January 22, it formally endorsed Buchanan -- a recommendation that was repeated in subsequent front-page editorials on February 7 (headline: "We need a fighter, not a wimp"), February 12 ("A clear-choice: Cop-out or conviction?"), and February 17, in a primary eve editorial arguing that "a vote for Buchanan is a vote for something - a return to the conservative principles George Bush preached but never practiced."

It's hard to quantify, but the Union Leader's aggressive advocacy surely helped Buchanan, who beat the expectations game in holding Bush to a 53-37 percent margin in the February 18 contest. "I think King George is getting the message!" an ebullient Buchanan crowed that night. The result, which the press immediately likened to LBJ's surprisingly narrow win over Gene McCarthy in the 1968 New Hampshire Democratic primary, was humiliating for the sitting president and focused the political world on his overall political vulnerability.

The overwhelming favorite in the Republican race, Dole, was a nonstarter for the Union Leader, which had shown no interest in his two previous White House campaigns and which early in 1995 dubbed him "a deal-maker at a time when the public has had it with wheeling and dealing."

Initially, the speculation was that Texas Sen. Phil Gramm, who entered the race with a head of steam and seemed poised to serve as the right's consensus alternative to Dole, would win the paper's support, but Gramm shot himself in the foot by failing to grasp the Union Leader's almost religious devotion to preserving New Hampshire's first in the nation primary status. While the other candidates heeded demands from Granite State Republicans to shun Arizona, which was attempting to encroach on New Hampshire's position, Gramm refused to play along -- a tone deaf decision that helped nudge the Union Leader toward another endorsement of Buchanan, which it announced on September 7, 1995.

"Our country is in great need of a leader whom we can trust, who has moral integrity, who would put America first and who is capable of sending Bill Clinton back to Arkansas," the editorial declared.

In the high-water mark of his political career, Buchanan pulled off a stunning victory in the February 20 New Hampshire primary, edging out Dole by a 29-28 percent margin, with Lamar Alexander a close third at 26 percent. (By then, Gramm's candidacy had imploded; he dropped out after Iowa.) In his victory speech, Buchanan hailed Nackey Loeb as "my political godmother." This ended up being the last primary in which Loeb called the shots on the paper's endorsement.

This was another du Pont situation. By late 1999, the GOP field had been radically thinned by the party establishment's nearly unanimous embrace of George W. Bush, who dwarfed the rest of the field in fund-raising, endorsements, and poll numbers. His only opponents left standing were John McCain, Gary Bauer, Alan Keyes, Orrin Hatch and Forbes.

To the Union Leader, Bush was cut from the same political cloth as his father -- "a nice guy but an empty suit with no philosophical underpinning," as Joe McQuaid, who had taken over from Nackey Loeb and who made the endorsement decision, put it in a late 1999 interview with the Washington Post. McCain, who was pinning all of his hopes on New Hampshire and was polling competitively there, wasn't an option either -- "the most liberal guy on the Republican side," according to McQuaid. That left Forbes, who had fared credibly in his self-funded 1996 bid, as the most viable conservative option. McQuaid's editorial announcing the endorsement acknowledged that Forbes was "a geek" whose prospects for victory weren't strong. But, McQuaid wrote, the paper preferred to "go with a long shot who has the same ideology than a sure shot who has no ideology, or what's the point?"

Forbes tried to make a stand in Iowa, where McCain wasn't competing, but when he failed to pull off an upset there, his candidacy evaporated, cementing New Hampshire as a one-on-one contest between Bush and McCain -- with McCain scoring a 19-point landslide that turned him into an overnight national star.

Nothing better illustrated the bizarre, upside-down nature of the '08 GOP race, in which there was no obvious front-runner and five candidates reached the fall of 2007 vying for the top spot in national polling, than the surprise decision of the Union Leader to embrace a candidate it had once portrayed as a model apostate. But what choice did the paper have? Rudy Giuliani was disqualified by his cultural liberalism, Mitt Romney's moderate Massachusetts paper trail rendered him untrustworthy, economic "liberalism" did the same for Mike Huckabee, and late-starting Fred Thompson was putting audiences to sleep and slowly fading from contention. With this competition, McCain was able to earn a reassessment from the Union Leader, which found reason to support him in his unwavering support for the war in Iraq and George W. Bush's surge strategy.

“Simply put, McCain can be trusted to make informed decisions based on the best interests of his country, come hell or high water,” McQuaid's November 30 editorial argued.

Because the GOP race was so unsettled, this was probably one of the Union Leader's most significant primary season endorsements. At the time, McCain was slowly regaining his standing as a serious contender after pundits had written his campaign off during the summer. If there was going to be a real McCain comeback, New Hampshire, where he'd won 49 percent in 2000, would be key to it. So the timing of the endorsement was particularly helpful for McCain. It also probably helped him fight off Romney, who was then the New Hampshire front-runner and was frantically staking out turf to McCain's right. When Romney suffered a nine-point loss to Huckabee in Iowa, New Hampshire became a survival competition between him and McCain -- and with the Union Leader's help, McCain pulled out a five-point win that put him on course to win the nomination.