And then there were two

With the Cain train off the tracks, Newt Gingrich emerges as the official Not Mitt Romney. Can he win? 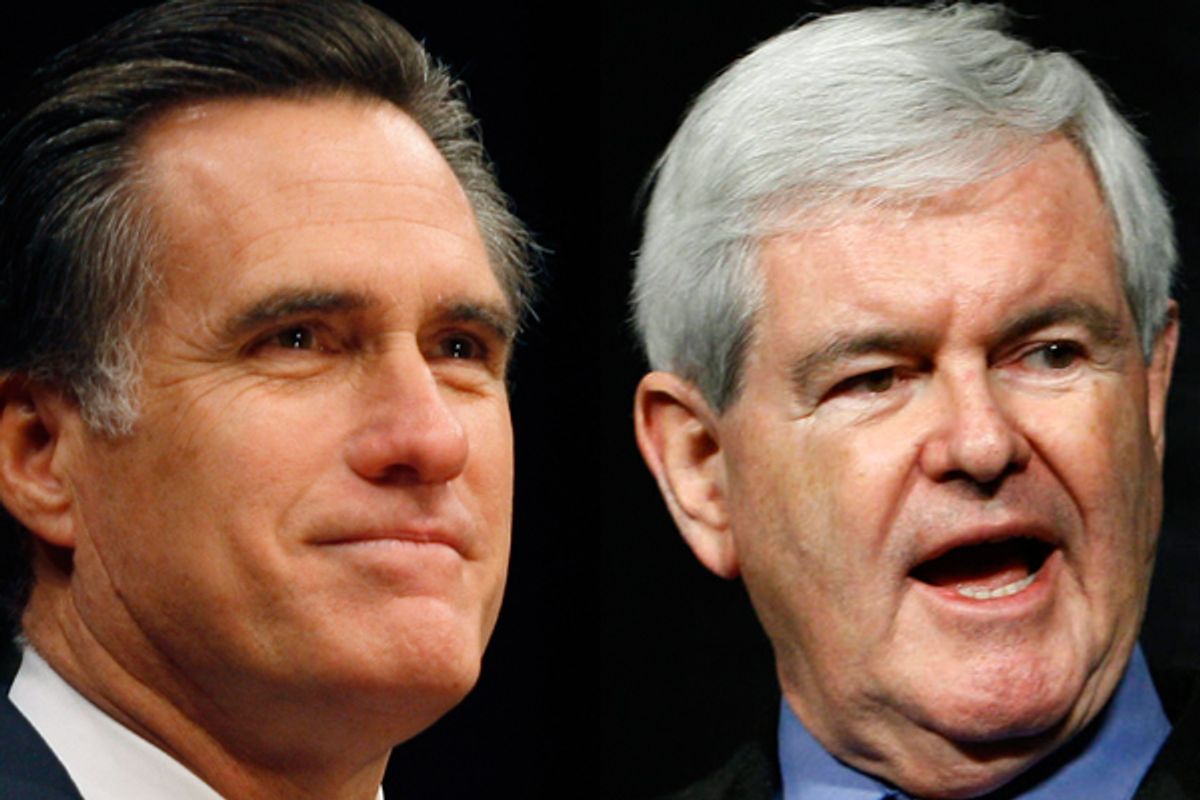 Herman Cain's campaign was already going down under the weight of sexual harassment charges, as well as his own foreign and domestic policy ignorance. But the news that an Atlanta woman says she had a 13-year affair with the married Cain officially makes him just a punch line, not a presidential candidate. (Yes, some people can be both, but not Cain.)

We've been waiting for months for the race to narrow itself to Mitt Romney and the not-Mitt candidate, and it looks like it's going to be Newt Gingrich. His strong debate performance last week combined with the endorsement of the Manchester Union Leader this weekend means he's unlikely to rise and fall in GOP polling as rapidly as Cain or earlier not-Mitt candidates Rick Perry or Michele Bachmann. No one else is likely to rise to challenge him. Huntsman is too moderate (and Mormon) to be not-Mitt, and Ron Paul is too eccentric for Tea Party Astroturf types to get behind. Rick Santorum is Rick Santorum.

So goodbye, Herman Cain. I said the minute Cain began to trash his accusers that it would backfire on him, and it did. White says she only came forward because she saw the other women being mistreated. "It bothered me that they were being demonized, sort of, they were treated as if they were automatically lying, and the burden of proof was on them," White told Atlanta's Fox5. "I felt bad for them." I feel bad for Cain's wife. It's worth noting that while Cain denies the affair to CNN, his attorney basically didn't, issuing this not-terribly-helpful statement:

Rather, this appears to be an accusation of private, alleged consensual conduct between adults - a subject matter which is not a proper subject of inquiry by the media or the public. No individual, whether a private citizen, a candidate for public office or a public official, should be questioned about his or her private sexual life. The public's right to know and the media's right to report has boundaries and most certainly those boundaries end outside of one's bedroom door.

The fact that Cain's womanizing is going to help Gingrich, the serial adulterer, is beyond ironic. But whatever people think of Gingrich's cheating on his first two wives, at least he's admitted it; in fact, it's become part of his Catholic convert redemption tale. Just Monday he told an interviewer:  "I think anybody who is honest about it knows that no person except Christ has ever been perfect. I don’t claim to be the perfect candidate. I just claim to be a lot more conservative than Mitt Romney and a lot more electable than anybody else." It's classic Gingrich, comparing himself to Jesus Christ with faux-humility. But it's possible Gingrich's redemption story will ease some voters' concerns about his character.

The real question is, when will Romney begin to fight back? Early in the campaign I wrote about what I thought was an effective, if dishonest, Romney ad attacking President Obama for the nation's high unemployment rate. Romney's been ignoring his GOP rivals from on high, letting Rick Perry punch himself into exhaustion as the Cain Love Train goes off the tracks. But if the Tea Party right begins to coalesce around Gingrich, Romney may find himself in trouble. It's been clear in every poll, since the beginning of the campaign, that the right-wing not-Mitt candidates had far more support than Romney, who tends to max out in the high 20s. As long as they fought among themselves, he seemed safe, but if one emerged, it was clear he'd have a battle on his hands.

It looks like one has emerged. With six weeks until the Iowa caucuses, no one else has time to heat up – or reheat. Will Romney go on the attack? There's plenty for him to hit Gingrich on. He can neutralize Newt's complaints about his flip-flops with the long roster of Gingrich's own, from the individual mandate to the Paul Ryan budget to climate change. He's got a lot to work with in Gingrich's well-documented history enriching himself via crony capitalism, which Sarah Palin and the Tea Party purport to oppose.

This race is about to get interesting. I'll be discussing the latest on Cain, Gingrich and Romney on MSNBC's "The Ed Show" at 8 ET.