How Newt is channeling "The Producers"

Like a certain Max Bialystock production, his campaign is succeeding despite its seemingly suicidal design 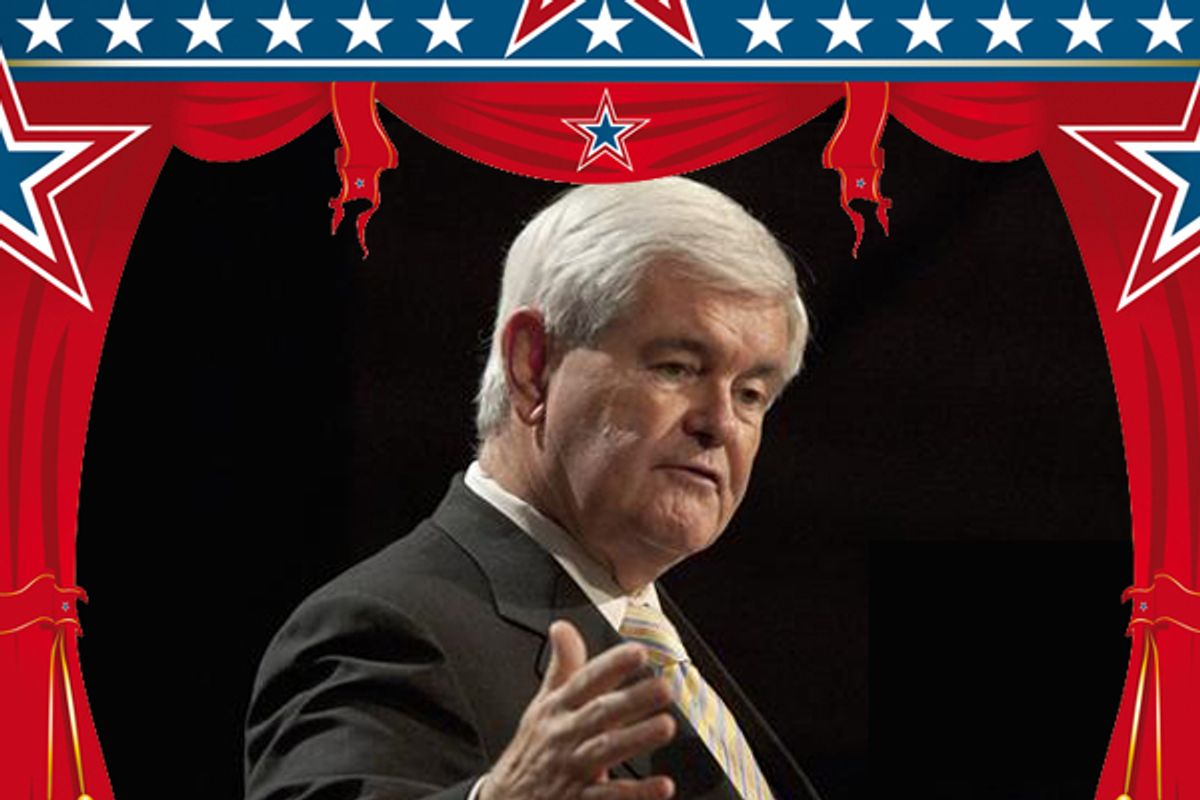 We may be witnessing the political world’s answer to “The Producers,” the Mel Brooks musical about an avaricious showman who concocts a sure-to-flop production that somehow turns into the surprise hit of the season. It’s called the Newt Gingrich presidential campaign.

The former House speaker has rocketed to the top in national GOP polling, and with only weeks remaining until the Iowa caucuses he now has an opportunity to cement his status as the conservative movement’s designated alternative to Mitt Romney. In a month full of breakthroughs for him, Gingrich scored his biggest coup yet over the weekend, when the Manchester Union Leader awarded him the most coveted newspaper endorsement on the Republican side.

What’s so fascinating about this -- besides the simple fact that a 68-year-old man who as House speaker racked up some of the most poisonous poll numbers ever seen and who left politics in disgrace 13 years ago has at least temporarily positioned himself as his party base’s last best hope for 2012 -- is that it’s still unclear whether Gingrich ever intended to run a real presidential campaign.

In fact, the evidence, at least until now, has been fairly compelling that he was mainly attracted to a White House bid because of its lucrative brand-building potential.

This would explain why, for instance, Gingrich thumbed his nose at staffers who pleaded with him to focus his energy on fundraising, organization-building and aggressive campaigning in key early primary states, the traditional building blocks of a serious candidacy. Instead, he opted for a leisurely mix of book-signings, screenings of Gingrich-produced videos, and recreational activities with this wife, prompting those same staffers to quit en masse.

That he’s frequently used the televised debates to promote those same books and videos (all of which are available for purchase through his campaign website) only bolsters this impression. So does the fact that a brand-building fake campaign would seem consistent with the quest for wealth that has seemingly defined his post-House career; as the Washington Post detailed on Sunday, Gingrich created “a for-profit collection of enterprises that generated close to $100 million in revenue over the past decade” and that allowed him to claim $2.5 million in income last year – not bad for a man who in 1997 was forced to accept a personal loan from Bob Dole to pay a $300,000 ethics fine leveled against him by his House colleagues.

In fact, as of this past August, when he was barely registering in polls and the political world was still laughing at him for his staff defections, vacation habits and exorbitant Tiffany’s credit line, Gingrich was openly telling Republicans that he didn’t believe he had a chance of winning the Republican nomination, but that he was intent on staying in the race anyway.

But, sort of like Max Bialystock’s “Springtime for Hitler,” the Gingrich presidential campaign is now succeeding brilliantly in spite of its apparently suicidal design. That it’s come to this says something about the deeply flawed nature of the ’12 GOP field, something about Gingrich himself, and something about how the Republican campaign process seems to be evolving.

Gingrich’s moment, after all, wouldn’t be possible without the Tea Party-era GOP base’s profound lack of interest in anything or anyone that smacks of establishment Republicanism, and its thirst for ideologically pure outsiders. This has prevented Romney, despite being generally well-liked by Republican voters, from climbing past 25 percent in national surveys, even as the political world has treated him as the inevitable nominee. And it’s allowed one non-traditional candidate after another to spring up in the polls and vie with him for the lead. Gingrich had to wait a long time for his turn, as surges for Donald Trump, Herman Cain, Michele Bachmann, Rick Perry and Cain (again) came and went. Each one of them wilted under the scrutiny that comes with front-running poll numbers, but none of their supporters ever seemed to defect to Romney.

When his turn came this month, Gingrich was more prepared. As front-runners, Perry and Cain delivered debate performances that ranged from underwhelming to dreadful, with Perry making a fool of himself and Cain fading into the background with little to say. By contrast, Gingrich showed himself in last week’s debate to be a master of political performance art (at least for an audience of conservative Republicans), projecting confidence, authority and even wonkishness (however deceptive this perception might be), while deftly addressing potential vulnerabilities. Gingrich has more than his share of self-destructive tendencies, and they may well doom him in the weeks ahead, but for now the GOP spotlight seems far more agreeable with him than with the other non-Romney candidates.

The other key to Gingrich’s rise is the changing nature of the GOP race. The process seems more nationalized now than ever before, with cable news, viral videos, blogs and – above all – televised debates that have attracted huge audiences offering Republican voters and activists across the country an opportunity to take the measure of each candidate without ever attending a campaign event, watching a campaign ad, or being contacted by a campaign worker.

Just consider this observation from J. Ann Selzer, who runs the widely respected and nonpartisan Iowa poll for the Des Moines Register, about what the ’12 race has looked like on the ground in the first-in-the-nation caucus state:

What's different is -- and maybe this will change in the next month -- [in past cycles] you had this feeling of candidates here, kind of a pulse of their supporters, lots of public events. You felt things happening. I haven't felt that at all [this year]. You look at the number of candidate days here, it's really small. The way that they're campaigning is very different. We have all of these debates that have been very high-profile. It's a different campaign.

Selzer went on to note that the only Republican candidate who’s been waging a traditional Iowa campaign is Rick Santorum – who also happens to be the only Republican candidate who has never experienced any kind of surge or mini-surge in any kind of poll this year. Meanwhile, Gingrich has managed to attain polling heights that even Romney hasn’t been able to reach despite having (until recently) practically no cash, no campaign infrastructure, and no meaningful endorsements.

Who knows, maybe this is all the result of a brilliant plan that Gingrich has been faithfully executing and that no one else was smart enough to appreciate. But it seems much more likely that Gingrich’s candidacy is the perfect expression of the absurdity of modern Republican politics: He set out to sell some merchandise only to accidentally discover that he had the perfect formula for a credible campaign in the Tea Party-era.