How the pope made Barney Frank's political career 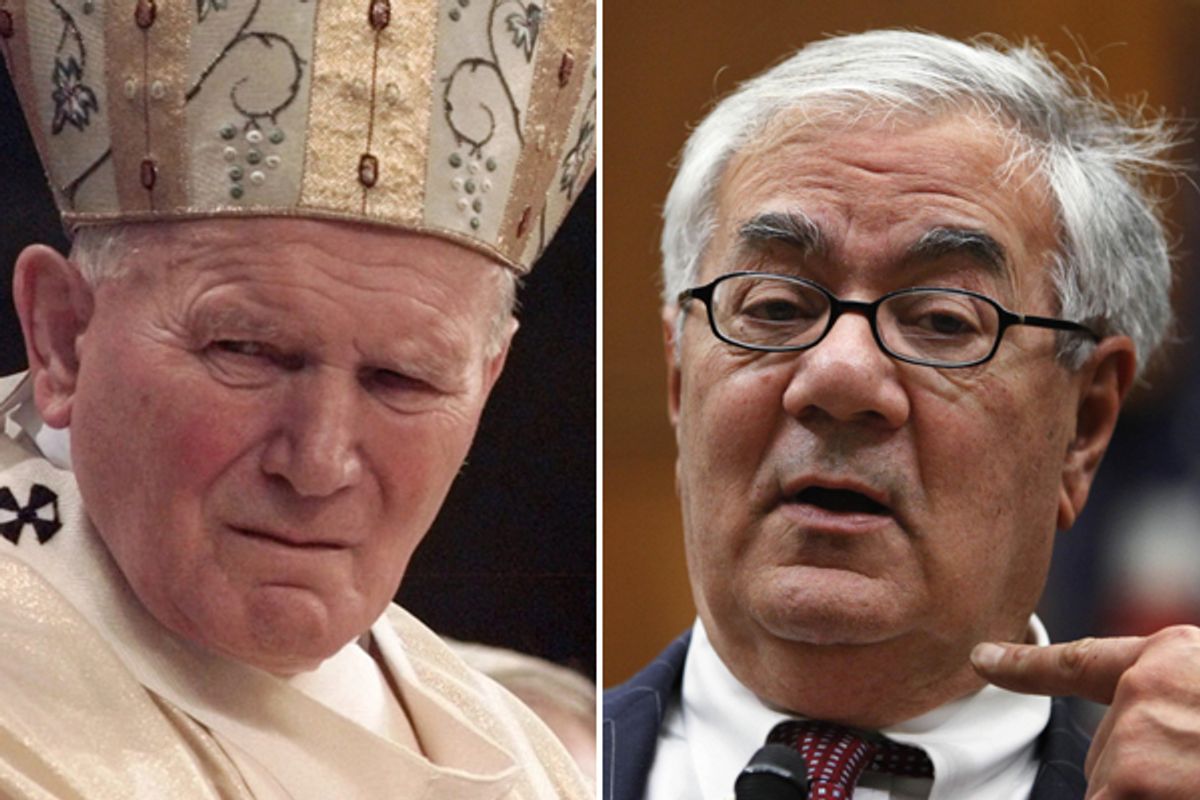 Barney Frank is putting an end to what has been an unusual House career. The Massachusetts Democrat, who is expected to formally announce his retirement Monday afternoon, has served in the chamber for 16 terms without ever seeking or attaining an official party leadership post. He also never ran for higher office. And yet, he still became one of the most enduringly visible figures in national politics -- a genuine liberal icon and a favorite punching bag for conservatives.

There are many reasons Frank was able to do this, his intellect, quick wit and his flair for verbal jousting among them. That he became the first member of Congress to publicly acknowledge that he's gay and was at the center of a late-'80s sex scandal certainly boosted his name recognition, if nothing else. But the most essential -- and generally overlooked -- contribution to his rise to national prominence came from a very unlikely source: the pope.

It was on May 4, 1980, that John Paul II, then less than two years into his papacy, issued a decree banning all American priests from serving in elected office. In reality, the order was directed at one particular priest: Robert Drinan, a fiercely liberal Jesuit who had been representing a suburban Boston district in the U.S. House since 1970.

Drinan, who had been an outspoken critic of the Vietnam War and was a leading Nixon critic during the Watergate saga, was locked in something of a power struggle with Humberto Medeiros, the culturally conservative archbishop of Boston. Medeiros resented Drinan's left-wing politics, in particular his votes in favor of public funding for abortions, and pressed Rome to rein in the priest. Previous popes had been content to look the other way on the question of political activism by priests, but in John Paul II Medeiros apparently found a receptive audience, resulting in the May 1980 order. When Drinan's petition for a waiver was denied, he had no choice but to heed the pope's order and announce that he wouldn't seek reelection that fall. He was only 59 at the time and ended up living until 2007; without papal intervention, he might have stayed in the House for decades longer.

It was at this point that Frank, then a 40-year-old state legislator from Boston (where he'd once been an aide to Mayor Kevin White), saw an opportunity. His Boston address wasn't in the 4th District, but he moved a few miles west to an apartment in Newton and launched a campaign to replace Drinan. Frank's liberalism and reformer reputation won him Drinan's endorsement and made him a perfect fit for about half of the strongly Democratic district -- affluent, educated communities like Brookline and Newton. His grip on the liberal vote improved when John Kerry, then a Middlesex County prosecutor still nursing his wounds from a failed 1972 congressional campaign, declined to run.

But the 4th District also included its share of blue-collar cities and towns, places filled with obedient Catholics who shared Medeiros' cultural conservatism. Thus did the cardinal see an opportunity of his own. Just days before the September primary, he penned a letter that all but endorsed Frank's main Democratic primary foe, Arthur Clark, the pro-life mayor of working-class Waltham, instructing Catholics that they had a duty to use the ballot box "to save our children, born and unborn."

"Those who make abortion possible by law -- such as legislators and those who promote, defend and elect these same lawmakers -- cannot separate themselves from that guilt which accompanies this horrendous crime and deadly sin," the letter, which was read by priests at Sunday mass in over 400 eastern Massachusetts churches, declared.

The extraordinary intervention, archdiocese officials made clear, was aimed at Frank and James Shannon, a pro-choice Catholic who was representing the Lowell-area 5th District. The church turned up the heat on Drinan too, with 80 of his fellow priests publicly calling on him to rescind his endorsement of Frank. Drinan refused. Medeiros effectively turned the primary into a referendum on abortion, and with nearly half of the 4th District's voters identifying themselves as Roman Catholics, it made defeat for Frank very possible.

He survived, though, eking out a 50-48 percent win over Clark. From there, he survived a closer than expected general election contest against Richard Jones, a dentist and conservative activist; the divide that Medeiros had created evidently lingered through the fall campaign. Frank had to fight for his life again in 1982, when redistricting merged his district with that of Republican Rep. Margaret Heckler, but after winning that race decisively, his hold on the 4th District was never seriously threatened, not even after the '89 sex scandal that resulted in a reprimand by his House colleagues. After 1980, Frank's closest race ended up being his last one, when he beat Republican Sean Bielat by just 10 points.