Teen to Sam Brownback: You suck

When a Kansas teen tweeted her dislike of the state's conservative governor, she caused a national incident 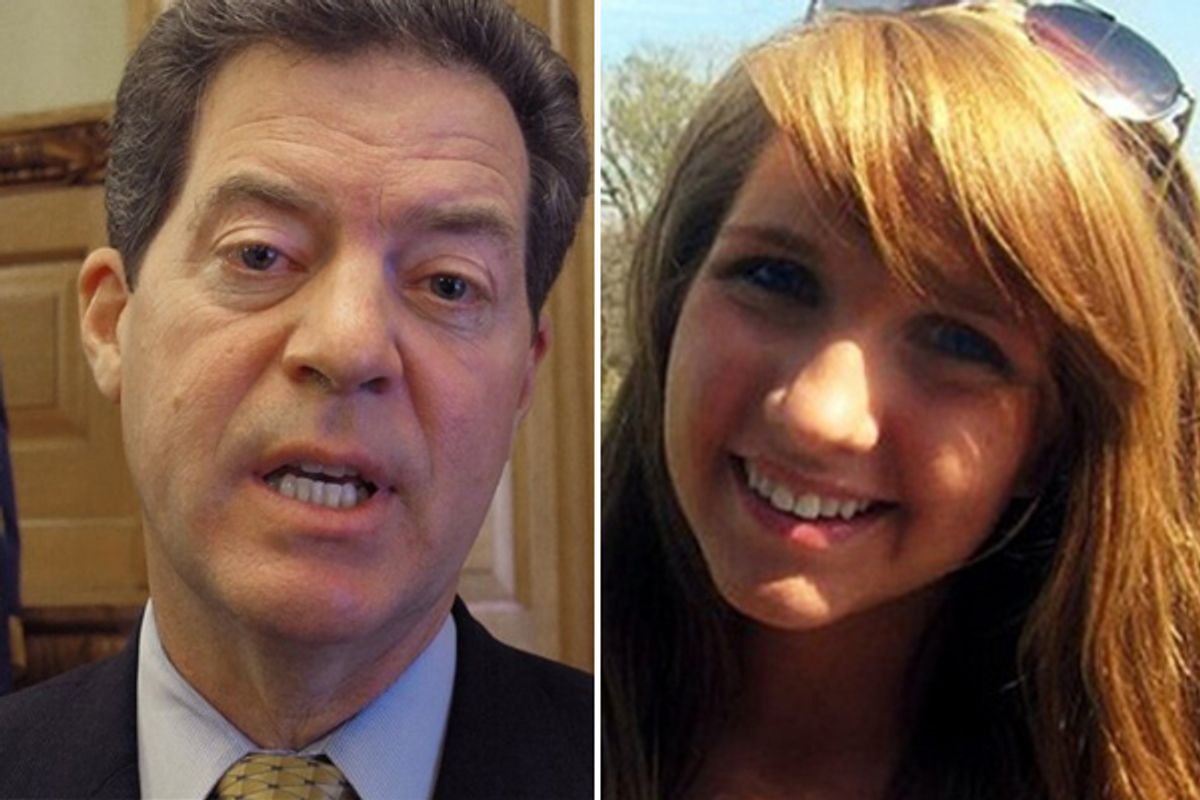 Emma Sullivan doesn't have the fiery rhetoric of a Paul Krugman or Rachel Maddow's comprehensive grasp of the issues. She isn't Keith Olbermann or even Howard Kurtz. She's a high school senior in Kansas, a young woman just eligible to vote. But her political commentary has nonetheless created a firestorm way beyond Shawnee Mission East school.

Last week, during a Kansas Youth in Government field trip, Sullivan watched Gov. Sam Brownback speak. Unmoved, she cavalierly tweeted to her roughly 65 followers, "Just made mean comments at gov. brownback and told him he sucked, in person #heblowsalot." A teenager tweeting that her governor "sucks" and "blows" – "a lot"? Sounds like grounds for an incident of national proportions!

Sure enough, Brownback's office – the Thin Skin Division -- noted Sullivan's tweet, and contacted Youth in Government. As Sherriene Jones-Sontag, Brownback's communications director, explained to the Kansas City Star, "That wasn’t respectful. In order to really have a constructive dialogue, there has to be mutual respect." She added, "It was important for the organization to be aware of the comments their students were making."

Sullivan was soon called into the principal's office, where she says she received a one-hour scolding on her "not so nice" behavior and told she needed to do "damage control" in the form of a letter of apology. Oh, but the damage was just beginning.

You see, the girl, who didn't even meet Brownback -- let alone tell him to his face that he sucks -- isn't sorry. Nor does she feel the need to offer a hollow apology. Instead, she tweeted Sunday, "I've decided not to write the letter but I hope this opens the door for average citizens to voice their opinion & to be heard!" Suddenly, #heblowsalot is the hashtag to beat.

It's quite likely that Jones-Sontag read the original tweet, jumped to the hasty conclusion that a confrontation had occurred, and decided to take swift action. And had Sullivan been truly disruptive and abusive during a school event, organizers would be entitled to know. But she wasn't, and that makes Jones-Sontag and principal Karl R. Krawitz look increasingly absurd for getting whipped up over the blithe tweets of a teenager. Jones-Sontag could have backed up and said, "We misread the events. We never demanded an apology. And differences of opinion are what makes this country great." But she didn't. So now it's a big deal, one that pits a mouthy adolescent's right to say her governor sucks against a bunch of adults who'd prefer she didn't.

Were I Sullivan's parent or principal, I would be none too thrilled with her behavior. When my daughter was assigned the role of Paul Ryan last year for a fifth-grade project on the budget – Paul Ryan! -- this bleeding-heart liberal was nonetheless proud of the serious, thoughtful way in which she and her classmates approached the issue and communicated directly with Ryan's office. Philosophical differences don't have to get in the way of good manners. Sullivan was a guest of the governor's office, and as such, surely could have restrained her Twitter finger. Jones-Sontag is correct that Sullivan wasn't behaving respectfully. And Sullivan's own mother admits the girl "could have chosen different words." But, and this is crucial, she also understands that "If she wants to tweet her opinion about Governor Brownback, I say for her to go for it and I stand totally behind her.'

In retrospect, it's pretty funny that Jones-Sontag proclaimed last week that "It's important for students to recognize the power of social media, how lasting it is. It is on the Internet." It sure is, communications directors and school principals. Sullivan, who says she was "just joking with friends," has seen her Twitter following swell to over 7,000 followers. And a petulant outburst has now become a full-blown news story.

Sullivan told CNN Sunday that "I don't think it would be the best move for me" to write a letter she didn't believe in. But though she's comfortable expressing the plain-spoken ideology that her governor blows, Sullivan's political perspective is sharper and more articulate than that. "The issue is relevant," she told CNN, "and, if anything, is a starting point of dialogue with the governor about his policies and how our First Amendment rights can be taken away." Now she'd like to have a conversation with Brownback, though she says, "I don’t know that he would listen to what I have to say." And while it would appear that Sullivan might not have been listening to Brownback last week, some of his message must have made it through. Addressing the students, Brownback encouraged them to "be active in their government, community and public service." Little did he know that at that moment, a free speech activist was being born.

Update: Do not screw with social media and defiant 18 year-olds. First, Sullivan's district issued a statement Monday saying it had "reviewed recent events surrounding the reported tweet by Shawnee Mission East High School student Emma Sullivan" and "acknowledges a student's right to freedom of speech and expression is constitutionally protected." Then, after a week of silence, Sam Brownback himself issued a statement. "My staff overreacted to this tweet and for that I apologize," he said Monday. "Freedom of speech is among our most treasured freedoms.... I enjoyed speaking to the more than 100 students who participated in the Youth in Government Program at the Kansas Capitol. They are our future. I also want to thank the thousands of Kansas educators who remind us daily of our liberties, as well as the values of civility and decorum." Sullivan's admittedly "mean" comments may not have earned her high points for civility, but by getting both her school and the office of the governor to back off, she proved that decorum also involves not overreacting to what people say about you on Twitter. And that liberty means being able to tell your leaders they blow.