Was Dominique Strauss-Kahn set up?

For conspiracy theorists, it's easier to believe in secret phone calls and a "victory dance" than sexual assault 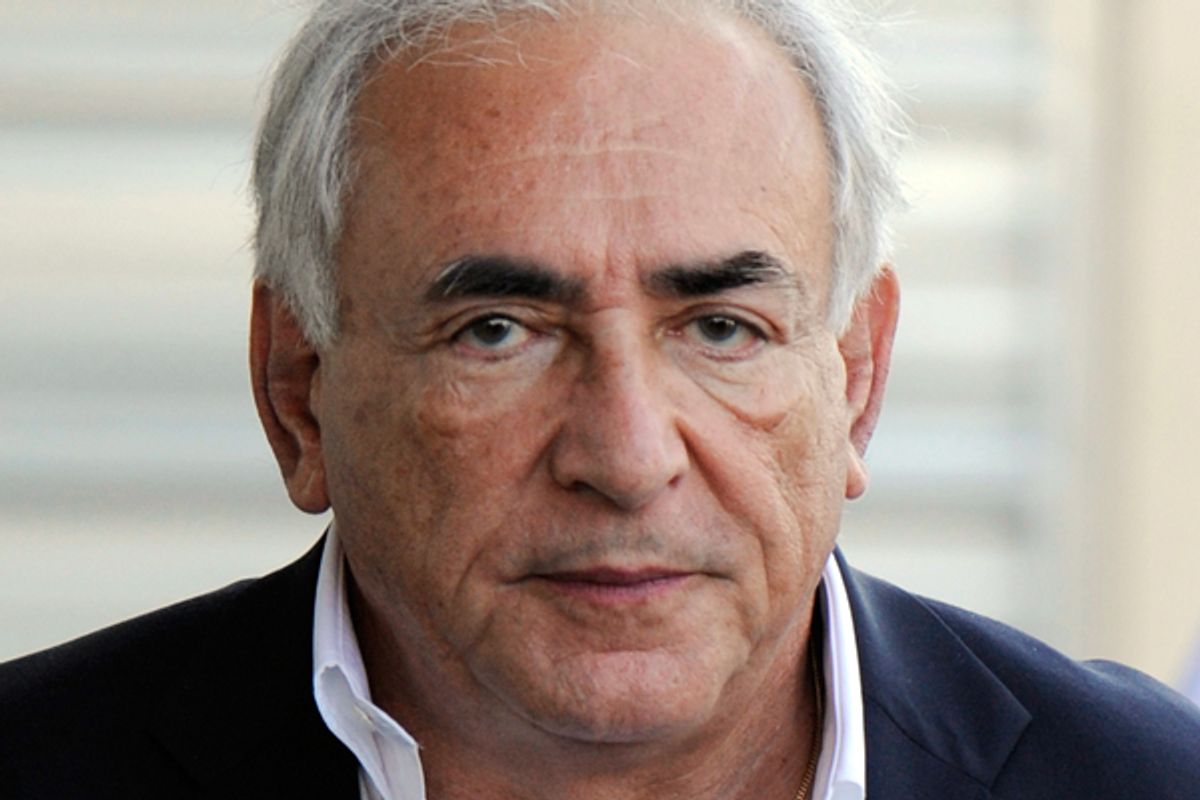 It is, apparently, far easier to believe many things -- or at least to suggest them -- than it is to believe that Dominique Strauss-Kahn sexually assaulted a maid at the Sofitel in New York on May 14.

That includes believing, for example, that there is a conspiracy afoot that all of Strauss-Kahn's resources and lawyers and investigators have been unable to definitively unearth, but that Edward Jay Epstein, writing in the New York Review of Books and the Financial Times, can help us glimpse, even if he won't spell it out entirely. (The criminal case against DSK collapsed because of the prosecutor's doubts about the accuser's credibility; her civil case is pending.)

The problems begin with the passive headline, "What happened to Dominique Strauss-Kahn?" and the declaration that "May 14, 2011, was a horrendous day" for DSK. It cannot be denied that it's very unpleasant to be arrested for sexual assault and attempted rape, even for a man less famous than DSK. But you could also argue that it's even more unpleasant to be allegedly sexually assaulted by a wealthy and powerful man, which is Nafissatou Diallo's side of the story.

Why should we believe that something happened to DSK as opposed to him doing something? Epstein never offers a coherent alternative theory of what happened at the Sofitel, only an exhaustive timeline, a diagram and a series of mysterious details that may add up to nothing at all. Those details include Diallo visiting another room after the encounter, with no details known about its occupant; the Sofitel's unexplained delay in calling the police, and a silent victory dance of three men caught on camera.

The timeline reveals that the encounter took place in a time frame of six to seven minutes -- just after Diallo entered the room, just before DSK chatted on the phone with his daughter. (The piece doesn't ask the coarser, biologically puzzling question of how a 62-year-old man was able to initiate and complete the act so quickly.) Epstein doesn’t mention injuries logged in a medical report cited by Diallo’s lawyers (DSK's lawyers contested it, saying the injuries described were self-reported or could have been from consensual sex), but he does mention how tall she is. (She is taller than DSK.)

What happened in those six to seven minutes besides DSK's semen getting mixed with Diallo's mouth? He has never had to publicly offer an explanation, even if he can't deny it happened. Maybe she was irresistibly seduced by him in those minutes. Maybe a transaction was negotiated, except that Diallo's lawyers were confident enough that it wasn't to sue the New York Post for libel after it printed anonymous reports that Diallo was working as a prostitute. Or maybe he sexually assaulted and tried to rape her. As hard as these things are to imagine in a world of mysterious victory dances, they do happen. Even to women who get confused about the timeline, or who have lied about rape to get a green card.

Epstein makes much of the disappearance of DSK's IMF BlackBerry. A "researcher" at the rival party who somehow has reliable access to such information has told DSK by text (to which Epstein inexplicably has access too) "that at least one private email he had recently sent from his BlackBerry to his wife, Anne Sinclair, had been read at the UMP offices in Paris. It is unclear how the UMP offices might have received this email, but if it had come from his IMF BlackBerry, he had reason to suspect he might be under electronic surveillance in New York." Except that there was no need to have DSK surveilled in New York in order to access his email -- an enterprising hacker could have hacked into the server without any access to the physical device.

Epstein asks us to believe this without a single named source or any contextualizing information about his unnamed ones, although it's plausible DSK's attorneys and investigators would have been the ones with all this information. For example, Epstein has viewed the cellphone records of the hotel parent Accor’s head of security, who called someone else at the company on his way to deal with the situation at the Sofitel. That someone could be anyone at Accor ... but maybe it’s his “ultimate superior” who was at a soccer game seated in French president Nicolas Sarkozy’s box at the time. Or maybe it was someone in between them in the line of command? This is one of those details that could say a lot, but so far seems to say very little at all.

He has also viewed surveillance video from the hotel wherein two men, one of them the hotel’s chief engineer, seemingly an American, “high-five each other, clap their hands, and do what looks like an extraordinary dance of celebration that lasts for three minutes.” That is a long dance. Does it have anything to do with bringing down DSK? Actually, the hotel, which dismisses Epstein's account, says it was only an eight-second dance and that it probably was about sports. Accor also denies that there is any significance to Diallo going to another room on the floor after the assault, another Epstein trial balloon, because the guest there had already checked out. (She originally omitted mention of the second visit.) Maybe she went there for a quiet place to process what happened. Or even to clean it!

The Washington Post says the story has set the “French political world afire,” while the Economist terms the reaction a “shrug,” because DSK is now tarnished by his alleged involvement in a prostitution scandal in Lille. Which shadowy opposition set up that conspiracy?