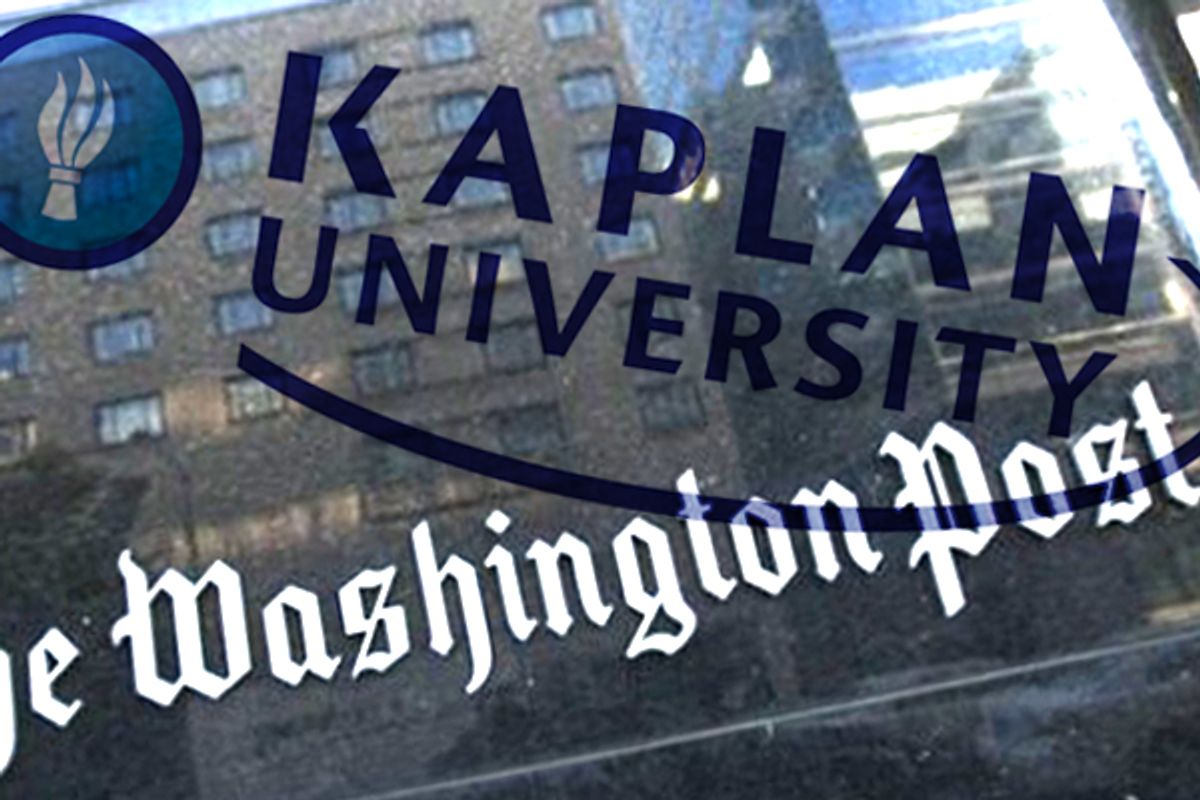 Jay Mathews, the Washington Post's education columnist, writes a blog for the paper's local section that is mostly about Washington, D.C.-area school news and politics, though he also writes thoughtfully on national education policy questions. Here is his challenge, though: A vital revenue source for the Washington Post Co. is Kaplan Inc., a test-prep company that branched out into owning and running for-profit online colleges. For-profit colleges, as Mathews knows, are a huge rip-off, targeting poor and minority students with deceptive and aggressive marketing, then burying them in loan debt and barely graduating anyone. The for-profit college sector has come under fire from the government for basically being an elaborate scheme to reap government-subsidized loan money, and the industry has responded with a massive, well-funded lobbying and public relations campaign. This post that Mathews published yesterday seems depressingly like a part of that campaign.

It is headlined "5 reasons for-profit colleges will survive," and it seems like the author isn't particularly thrilled to be writing it:

Enter Andrew S. Rosen, Kaplan’s chairman and chief executive officer, with a new book called “Change.edu: Rebooting for the new talent economy.” Who does Rosen think he is, extolling the virtues of for-profit schools while his company faces such threats?

I wasn’t sure I wanted to read the book or write about it. As a 40-year employee of The Post, anything bad I say might seem too little too late, and anything good would be taken as trying to protect the company. I was glad Rosen agreed his company had messed up. He did not shake my feeling that profits and teaching are a bad mix, but I did learn things I needed to know.

Despite the industry’s troubles, Rosen convinced me that for-profit educational ventures are here to stay. People who feel as I do will have to adjust to that.

Emphasis mine. Then there are the five reasons, which basically read like they came directly from a Kaplan press release. ("For-profit schools are less of a drain on tax dollars than non-profit or public schools.") From this specific press release, perhaps.

It's the tone of a sort of strongly encouraged attitude-adjustment that makes this whole thing even more depressing than the usual defensive for-profit college propaganda that the Post editorial board publishes in the Opinion section. "People like me may want for-profits to disappear," Mathews writes, "but that is not going to happen." Well, his bosses certainly hope so!

Bonus sadness: This comment, which comes after a small torrent of anti-Kaplan vitriol: Maybe this wasn't an assignment from on high, but it certainly looks like corporate press materials forced on a skeptical columnist.