What to expect from Egypt's elections

As the first round of voting begins, we look at who's running and whether the military will actually step down 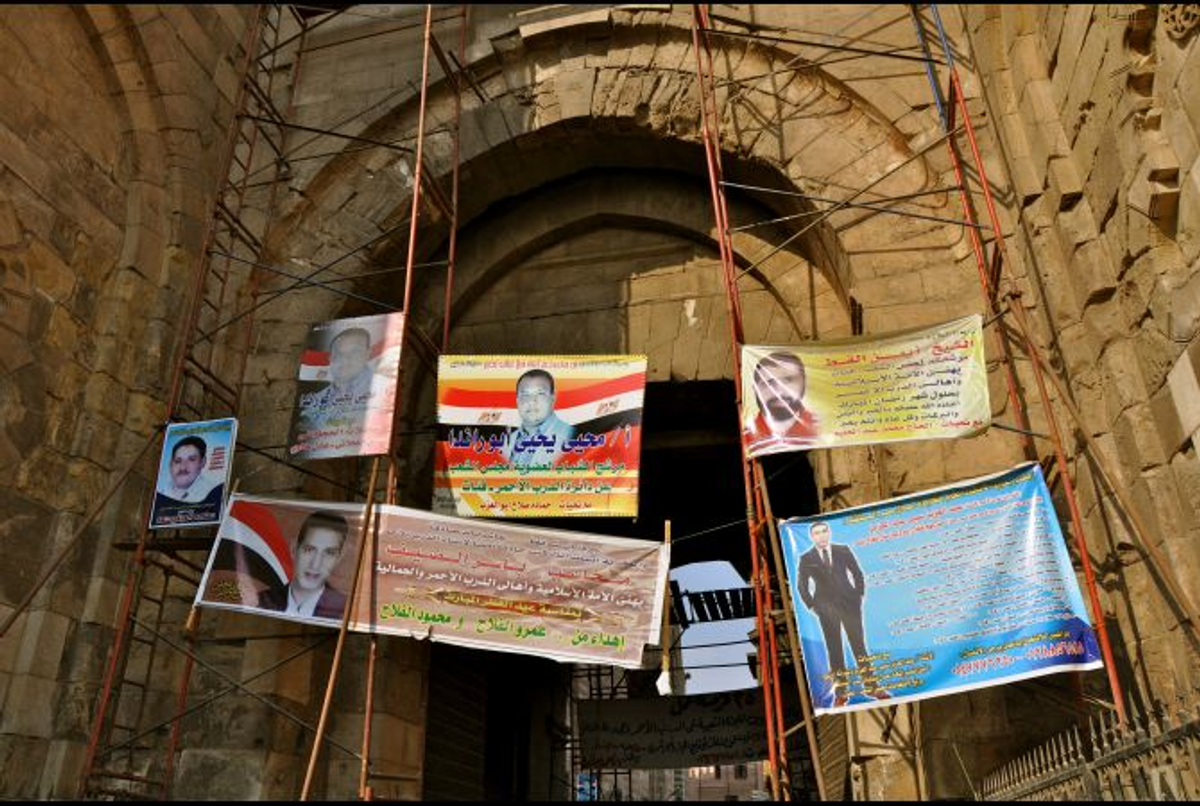 CAIRO – In the aftermath of a week of violent protests in Tahrir Square, Egyptians head to the polls Monday hoping to take a step closer to establishing a new democracy.

A protest movement in January may have led to the ouster of former president Hosni Mubarak, but most Egyptians are left wondering how much has actually changed. Were the heady days of street demonstrations truly a revolution or a popular uprising that has resulted in a military takeover?

Political reform has moved at a snail's pace. Some of the most brutal hallmarks of Mubarak’s autocratic regime have returned, including arbitrary detention, military trials and torture.

And an already stagnating economy is deteriorating amid ongoing workers’ strikes and sporadic violence.

Many now blame the country’s ruling military leaders, the once revered Supreme Council of the Armed Forces (SCAF), which assumed power in the transition following Mubarak’s departure.

“We are all united with one hand against the military,” said Ahmed Gheith, a 22-year-old Muslim Brotherhood member who was at a recent protest in Cairo's Tahrir Square. “Egyptians should be able to choose whomever they want to lead our country.”

For the most part, Egyptians are optimistic that the final stage of their revolution will take place at the ballot box. The hope is that these elections will be a departure from the Mubarak-era, when voting was often marred with violence, ballot box stuffing, and other fraudulent activities.

But at the first polls on November 28, they will encounter a new electoral process that observers have called convoluted, confusing and mismanaged.

About half of Egypt’s population of more than 80 million residents are eligible to vote in the upcoming elections.

Voter turnout is expected to be much higher than in any election during the Mubarak regime. Earlier this year, a record 40 percent of Egyptians over the age of 18 voted in a referendum on amendments to the nation’s current interim constitution.

There will be elections for both houses of Egyptian Parliament in 2011 and early next year — the People’s Assembly, or lower house parliament, and the Shura Council, or upper house.

Egypt's next parliament will nominate a constituent assembly that will one day write the nation's new constitution.

The People’s Assembly (PA) election will consist of three phases across Egypt’s 27 governorates, and will take nearly two months to complete.

The first round begins on Nov. 28, and will take place in Cairo, the Fayoum oasis, Alexandria, Damietta, Kafr El Sheikh, Port Said, Assiut, the Red Sea in Sinai, and Luxor.

Each round of voting will take place over two days, according to new rules implemented by Egypt's transitional government only this weekend.

Voting for the Shura Council will begin shortly after the three rounds of PA have been completed.

A total of 498 seats are up for grabs in the upcoming PA election.

How the seats will be chosen has changed substantially since the Mubarak era, and has been the subject of much debate and confusion among political parties since the departure of the former president this year.

In past elections, individual candidates were elected from their parliamentary districts.

This year will feature a mixed-system election, including proportional representation party lists as well as individual candidates. Two-thirds of the PA’s seats will be chosen by party list plurality. The remaining third will come from independent candidates in a so-called ‘first-past-the-post system.’

Political parties are required to field at least one woman. From the individual candidates, at least half of the PA will be filled by “farmers and workers,” a throwback to a 1950s-era quota law.

The complex election laws of 2011 were implemented by SCAF, based mostly on recommendations from Egypt’s civil society and political groups as a way of leveling the playing field by reducing the likelihood of a sweep by remnants of Mubarak’s disbanded National Democratic Party (NDP). Mubarak’s former ruling political party maintains a large grassroots movement that was left mostly intact following the uprising.

But the result is a confusing system that will require each voter to submit multiple ballots on election day, possibly with long waiting periods in between for runoffs, according to the Washington, D.C.-based International Foundation for Electoral Systems.

The days of one-party victories swept by Mubarak's NDP are over.

This election, over 6,500 candidates are running from more than 45 political parties, many which were launched this year following the uprising. The entire political spectrum will be represented, from liberal seculars to Islamists to socialists.

The formidable parties include the Muslim Brotherhood’s Freedom and Justice Party, with its large grassroots base from years of charitable work in communities throughout the country.

Although the NDP has been dismantled, several remnants from Mubarak’s old party will be running as independents and as part of new parties.

A recent lawsuit attempted to directly bar the participation of former NDP members, one of the major goals of protesters in Tahrir Square.

Following the violent clashes in Cairo last week, SCAF issued a long-awaited "politcal corruption" law that bans anyone convicted of corruption from running for office.

The move, however, did not appease protesters. Most criticized the law for being too vague and coming too late.

Some members of Mubarak's former party are still on the ballots for at least the first round of voting, according to reports.

"As a people that made a revolution, we should be able to differentiate between the good and the bad; who is a regime remnant and so," said Abdel Rahman, "we are demanding freedom, we are choosing our representatives in the parliament, and we have the freedom to choose."

Currently, most experts predict substantial victories for both the MB and the NDP.

Ziad Akl, a researcher at Al-Ahram Center for Political and Strategic Studies, a state-funded think tank, said that remnants of the NDP could win a large plurality in the upcoming election.

Egypt’s revolutionary activists have made little headway with voters in the rural north and south of the country, according to Akl.

“My biggest fear is that these elections would result in a parliament that is 30 or 40 percent NDP,” said Akl.  “And that would not be a parliament reflective of revolution, yet it will be legitimate. Then we could have a real problem because you would have a state claiming legitimacy and a public claiming that this is not what we signed up for.”

When Egypt’s military rulers took power, they promised to hold “free and fair” elections within 6 months — one of the biggest demands of the protest movement in Tahrir Square.

But weeks before the once-delayed elections, several candidates have already come forward with evidence that Mubarak-era fraud is still present among some in the country. An "election market" of people who will rig votes, sell voting blocs, and even thugs-for-hire are all still present in Egypt, according to many observers.

Attempting to guarantee the legitimacy of the 2011 elections will be the judicial branch, one of the few institutions to maintain credibility among a majority of Egyptians.

Around 10,000 judges and other officials will be dispatched across the country to administer the vote.

Several local non-governmental organizations will also send members to polling stations to observe the vote. But many of these groups have criticized SCAF for limiting transparency in the voting process by denying them any real authority to report fraud.

Most foreign poll monitors have been barred from supervising the election. Shortly after taking power, SCAF denied all foreign observers except for one, citing the need to protect Egypt’s sovereignty.

“There is very bad management of this entire electoral process. It has been going on ever since the government released the legislation pertaining to how the elections would be run,” said Ghada Shahbandar, a former poll monitor and activist working at the Egyptian Organization for Human Rights.

Just over a month before the start of the PA elections, an Egyptian court ruled that its citizens living overseas should have the right to vote — a first for the country’s millions of expatriates, and a key demand of protesters in Tahrir.

But with so little time to prepare before the election, and with basic information about the methods of expat voting still undeclared, very few are confident that that the system will work.

The government does not maintain statistics on the number of Egyptians living abroad. Official figures place the number of expatriates at seven million, while some independent estimates are as high as 10 million.

"If Egyptians abroad are not given their chance to vote, it means that at least six percent of Egypt's population is deprived from their basic political rights," said Ahmed Ragheb, a lawyer and human rights activist.

Already, there have been numerous complaints about the electronic registration process for expatriates and the Egyptian government’s capacity to monitor and organize millions of potential votes overseas.

Even the government does not seem confident in the process. Just weeks before the historic court ruling, Judge Abdel Rahman told GlobalPost that it would be "impossible for Egyptians abroad to vote."

He said the preparations would be too complicated and time consuming with such a short period before the elections.

Will the army ever leave power?

SCAF has already delayed the parliamentary elections once this year. Logistical preparations by both candidates and administrators only started earlier this month. With the shortened process, and signs pointing to a desired lack of transparency, many critics believe that Egypt’s military will be unwilling to transfer power to a civilian government.

On November 18, with less than ten days before the election, tens of thousands of Egyptians returned to the streets of Tahrir Square to criticize military rule in Egypt.

More than nine months after the unfinished revolution, various political elements — mostly led by Islamist groups like the Muslim Brotherhood — all raised “one hand” to say no to the once-vaunted army.

The protesters' immediate concern was the so-called supra-constitutional document set forth by various political groups and SCAF, several months before the election. The document was meant to solidify certain principles “above” the constitution, in other words, certain inalienable rights that Egyptians would have regardless of which people from which parties come to power.

But the masses in Cairo's city center were challenging a SCAF amendment to the supra-constitional document that would cement the army's budgetary immunity into the future constitution, essentially bypassing oversight and accountability to the Egyptian people.

Loai Nagati was one of the protesters in Tahrir.

Nagati knows the perils of military rule better than most. The 22-year-old was one of more than 12,000 Egyptians who have been jailed and tried under secret military courts since the ouster of Mubarak. He said he was abused and tortured during the eight-day detention earlier this year.

“We want an end to military rule in Egypt, finally. In this election, hopefully we can show them that the country is refusing to give the army the ultimate power,” said Nagati.