The beguiling tough love of "Enlightened" 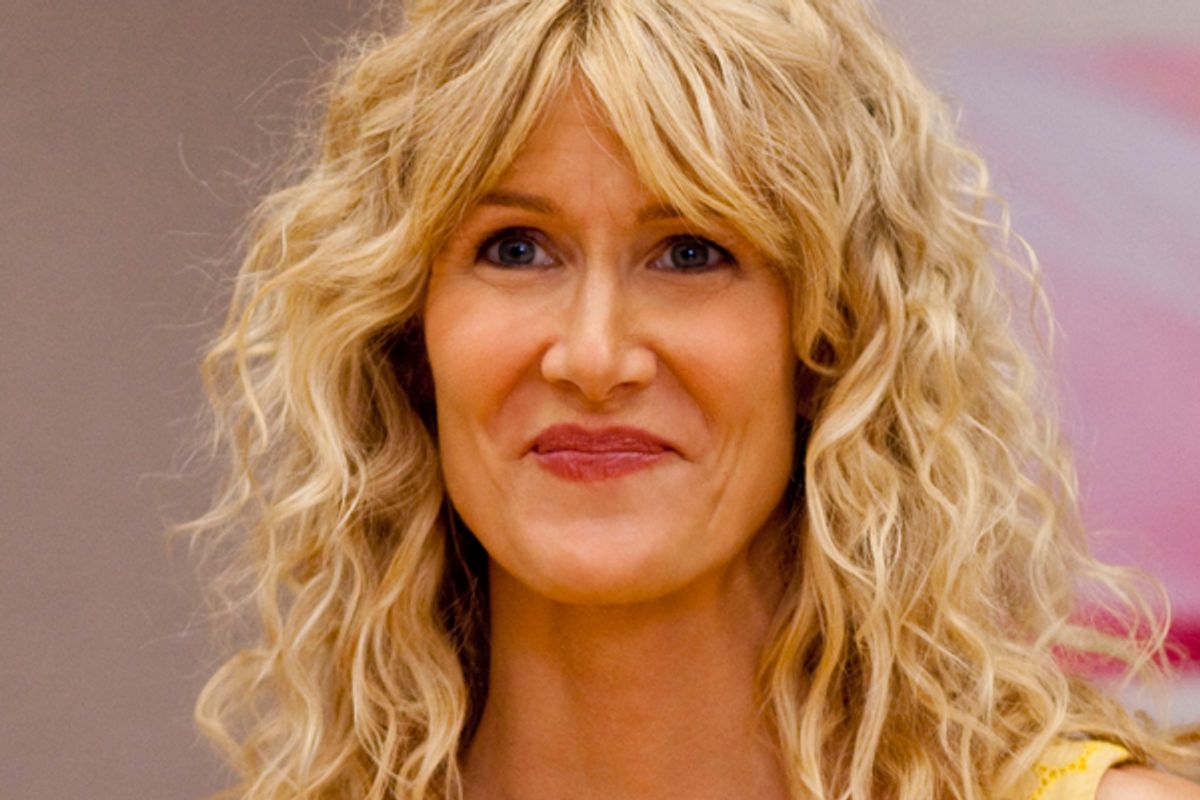 A stealth candidate for series of the year, HBO's "Enlightened" (Mondays 9:30/8:30 Central) is about an office drone named Amy Jellicoe (Laura Dern) who suffered a nervous breakdown, went away to a New Age detox and spiritual healing colony in Hawaii, then returned home to try to put her life back together. I respected but didn't love the pilot -- it felt a bit too similar to other pleasant-but-not-great comedy dramas, like Showtime's likable but rather repetitive "Nurse Jackie" or "The Big C" -- so it took me a while to catch up with it; once I did, I wished I'd been on board from the start. Co-created and executive produced by Laura Dern and actor-writer Mike White, it's a remarkable series, demonstrating an appreciation of human complexity and a mastery of narrative voice rarely seen outside of the best short fiction.

White writes all the episodes, and they're directed by some terrific humanist filmmakers: Miguel Arteta (director of White's screenwriting-acting breakthrough "Chuck and Buck"), Nicole Holofcener ("Please Give") and Jonathan Demme ("Something Wild," "Rachel Getting Married"). The show is fueled by small moments in which people miss opportunities for connection or self-improvement rather than seize them. The only other TV series that can match "Enlightened" in this department is "Louie" -- and in some ways "Enlightened" might be more impressive, because it's so much more tightly structured and outwardly traditional, yet strikes emotional notes that are just as surprising.

The series manages to be corrosive and compassionate at the same time. Amy is our heroine and surrogate. She narrates parts of the series in voice-over, often accompanied by highly subjective camerawork with first-person point-of-view shots and expressionist slow-motion. The bits of the series that Amy narrates are first-person subjective. We're seeing the world, and Amy, through her perceptions; they're colored by her experience at the colony and by the supplemental reading she's being doing since she returned to Los Angeles, went back to work with a demotion, and moved in with her aging mom (Diane Ladd, Dern's real-life mom). The rest of the show could be described as third-person limited. We're seeing Amy -- and all the other characters, including her mother, her still-drug-addled ex, Levi (Luke Wilson), and her new boss, the socially inept, profane, hot-tempered Dougie (Timm Sharp) -- from a detached point-of-view, one that conveys the fullness of the characters' self-flattering delusions even as it looks through them and sees something like the truth about them. I dislike the self-help phrase "tough love," but it fits here. Judging from what's on-screen, there's no doubt that White and Dern appreciate and empathize with all of these characters even though they don't cut them so much as a millimeter of slack. What we're seeing isn't a cliched "edgy" indie film worldview -- a variation of "I love humanity; it's people I can't stand." "Enlightened" is richer than that. It's merciless yet somehow not misanthropic. The tone is about as warm as can be without turning gooey.

"Enlightened" is probably the sharpest satire of modern white-collar work since the original British version of "The Office," and its skewering of this world intertwines with its portrait of individual personalities so deftly that you can't separate them. White has a social satirist's keen ear and eye. He captures the unsettling blandness of office protocol, politics and jargon, from the chill that workers feel when Human Resources calls them out of the blue to the impressive-sounding word salad labels that the company gives to its departments and projects. (The experimental department to which the newly demoted Amy is assigned is called "Cogentiva." In tonight's episode and next week's, we finally learn exactly what it's trying to do, and it's chilling -- a program that pushes the dehumanizing aspects of modern work to new depths.)

The series generates great tension and unease from fleeting moments in which characters try to assert power and influence over each other and come up against their own limitations. A running joke in the show's first season found Amy, who was a supervisor until she freaked out and got fired, trying and failing to arrange a lunch with Krista (Sarah Burns), the former assistant who took over Amy's job. The show's graceful handling of this bit of business is but one example of its sophistication. When the slightly flustered, uncomfortable Krista begged off the invitation and told Amy she was going to just eat lunch at her desk, then showed up with co-workers at the same restaurant where Amy was eating lunch, we were encouraged to laugh at Amy's sputtering anger at being lied to and disrespected; but at the same time, the show acknowledged that a real offense had been committed. Amy had been mistreated by Krista -- very likely in more or less the same way that Amy had mistreated Krista back when Amy was the boss of that department. Powerful people don't have to consider the feelings of less powerful people; it's just a hard fact of life. "Enlightened" gets that. But when Krista tried to make peace by inviting Amy to lunch, and Amy turned her down to go out with one her Cogentiva co-workers, Tyler (Mike White), "Enlightened" didn't frame it as a crowd-pleasing comeuppance, but as an example of Amy's growth, and as a rare, bright moment for the morose, skittish Tyler, who has a crush on Amy. These are the types of interactions that we rarely see on TV because most shows consider them trivial. And yet we encounter them all the time in real life, and they're not meaningless; in fact they're as revealing of character, and of our individual stations in life, as much bigger and more obviously dramatic moments.

The show's take-no-prisoners view of individual delusion is bracing, too. "Enlightened" doesn't just see people clearly; it sees through them, identifying every instance of selfishness, self-deception, hypocrisy, cruelty and stupidity as it happens. And yet I never feel that "Enlightened" is looking down its nose at anyone -- not even Amy, a chirpy eccentric and entitled brat who seems to think she's the adorable lead in a Hollywood movie and can do whatever she wants, secure in the knowledge that she'll be loved no matter what. Amy isn't on drugs anymore -- and the fact that Levi still is was a source of tension in the pilot -- but her behavior still has a pungent whiff of the addict's monstrous narcissism. She's late to work every day and always has a lame excuse, and even though she's been working in the department for several weeks, she never does any meaningful work, and still seems to have no sense of what, exactly, they're all doing down there in that brightly lit basement office/laboratory. (This becomes a source of agonizing comedy in tonight's episode and next week's, during which her disastrous attempt to set Dougie up with a co-worker epically backfires, dragging the entire department into a human resources quagmire.)

There's an opportunistic spaciness to Amy that's nearly horrifying at times. You understand why Krista wouldn't want to have anything to do with her, why Dougie finds her exasperating, and why most of her co-workers look slightly panicked whenever she tries to talk to them. Amy always wants something. As far as she's concerned, other people exist to make her own life easier and to bail her out when she fails, and when other characters call her on this, she seems stunned, almost baffled, as if they've suddenly begun describing another person, somebody Amy doesn't know or care about. Almost every episode contains one or more scene that I call "TV radio" because the behavior is so mortifying that I just can't watch it; I have to listen to it while sort of half-watching it. (The comedy of mortification is an art in itself, and it has always had a home on HBO, starting with "The Larry Sanders Show" and continuing through "Curb Your Enthusiasm" and the underrated, often deeply unsettling "The Comeback.")

And yet the show never reduces Amy to a loathsome cartoon or a walking punch line. She's hard to hate because she means well, and as irritating and often clueless as she is, she truly is trying to be a better person. (We could see this clearly in the Nov. 14 episode, "Sandy," starring Robin Wright as a friend from the colony who seemed much more at peace than Amy, but turned out to be a lot more dysfunctional.) Amy is hampered by old, bad habits, and by personality traits that she was probably born with, and the more examples we see of her home life, the more we sense that she was grievously wounded during childhood, perhaps by her mom (who seems like a rather cold person) and perhaps by the death of her father as well. In some ways she's emotionally still a teenager inside -- perhaps a little girl. She's always acting out, always trying to separate and define herself in all the wrong ways. Her resentment at her mother for not letting her borrow the car boiled four decades of tension down to a single conflict, and that teddy bear on her bed becomes more poignant by the week. She's drawn to underdogs, rebels, victims and martyrs, to the point where she seems to be trying to give other people the heroic help and emotional support that she probably never got herself. She spends her workdays surfing the Internet and reading about social justice and pollution issues related to her company. In the Nov. 7 episode, "Not Enough Good Mothers," we saw her become obsessed with an undocumented mother who got deported. It's as if she's filling up her days with actual and imagined crusades, trying to improve the world in order to avoid having to remake herself.

But in those expressive, narrated first-person sequences, we sense that a better Amy is possible, and that her time at the colony probably did her some good. The incantatory buzzwords and phrases seem to center her; when she invokes them, an enveloping tenderness seems to flow out of her, coloring the whole world -- everything that she can see and hear and feel. The title of the series is an ironic joke -- Amy is not enlightened, not really -- but it's also a promise, one that the heroine just might deliver on.