The city that floats

Want more waterfront? Need room for garages or playgrounds? In the future, they\'ll float -- and the future is now 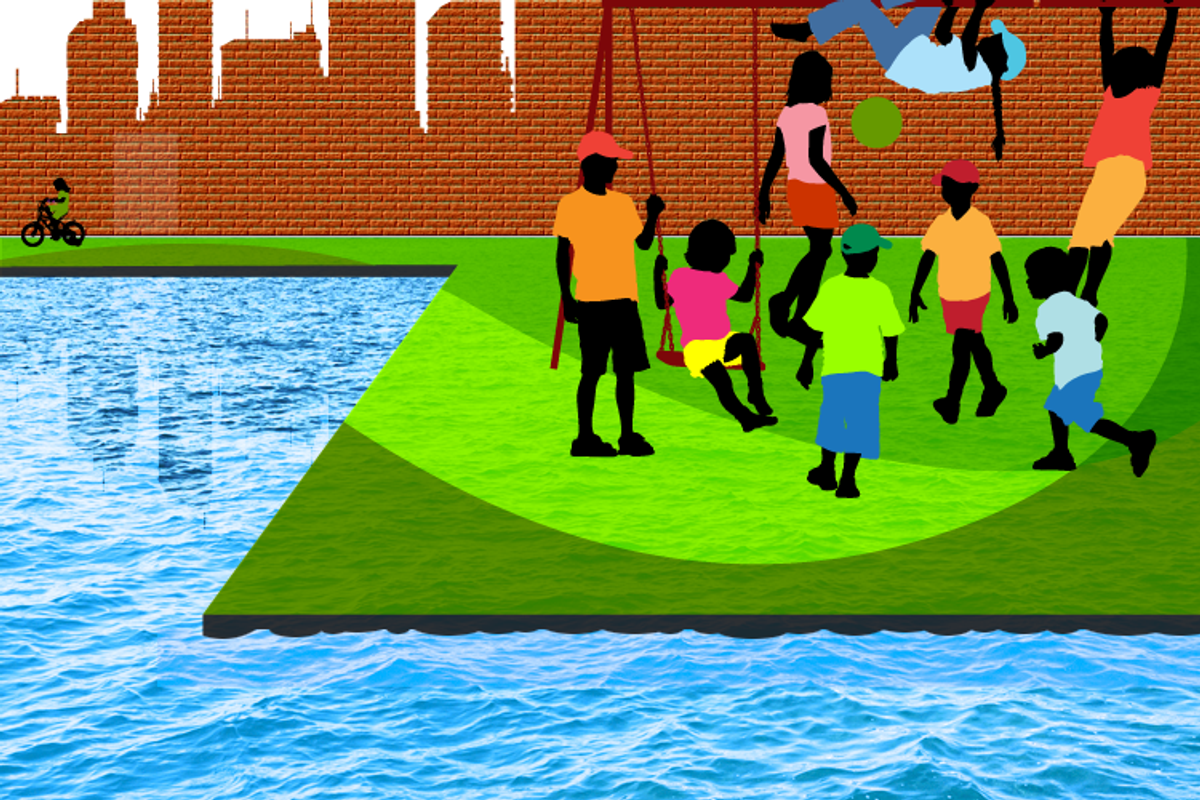 This is the second story in a new series called Dream City, which will explore the way we're designing our cities of the future, cities in which we want to live, right now. Yesterday, we wrote about some of the most creative ideas being tried around the world. And tomorrow, we'll look at the growing trend of removing freeways from downtowns to create new pedestrian spaces.

Whether out of High Line envy, Olympic fever or a pining for its days as a naval superpower, London has hatched a plan -- a big, wet one -- for the north bank of the river Thames. A sleek, kilometer-long floating promenade running from the Tower of London to the Millennium Bridge, London River Park will create an instant walkable waterfront in a stretch of the city where there is none. The 33-foot-wide thoroughfare will have spacious walkways, enclosed pavilions for exhibitions and performances, a public swimming pool, a ferry dock, trees, benches -- all bobbing gently on the surface of the river. "The sheer beauty and design brilliance of this structure will provide yet another amazing attraction for the capital," said Mayor Boris Johnson.

But the most intriguing thing about London's plunge into the drink is that it's not unique. Around the world, a combination of new design technologies, cleaned-up waterfronts, and a demand for more elbow room has persuaded cities to hike up their trousers and wade into their waterways. Next month, a floating parking garage for 120 cars will open on the Moscow River. New York City's first floating public pool has been a smash hit since it was introduced in 2007. And two years from now, construction will begin on the world's first floating apartment complex in soggy, below-sea-level Holland.

Humans have always been entranced by the idea of a city built on water. Spanish conquistadors marveled at Tenochtitlan, the Aztecs' "Venice of the New World," parts of which seemed to be suspended on the surface of Mexico's Lake Texcoco. More recently, libertarian seasteaders have gotten press for their aspirational "floating countries." Developers are drawing up schematics for cities built on barges (the ultimate gated communities). And high-concept design firms are forever churning out renderings of floating extraterrestrial embassies, solar fields and marinas, turning our climate-change fears into fetishized futurism.

That's all great if you're a billionaire from Dubai. But back here on earth, if you're a middle-school student from Detroit, having a playground floating near your all-concrete barrio might be more important. That type of small-scale, ultra-functional waterborne infrastructure has the potential to transform urban neighborhoods over the next decade, especially those lacking in public amenities. "Over the last 100 years there have been changes in how cities grow," says Koen Olthuis, principal architect at Waterstudio, a design firm in the Netherlands that specializes in waterborne architecture. "The vertical city with the invention of the elevator. The underground city with the metro systems. Next will be the water."

Easy to say for a guy whose livelihood depends on such a future. But Olthuis' vision isn't all that implausible. He says that the technology is already there -- a floating 18-hole golf course designed by his firm will break ground in the Maldives next year -- and adds that because their stability increases with size, larger floating structures are easier to engineer. Plus, as cities grow and density increases, the price of land will only go up, which could make real estate on water a competitive value. "Boulevards, parking, green zones and things that don't bring in money, you can put on the water," says Olthuis, "and save the land for high-density development." Amsterdam, the floating-architecture capital of the world, has already put playgrounds and markets in its canals.

Even as a simple space-saver, floating structures would be a valuable new tool for cities. But what could make them a game changer is their capacity to be "plugged in" where they're needed and when they're needed. Waterborne spaces fit perfectly with "temporary urbanism," an ideology that's gaining traction among city planners. It's the idea that certain components of cities should be flexible, movable and fleeting -- as opposed to permanently anchored in one place and built to last. As it happens, these are qualities inherent to waterborne infrastructure. Cities could conceivably move, swap, sell or lease floating components as they see fit. "I compare a city with a smartphone," says Olthuis. "You buy your own apps to make your phone perfect for you. Cities can connect their own apps to their city grid and change over time as their needs change." Case in point: New York's floating pool first docked near the Brooklyn Bridge to publicize its existence, then moved to the Bronx, where it was really needed, to serve a neighborhood without swimming facilities.

This notion of a physically maneuverable city, where parks, pools and parking garages can be shifted around at will, is a radical redefinition of what makes a city -- and also, strangely, no big deal. That's because floating architecture is less likely to run into the obstacles that most often inhibit urban development, like NIMBYism, space constraints and environmental impact. When New York Mayor Michael Bloomberg tried to built a stadium on Manhattan's West Side, the development ran into considerable opposition and was ultimately left for dead. Imagine if you could tug the same stadium in on a floating platform, park it just offshore and eliminate those problems. You could even lease it, says Olthuis, if you only needed it for a short-term sporting event.

Singapore has already done just that. The super-dense city (built on islands, just like New York) constructed Float@Marina Bay in 2007, a floating steel structure weighing more than 1,000 tons that hosts soccer games, concerts and graduation ceremonies with seating for 30,000 spectators. The venue was never meant to be permanent, and will be disassembled next year. After that, there's no reason it couldn't be sold or leased to another city, which could take it and plug it in according to the city's needs -- and when done with it, sell it again.

Best of all, once it's gone, there will be no hint that it was ever there. "Scarless development," which leaves no trace once it's removed, is one of floating architecture's big selling points. What's more, waterborne structures could generate their own energy -- one prototype of a floating city park designed by New York-based GRO Architects has built-in turbines that spin in the water's natural currents. Holland's floating apartment complex, designed by Olthuis' firm, is naturally cooled in the warmer months by the water right below it.

The technology for this stuff is booming, but it has its limits. Last week, amid concerns that a floating promenade might affect the river's tides, London decided to wait until after the queen's diamond-jubilee celebrations next June to erect it. In 2003, San Diego studied the feasibility of floating an airport off its coast, but decided that the costs and unknowns made the project too risky. And this year, a floating hydroponic greenhouse docked in New York's Hudson River, but was more science project than solution. If nothing else, it demonstrated that hydroponic agriculture can be grown in an urban setting -- especially since it sits atop the resource that farms need most.

The smaller projects are demonstrating that a barge, some sod and political will are all you need to create a little bucolic space near a neighborhood that needs one. And the technology for the bigger projects, like London River Park, is rapidly falling into place. A few more high-profile successes could mainstream what's already bubbling right below the surface.

The waterborne city is still one part reality, two parts fantasy. But remember that not long ago, a New York University campus in the desert of Abu Dhabi would have seemed insane. Twenty years from now, another one bobbing off the tip of Manhattan might not feel so crazy. (And when they're done with it, NYU can sell it to Harvard, Brown or the highest bidder.) Water was the lifeblood of cities for centuries, moving people in and around them with relative ease. Its next function could be to do the same for the physical city itself. We'd just be along for the ride.